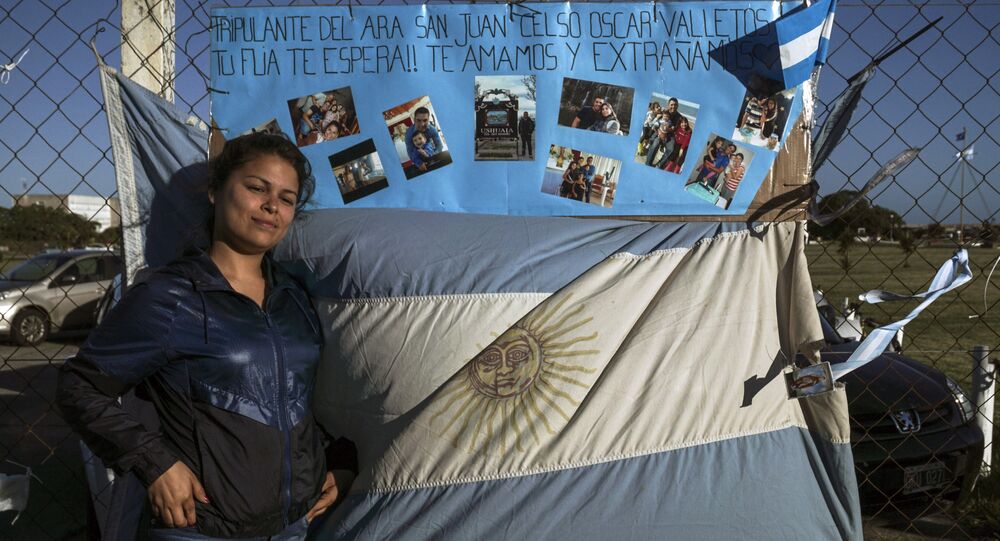 Argentina's Navy spokesperson has again voiced his concerns that the ARA San Juan sub might be running out of oxygen if it remains submerged and can't raise a tube for air as Tuesday marks the six day after it went missing.

Navy spokesman Enrique Balbi stressed that weather conditions were improving on Tuesday, which allowed the intensification of the search operation. However, concerns remain over the levels of oxygen inside the submarine, which has been missing for six days.

Balbi earlier explained that the vessel only had enough oxygen to survive for seven days if it remained underwater and due to rough conditions on the surface, it was assumed that it traveled submerged.

© AP Photo / Vicente Robles
An Argentine national flag with a drawing of a submarine hangs from the fence surrounding the naval base in Mar del Plata, Argentina, Tuesday, Nov. 21, 2017

San Juan, with 44 members on board, has been out of contact since Wednesday, November 15, when it surfaced to report a mechanical breakdown related to its batteries.

Argentine has drummed up the support of more than a dozen ships and aircraft from a number of countries. The US Navy has sent unmanned underwater vehicles using sonar to create an image of the ocean floor.

© REUTERS / Armada Argentina/Handout
A crew member of the Argentine military submarine ARA San Juan stands on the vessel at the port of Buenos Aires, Argentina June 2, 2014

The search effort has now been narrowed down to an area of 20km by 20km (12 miles), Enrique Balbi specified.

Argentina's Navy earlier reported that it has detected noises which could be those of the submarine, but later refuted any signs of communication.