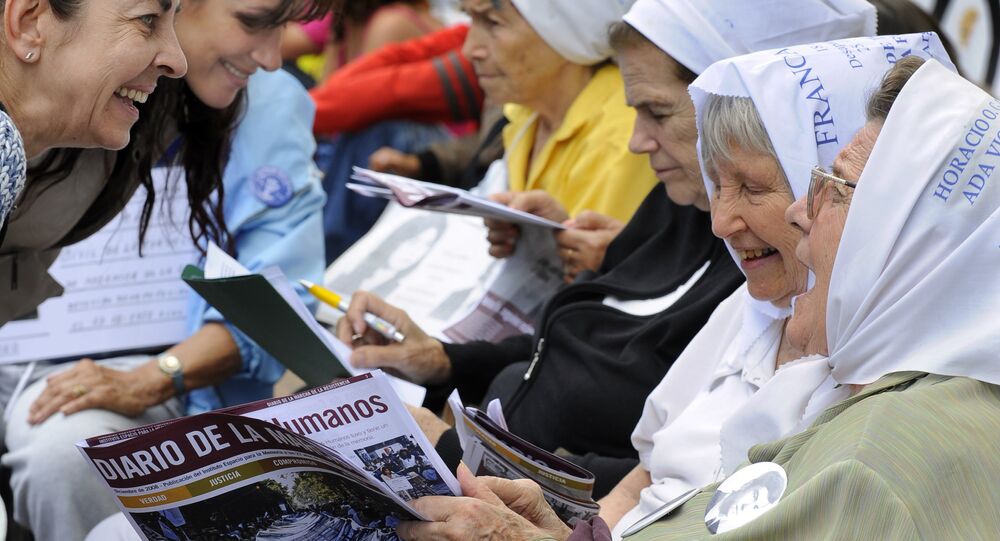 A group of grandmothers in Argentina have finally identified the daughter of Lucia Tartaglia, an activist who was abducted by the Argentinian authorities 40 years ago. The case is the 125th grandchild of a missing person the group has successfully identified.

The Grandmothers of the Plaza de Mayo — a group of women who have been meeting in the central square in the heart of Buenos Aires ever since the 1970s to demand justice for Los Desaparecidos (The Disappeared) — have found another missing "grandchild."

Lucia, a 24-year-old activist in the Peronist University Youth, vanished on November 27, 1977.

Earlier this year, a woman was told she was thought to be the daughter of Lucia and she volunteered a DNA sample which is thought to have been compared with members of Lucia's family.

On Wednesday, October 25, a court in Buenos Aires was notified of the match, and the woman was told the following day.

The 125th grandchild is the daughter of Lucía Tartaglia, who was 24 when she was kidnapped by Argentina's last dictatorship in 1977. pic.twitter.com/LMI5UxfGgh

It is understood the woman is being offered counseling and the option of meeting her birth mother's family.

"Today we find another granddaughter," said Estela de Carlotto, 87, who is one of the leaders of the Grandmothers of the Plaza de Mayo.

Years of Not Knowing

De Carlotto described the family's ordeal after Lucia went missing in the town of La Plata, where she was studying law.

"During the next year the efforts to locate Lucia by her family were in vain, they had no news of her until in November 1978, a year after her disappearance. Her brother, Aldo Tartaglia, received a first letter from Lucia where she reported that she was detained. In another letter she said that she was pregnant and that she expected to give birth in early 1979," she said.

It is not known when Lucia died but between 1976, when the military ousted President Isabel Peron, and 1983, when democracy was restored after the Falklands (Malvinas) war, more than 5,000 people were "disappeared."

Many women were pregnant when they went into custody and it is thought that Lucia may have given birth during 1978, well before the letter arrived.

Bodies Dumped in the Ocean

Hundreds of Peronist or left-wing activists, suspected of belonging to a guerrilla group called the Montoneros, "disappeared," eventually being dumped into the Atlantic Ocean from Navy helicopters and planes.

The center of the web of abduction, torture and abuse was the ESMA naval mechanics' school in Buenos Aires and several officers who served there are currently on trial for abuses.

But Lucia is believed to have been held at the Club Atletico in central Buenos Aires, a detention center which was demolished in the 1980s and is now buried underneath an elevated highway.

Lucia's baby daughter, like dozens of other children, was adopted, possibly by a military family, after she was killed and was brought up in complete ignorance of her true birth mother. The Grandmothers of the Plaza de Mayo and several other groups have spent years investigating what happened to the "grandchildren."

Lucia's daughter was eventually identified and on Thursday, October 26, it was confirmed that a sample submitted to the National Bank of Genetic Data had conclusively proved her identity.

Lucia's mother, Maria Rosario Tartaglia, died without knowing what had become of her daughter or her granddaughter.

In March 2011 Samuel Miara and 13 other officers at the Club Atletico were convicted of charges relating to the abduction of Lucia and several others. A street in the Argentine city of Santa Rosa is named after Lucia.

Last week the body of Santiago Maldonado was recovered from a river in western Argentina.

His death has chilling echoes of the disappearances, although President Mauricio Macri and his government insist Santiago's death was not foul play.