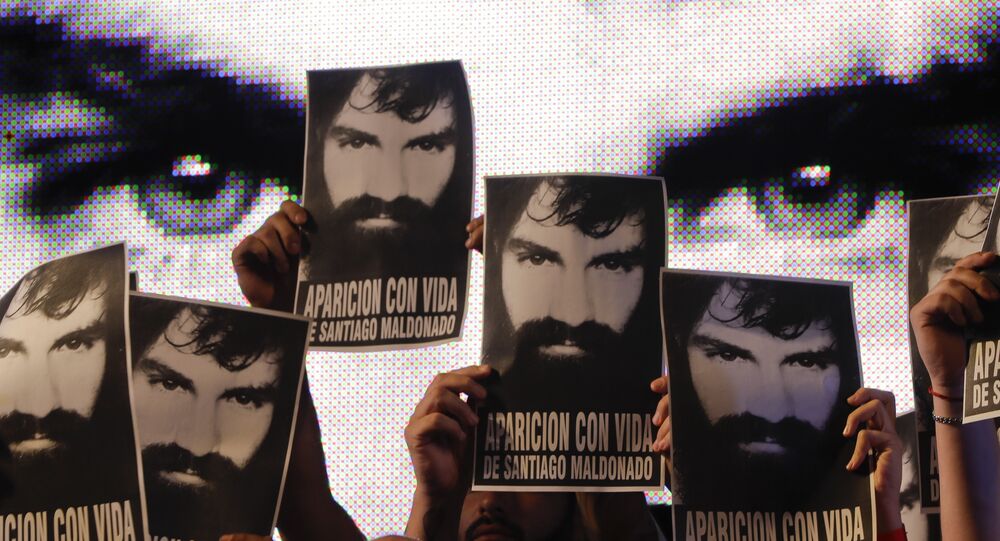 A body has turned up in a river in Argentina, two months after an indigenous rights activist had vanished. The disappearance of Santiago Maldonado has echoes of the period in the late 1970s and early 1980s when thousands went missing in Argentina.

Campaigning for elections in Argentina has been suspended after a body was found in a river close to where activist Santiago Maldonado was last seen on August 1.

​Prosecutor Silvia Avila said the body was discovered on Wednesday, October 18, in a riverbed a few hundred meters from where Mr. Maldonado was last seen.

Maldonado had been campaigning against the forcible eviction of members of the indigenous Mapuche community from land in Chubut province in southern Argentina and was seen being arrested by the military police.

Santiago Maldonado's family speaks | Andrea Antico: We are going to wait until the autopsy is completed and the body's DNA is identified pic.twitter.com/EtOn1KVQNG

Karen Granero, the editor of Sustenta magazine in Buenos Aires, said the timing of the discovery, only days before Sunday's elections for the Argentine congress, was extremely suspicious.

"Everything is too shady. Suddenly, just before this Sunday's elections a body is found, 300 meters from where the clash happened. The body was found during the fourth search of the riverbed. The family had expressed doubts and great distrust towards the government," she told Sputnik.

The body was flown to Buenos Aires on Thursday, October 19, for an autopsy on Friday, accompanied by members of Maldonado's family, who had stayed by the body where it was discovered on Wednesday.

"We stayed there from 1pm to 8pm because from the very beginning they attacked us, from day one it has all been lies, and permanent harassment. That makes us trust nobody," said his brother Sergio, who was accompanied by Maldonado's girlfriend Andrea Antico.

Maldonaldo had traveled from his home in the city of La Plata, near Buenos Aires, to support the Mapuche, who were demanding the release of their leader, Jones Huala, who faces extradition to Chile on charges of terrorism related to land disputes on that side of the border.

Huala himself tweeted sarcastically on Thursday.

Tweet: "Maldonado had ID card in his pocket because he thought to go to vote on Sunday #SayNoMore

The Maldonado family lawyer, Veronica Heredia, said it did not make sense for the body to be found upstream of where he was last seen.

The government of President Mauricio Macri had offered a 500,000 peso (US$27,000) reward for information about Maldonado's disappearance but few activists believed it was a genuine offer and there is widespread suspicion that the authorities are complicit in a cover-up.

Macri Is US Ally

Macri, a right-winger, has been criticized for being overly friendly with the United States and with foreign businesses who want to exploit Argentina.

Maldonado was taken from a Mapuche community at Cushamen in Chubut province.

Tweet: "If Nisman cleaned up his own bathroom after shooting himself, why couldn't Maldonado walk 300 meters dead? What is wrong with you people?"

A huge swathe of land around Cushamen is now owned by the Italian clothing company Benetton, and is used by them to graze sheep which produce wool for the firm's sweaters, sold in expensive shops in Europe and around the world.

The territory, which is the size of Luxembourg, is claimed by the Mapuche, who were driven out of large parts of Argentina in the 19th century in a campaign led by General Julio Roca.

Benetton has tried to oust a group from the Mapuche Ancestral Resistence movement and their supporters, which has been dug in since 2015.

Macri has pursued policies of austerity which have hit the poor hard and he has tried to divert attention away from the economy by digging up allegations of corruption against Kirchner and highlighting the mysterious death of Alberto Nisman in 2015.

Nisman was found dead, from a single gunshot, hours before he was due to testify to the Argentine Congress about his investigation into the 1994 bombing of a Jewish community center in Buenos Aires, which killed 85 people.

Kirchner's opponents have claimed he was killed to cover up links he had found between the government and Iran, who were allegedly behind the bombing.

On Sunday all attention will be on Buenos Aires province, where Kirchner is seeking election as Senator and is neck-and-neck in the polls with Macri's ally, Esteban Bullrich.