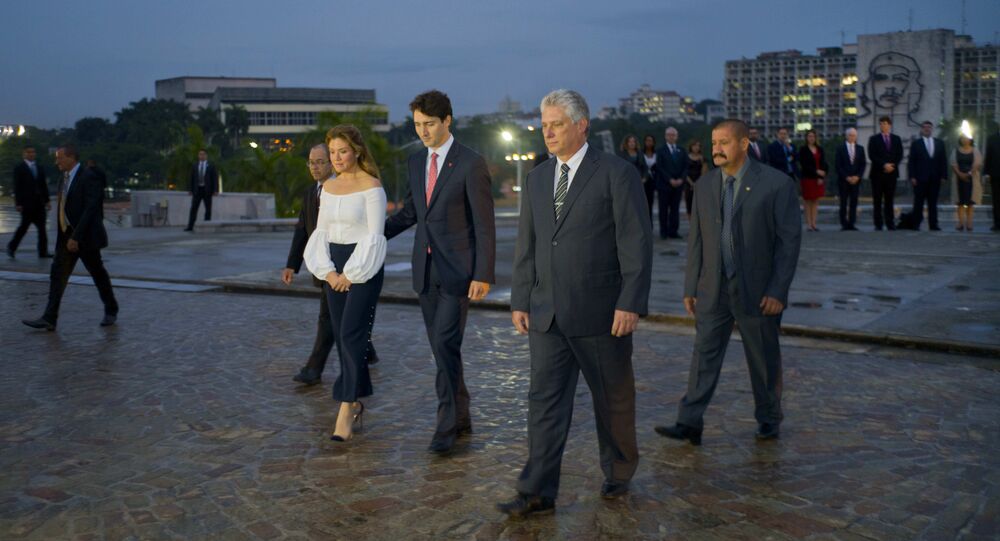 Truth to Power: Next Cuban Leader Rejects US ‘Imperialism’

Havana’s anticipated next leader, Miguel Diaz-Canel, has refuted calls by Washington to change the island nation’s ways, declaring that “changes needed in Cuba will solely be carried out by the Cuban people,” in a stark rebuttal to US political and economic demands.

After stating his intention to step down in 2018, current Cuban President Raul Castro is expected to be replaced by the Caribbean island nation's First Vice-President Miguel Diaz-Canel.

© Sputnik
Trump Moves to Kill 'Detente' With Cuba: A Policy in Need of a Pretext

Speaking on Sunday, Diaz-Canel unambiguously castigated the US for its heavy-handed economic, military and diplomatic tactics.

At a ceremony commemorating the 50th anniversary of the death of Argentinian revolutionary Ernesto ‘Che' Guevara, who participated in a Bolivian revolt that echoed the 1959 Cuban overthrow, Diaz-Canel reminded his listeners that "imperialism can never be trusted, not even a tiny bit, never."

In an apparent response to US President Donald Trump's assertion that the US embargo on Cuba would not be fully lifted until Havana adopts Washington's version of Western democracy and capitalism, Diaz-Canel said, "Cuba will not make concessions to its sovereignty and independence, nor negotiate its principles or accept the imposition of conditions,"

"The changes needed in Cuba will solely be carried out by the Cuban people," the popular 57-year-old politician added, cited by Reuters.

With no direct elections for national office in Cuba, Diaz-Canel is projected to be the likely appointed replacement to iconic figure Fidel Castro's younger brother Raul, now 86, and would make the relatively young leader the first Cuban head without the Castro name since the mid-20th century.

The US president claimed in June that sanctions on Cuba would be ratcheted back up to pre-Obama levels while concurrently gutting the staff at the US embassy in Havana.

Trump's administration has issued travel warnings to US citizens seeking to vacation in the once-popular island nation.

"Some unnamed officials are propagating unusual nonsense without any evidence, with the perverse aim of discrediting the impeccable reputation of our country as a safe destination for foreign visitors, including from the United States," Diaz-Canel claimed.