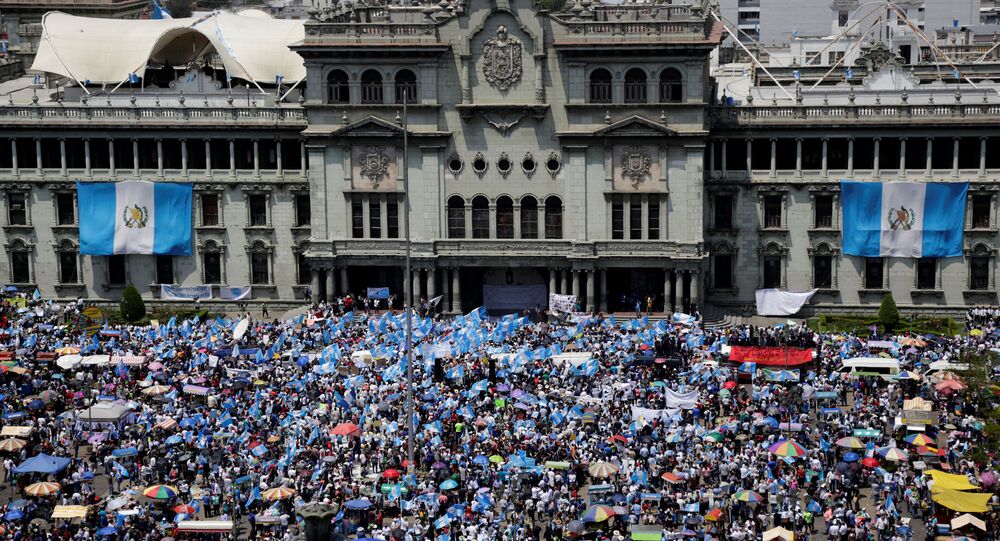 Massive protests have broken out in the streets of Guatemala City against President Jimmy Morales, who has been accused of corruption after expelling a UN commissioner investigating his administration for that very offense.

Since September 15, thousands of Guatemalans have taken to the streets to protest Morales and demand his resignation.

In August, Morales attempted to have Ivan Velasquez, the commissioner of the UN-affiliated and US-backed International Commission against Impunity in Guatemala (CICIG), removed from the country. His reasoning was that a foreign agency has no business enforcing the nation's laws.

When his foreign minister refused to sign the order, Morales fired him and replaced him with someone who would sign it. The Guatemalan Constitutional Court then blocked the order anyway.

Corruption ran rampant in Guatemala in the 2000s, leading to one senior UN official to declare in 2007 that Guatemala was a "good place to commit a murder, because you will almost certainly get away with it."

CICIG was created in 2007 to investigate crimes perpetrated by Guatemalan government officials. Among their investigations was the 2015 discovery that Otto Pérez Molina, who was president before Morales, was involved in a wide-ranging financial crime syndicate.

Pérez Molina's downfall after the scandal opened the door to Morales, a former comedian, to run as a political outsider on a socially conservative and nationalist platform. With his slogan of "Neither corrupt nor a thief," Morales was carried to victory by Guatemalans who distrusted more traditional political animals as corrupt and ineffective. However, soon after taking office in January 2016, an investigation began into claims that he had taken illegal donations from drug cartels.

Several members of Morales' administration, such as his brother Samuel, his son Jose, his vice minister of foreign affairs, his interior minister, his finance minister, and his labor minister have resigned or been arrested under corruption charges. Any similarities to this political situation to any others are only in your imagination.

However, Morales has backtracked on his criticism of CICIG after international pressure. During his speech before the UN General Assembly earlier in September, Morales pledged his full support to CICIG. The same month, the Guatemalan Congress voted to shield Morales from a full CICIG investigation.

The notion of an international commission embedded within the nation's justice system is disagreeable to Guatemalan nationalists, who argue that organizations like CICIG can damage the country's own interests.

There are also accusations that CICIG is a representative of American imperialism. In 2015, Perez Molina threatened to refuse to renew CICIG's mandate to operate in the country — but he changed his mind when then-US VIce President Joe Biden threatened to withdraw $114 million in American financial aid.