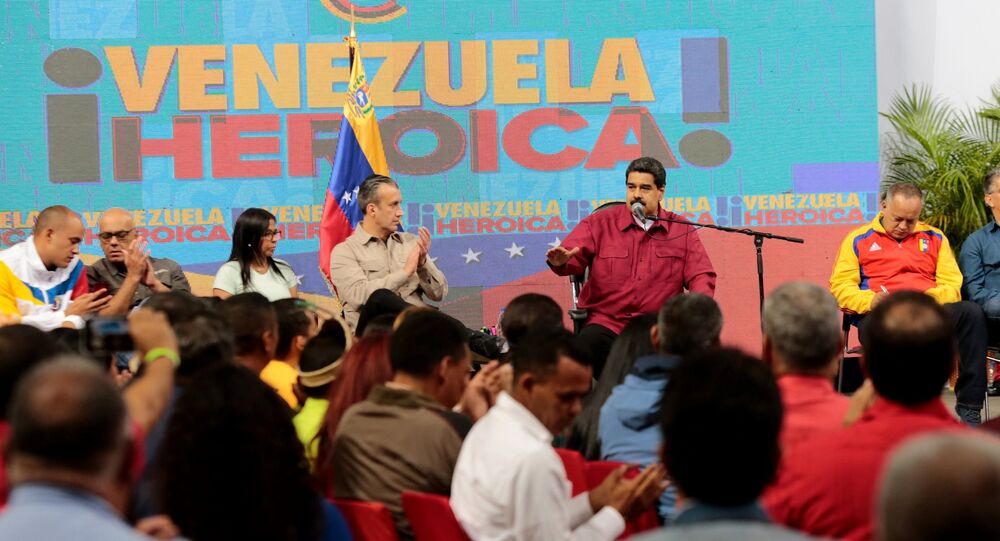 All About Oil: WikiLeaks Reveals US Objectives in Caracas as Regime Change Looms

WikiLeaks has published an excerpt from a 1988 cable between the US State Department and its Caracas embassy – "US Goals, Objectives and Resource Management for Venezuela” – which highlights the significance of Venezuela's oil reserves to US rulers.

The cable makes clear the main goal of US-Venezuela relations is to ensure the latter continues to supply a "significant portion" of the former's petroleum imports, and follows a "moderate and responsible" oil price position in OPEC.

What is the #1 U.S. interest in Venezuela? If the classified history of the U.S. State Department is a guide, oil. https://t.co/xCRNDT1oMF pic.twitter.com/8Z1e0IsKND

​The August 2 release came a mere day after US Secretary of State Rex Tillerson warned of "regime change" in Venezuela.

"We are evaluating all of our policy options as to what can we do to create a change of conditions where either Maduro decides he doesn't have a future and wants to leave of his own accord or we can return the government processes back to their constitution," Tillerson, former CEO of oil giant ExxonMobile, told a press conference.

Tillerson's comments in turn follow similar statements in July by Central Intelligence Agency Director Mike Pompeo, who acknowledged the US was working to change the elected government of Venezuela.

Pompeo's statement sparked an understandable outcry in Caracas, with Maduro slamming the US, Colombia and Mexico alike.

"[Pompeo] has said the CIA and US government is working in direct collaboration with the Mexican and Colombian government to overthrow the government and intervene in Venezuela. I demand the governments of Mexico and Colombia properly clarify the declarations and I will make political and diplomatic decisions accordingly before this audacity," he said.

Venezuela's government faces major challenges at present, with food shortages and soaring inflation — sparked by the US' protracted unofficial economic war against the country — being further exacerbated by a fresh wave of US sanctions.

© REUTERS / Carlos Garcia Rawlins
Venezuelan Parliament Urges Prosecutors to Investigate Possible Fraud in Recent Elections
Also on August 2, the opposition-led Venezuelan parliament unanimously agreed to authorize the Office of the Prosecutor General to open an investigation into possible electoral fraud during the recent elections to the country's Constituent Assembly.

Antonio Mugica, CEO of Smartmatic, which provides electronic voting systems worldwide, said the results of the election were manipulated, and the actual turnout might differ by at least one million.

WikiLeaks' exposure is not the first time the secrets publisher has released comprising internal US documents on Venezuela.

In July 2016, a series of leaked emails showed that during her time as Secretary of State, Hillary Clinton promoted subversion against the Latin American country, despite public appeals for friendship — she asked then-assistant Secretary of State for Western Hemisphere Affairs, Arturo Valenzuela, how best to "rein in" Chavez, who suggested reaching out to other regional partners to help undermine his leadership.

The document detailed the embassy's five core objectives in Venezuela since 2004, which included:

The memo also made clear the pivotal role played in destabilization efforts by the US Agency for International Development (USAID) and Office of Transition Initiatives.

In total, USAID spent over one million dollars on organizing 3,000 forums that sought to essentially reconcile Chavez supporters and the political opposition, in the hopes of slowly attracting them away from Chavez' side.

Despite the US' evident ambitions, their efforts may run into trouble — after all, Venezuela is not without regional advocates.

The Cuban government has denounced the "well-planned international operation" against the country, "directed from Washington" and aimed at "silencing the voice of the Venezuelan people."

A spokesperson said the US-led campaign sought to ignore the will of Venezuelans and "impose surrender by means of attacks and economic sanctions."

It's not merely in Venezuela that the US is accused of destabilizing the elected government. Bolivian President Evo Morales, citing information sourced from WikiLeaks cables, has alleged the US government gave at least US$4 million dollars to anti-government separatist groups from 2006 — 2009. Morales, of the leftist Movement for Socialism party, has pursued land reform and the nationalization of the country's natural resources, policies that have invariably provoked US ire when pursued in the region.