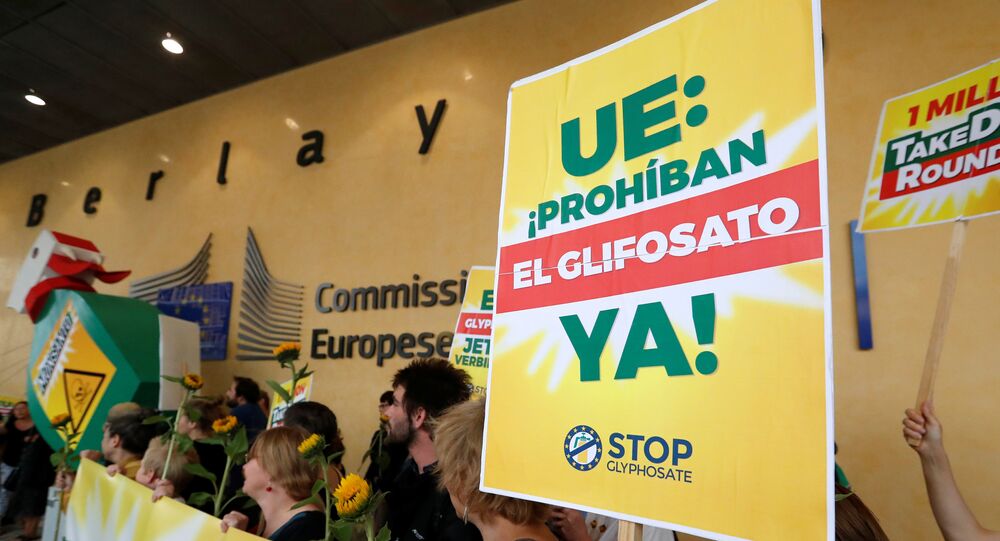 Beekeepers in Latin America are aghast that their livelihoods are being ruined by the contamination of local ecosystems with the controversial glyphosate herbicide produced by agrochemical giant Monsanto.

© REUTERS / Charles Platiau
Monsanto Wrote False Studies That Influenced EU Guidance on Pesticide Safety
Beekeepers in Latin America are bearing the cost of Monsanto products which are a threat to the environment and public health.

The herbicide glyphosate is the active ingredient in the Roundup weed-killer produced by agrochemical giant Monsanto. The company, which is awaiting approval from authorities in the EU and US for its merger with German chemical giant Bayer, was for many years the only licensed producer of the pesticide.

In 2015, the International Agency for Research on Cancer (IARC) declared glyphosate a "probable human carcinogen," which led to calls from health professionals and campaigners for the substance to be banned. In France, the Ecology Ministry banned its use in nurseries and garden centers.

"In our country glyphosate is applied to more than 28 million hectares. Each year, the soil is sprayed with more than 320 million liters, which means that 13 million people are at risk of being affected, according to the Physicians Network of Sprayed Peoples (RMPF)," Argentina's union of medical professionals, Fesprosa, stated in 2015 in a call for the substance to be banned.

However, application of the controversial chemical has only increased and it has had a knock-on effect on ecosystems across Latin America, Sputnik Mundo reports.

Uruguayan beekeepers say they are in fear for their livelihoods as a result of the use of glyphosate. It seems that their bees are collecting nectar from plants treated with glyphosate and producing honey that contains large amounts of the substance.

In August 2016, the EU discovered that the amount of glyphosate in Uruguayan honey exceeds the EU limit of 50 parts per billion, or 0.05 milligrams of the substance per kilogram of honey. As a result, the import of Uruguayan honey was stopped and the honey that had already been transported to Europe was difficult to shift. The Uruguayan government set up a commission to find out the source of the excess glyphosate.

"It would have been unprofitable to withdraw the products back to Uruguay, it was better to sell it cheaply in Europe. This was a serious blow to beekeepers who had already been forced to lower their prices in the past," Riera explained.

"In three to four years, if glyphosate continues to poison honey, then beekeepers will simply be ruined. It doesn't matter how the herbicide got into the honey, if the production model doesn't change then everything will stay the same. What's the point in knowing that glyphosate is in rivers, streams, the nectar of flowers, if the glyphosate contamination remains the same?"

© AFP 2020 / Michael B. Thomas
'Tribunal' Launched to Prove Monsanto Committed Ecocide
Uruguayan honey is also exported to the US, where there is currently no limit on the amount of glyphosate in food. However, that could change since California declared glyphosate a carcinogen earlier this month. Monsanto responded with a pledge to "aggressively challenge" the decision.

"It is likely that the ban [on glyphosate] will spread to the United States, there are signs of alarm in other states. If there is widespread discontent, the United States could establish controls on the import of our honey," Riera said.

"The medical literature clearly describes the risks to the population as a result of consuming products with traces of glyphosate. We can't yet accurately determine a cause-and-effect relationship, but there is great suspicion that glyphosate is the reason [for more human cancers]."

Concern about the impact of glyphosate continues to mount. Last week, a study carried out by the US Organic Consumers Association (OCA) found glyphosate in 10 out of 11 samples of Ben and Jerry's ice cream and called on consumers to boycott the product until it puts an end to the contamination.