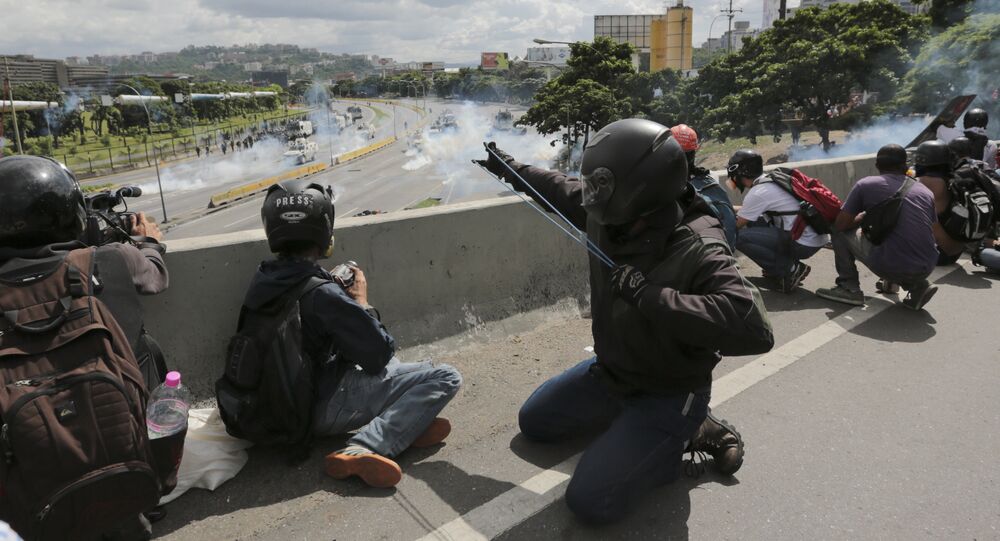 The election of members of the Constituent Assembly, which will be charged with amending the Constitution, took place on Sunday in Venezuela amid domestic rallies and international criticism, with protests on the day of the voting leaving at least 10 people dead.

© REUTERS / Marco Bello
Over 41.5% of Venezuelans Took Part in Constituent Assembly Election
MEXICO CITY (Sputnik) – According to the National Electoral Council, the voter turnout was just over 41.5 percent. However, after publishing photos of empty polling stations throughout the day, the country's opposition is now disputing the figure. Maduro's opponents suggest that only about 10 percent of voters came out to cast their ballots.

Months of protests that began in April have left more than 100 people dead. According to the country's Public Prosecutor's office, the investigation is underway into the deaths of 10 people during the Sunday rallies. And while protest rallies had been officially prohibited before the vote, this did not stop the demonstrators.

Venezuela's President Nicolas Maduro convened the Constituent Assembly to restore peace in a beleaguered country, but the opposition fears that a new legislative body would only serve to solidify the current government's hold onto power.

The opposition staged strikes on Wednesday and Thursday. The day of the vote itself was marred by violent clashes between protesters and the police. A grenade explosion at a polling station in the city of Valle De La Pascua left six people injured.

The 545-member Constituent Assembly will be able to start working as soon as on Wednesday. Maduro said on Sunday that one of the first things that had to be done would be reforming the country's public prosecutor's office. Venezuelan Attorney General Luisa Ortega Diaz emerged as a critic of the government. In the run-up to the election, Ortega Diaz said that the administration was violating the constitution, and that the Sunday vote would present a choice between continued existence or the establishment of a totalitarian system. Ortega Diaz herself is currently under an administrative investigation for abusing her position as attorney general.

Henrique Capriles Radonski, the governor of the state of Miranda and a senior opposition leader, reportedly said on Sunday the vote was "fraudulent." The Democratic Unity Roundtable (MUD) opposition coalition announced new protests earlier in the day on Twitter, while the Peruvian Foreign Ministry said it would call an emergency meeting of American nations, expected to be held on August 8.

Caracas said in April it would be withdrawing from the Organization of American States. Its membership of a sub-regional Mercosur trade bloc has been suspended since December, and the member states are reportedly considering Venezuela's expulsion. A number of countries in the region have sharply criticized Caracas, starting from April, when the Venezuela's top court made a decision to curb the powers of the National Assembly, which triggered a wave of protests that did not subside even as the decision was later reversed.

The United States has promised to impose economic sanctions on Venezuela if it proceeded with the Constitutional Assembly. The sanctions might reportedly target the oil sector, which has the potential to hurt an already struggling economy. The Venezuelan government largely relied on revenues from oil, its major export, to fund social programs. However, the plunging oil prices rattled the country's economy, which reportedly led to food and medicine shortages.

Maduro immediately dismissed the US warning of sanctions and emphatically reinstated his position at a rally on Sunday, saying that the Venezuelan government was interested in what its people had to say rather than the opinion of US President Donald Trump.

US Condemns Venezuelan Election to Constituent Assembly - Department of State