President of Venezuela Nicholas Maduro respects the decision of the Supreme Court to transfer opposition leader Leopoldo Lopez from prison to house arrest and expects him to correct, local media reported Saturday.

MEXICO (Sputnik) — Earlier on Saturday, the Supreme Court of Venezuela had released Lopez from prison, where he was from 2014, due to health issues, and transferred him to house arrest. Lopez already called on his supporters to continue protests against Maduro.

"I respect and, I will say more, support this decision. God bless, if this measure is understood, and Lopez will deliver a message on correction and peace in the country," Maduro said, as quoted by NTN24 television channel.

Earlier, the United States welcomed Lopez's transfer to house arrest and called on the country's authorities to release all political prisoners. 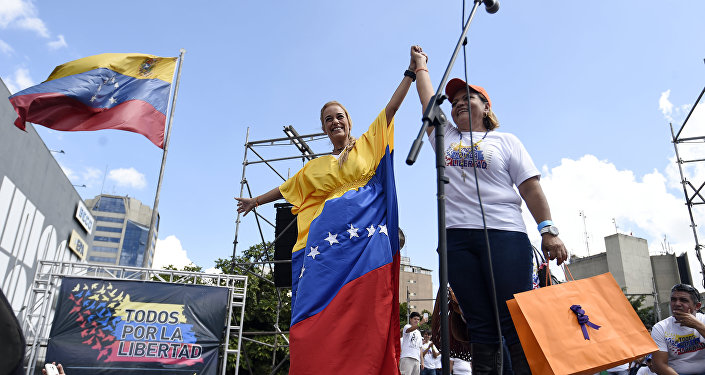 © AFP 2019 / JUAN BARRETO
US Welcomes Release of Venezuelan Opposition Figure Lopez From Prison
In 2014, a series of protests began in Venezuela due to high levels of violence, inflation, and shortages of basic goods in the country. The Venezuelan government accused the opposition of coup attempts and arrested a number of its leaders. In September 2015, Lopez was sentenced to 14 years of prison for inciting violence during 2014 street protests that led to the death of dozens of people, both opposition and authorities' supporters.

The country is still suffering from the political and economic instability that sparks protests. Since April, protests escalated after the Supreme Court’s decision to restrict the powers of the National Assembly. Even though the decision was reversed, opposition supporters demand resignation of the court’s judges and holding early elections. According to recent reports, more than 90 people have lost their lives during protests.