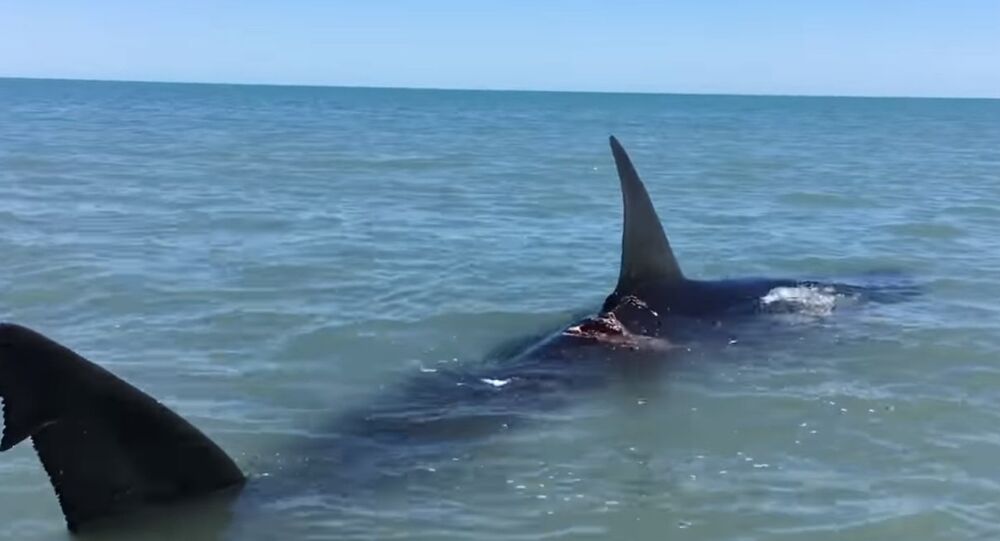 A dive boat operator in Baja California, Mexico captured an injured great white shark thrashing about in the shallow waters near his house in the town of Puertecitos.

When Dale Pearson and his friend first saw the large animal they thought it might be a hammerhead shark or a beached whale, and Pearson began filming it on his phone.

As he moved closer Pearson realized it was actually a 14-foot long great white shark swimming in about three feet of water.

​The video went viral after Pearson posted it to the Facebook page of his company, Pearson Brothers winery.

Pearson cautiously stayed behind the shark in waters too shallow for the fish to swim, knowing the animal tends to have difficulty moving backwards. A large open wound can be seen in the video behind the shark’s dorsal fin, an injury Peterson said likely was inflicted by a boat propeller.

Officials at the Marine Conservation Science Institute agreed with Pearson, sharing the video to their Facebook page and explaining that 'the injuries from the boat propeller would likely not kill the shark," and that the animals are "exceptionally tough with incredible healing ability."

Thinking the shark entered shallow waters while hunting for sting rays, Pearson commented under the Institute’s post, "I didn't want to get close enough to the front to allow her to have a reason to possibly feel threatened or defensive."

Though the shark didn’t approach them, Pearson and his friend were attacked by stingrays, showing off their injuries at the end of the video.

Pearson said later, "If you’re wondering if there’s great white sharks here in the Sea of Cortez, the answer is absolutely."

Warmer months often see an increase in shark attacks and sightings, and in May some South California beaches had to be evacuated when a helicopter spotted 25 sharks. A mother of three from North Carolina lost her arm earlier this month being attacked by shark as well.

The year 2015 saw a record 98 shark attacks, a considerable uptick from 72 the year before. Eighty-one were recorded in 2016.

US Marine Takes on a Giant Shark Barehanded