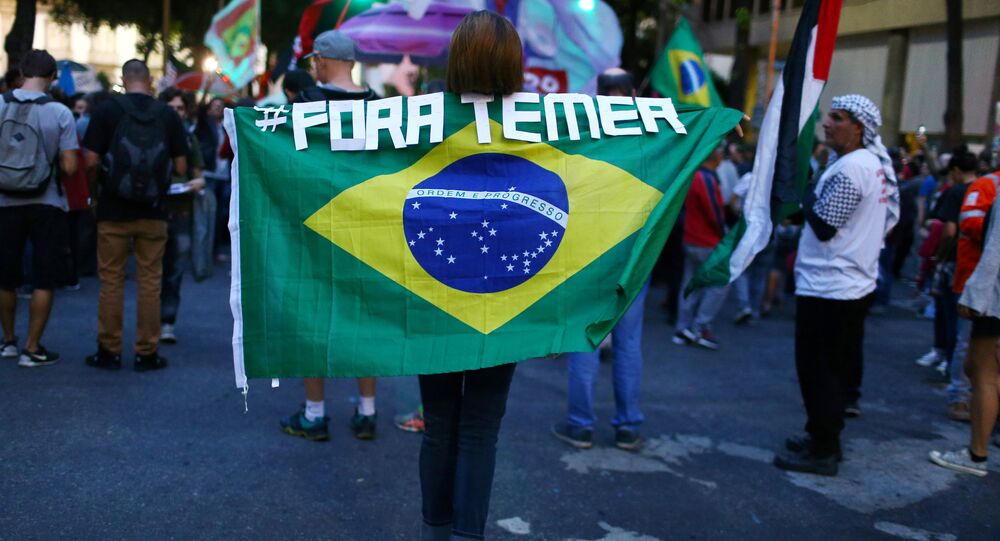 Temer has allegedly sanctioned a Brazilian businessman's continued payments to silence a witness in a probe into the nation’s state oil company Petrobras, a report published by Brazilian Globo media outlet suggested on Wednesday. The president has denied any wrongdoing and said he would not stand down.

Also on Thursday, Brazil's Supreme Federal Court approved the request for an investigation into the case from federal deputy Alessandro Molon, which raises the prospect that Temer might face impeachment proceedings.

Cristovam Buarque, a senator from the Popular Socialist Party [PPS] in the state of Pernambuco, told Sputnik that Temer's denial of wrongdoing is a mistake.

"I think this is a serious mistake, a mistake of historic proportions – unless he [Michel Temer] can prove that all this a lie. Since I don't believe that it's a lie, because in that case we would have to dismiss all journalists, all the owners of newspaper, radio and television, he made a mistake," Buarque said.

"He should have come on the television, radio, newspapers and said to the Brazilian people, 'I achieved the beginning of recovery of the Brazilian economy, inflation had fallen, the dollar had fallen [in relation to the real. But some things have happened that have undermined confidence in me as a person who can hold the post of President," Buarque said.

Temer was a key figure in the impeachment of his predecessor Dilma Rousseff. In September last year, he admitted that Rousseff was impeached by her parliamentary colleagues because of her opposition to his party's economic plan to cut social programs and privatize public assets.

João Capiberibe, a senator from the Brazilian Socialist Party [PSB] told Sputnik Brasil that the President will probably be forced to resign in the coming days.

"He said, 'I'm not resigning now. That means, that he might resign in a few days,'" Capiberibe said.

"I don't think the President will be able to survive the next week without resigning. In any case, the [opposition] parties PSB, Democratic Labour Party [PDT], the Communist Party of Brazil [PCdoB], the Party of Socialism and Freedom [PSOL], the Sustainability Network [REDE] and the Workers' Party [PT] have handed a petition for impeachment to the Secretariat of the Chamber of Deputies."

"There are different scenarios for the president's departure from his post. The first is to resign, this would be the quietest, fastest and most painless way for us to overcome the political crisis, and consequently the economic one in which the country has been living for more than 2 years. The second is the verdict of the Supreme Electoral Court, which is set to hear the case against Dilma and Temer," Capiberibe said.

On August 31 2016 the Brazilian Senate impeached President Dilma Rousseff after finding her guilty of illegally manipulating the government budget by moving money between accounts in order to mask deficits. However, Rousseff denied any wrongdoing and maintained that shifting money between budgets was also common practice among her predecessors.

As Rousseff was facing impeachment proceedings, several members of her government were also embroiled in a corruption scandal involving Petrobras, which alleged that government and Petrobras officials awarded overblown contracts to Petrobras contractors in return for bribes.

Temer's leftist opponents previously tried to impeach him in November, after former Culture Minister Marcelo Calero accused Temer of pressuring him to allow construction of luxury apartments in a historic district of the northeastern city of Salvador. The president denied the allegations, but admitted speaking to Calero about the matter.

© REUTERS / Nacho Doce
Thousands of Brazilians Rally Against President Temer
Capiberibe said that the impeachment process against Temer is likely to be faster than that against Rousseff.

"I am sure that this process will be much quicker [compared to Dilma's impeachment], if only because Temer's allies are now leaving the government. The PSDB also supported the petition for impeachment. De-facto, Temer is being abandoned by his supporters and this simplifies and speeds up the process of impeachment."

"I think that Temer won’t get to the end of next week as President. But I'm worried about what comes next, not least because we have a big problem in parliament. The parliament has problems with public opinion, it does not have trust and legitimacy [in the eyes of people] since corruption investigations are ongoing against more than 100 deputies."

"The only legitimate, constitutional alternative that we have is are indirect elections. The Senate and the House of Deputies will elect the next President to act until the end of 2018 [that is, until new elections are held]. But it seems to me that the public won't like this scenario, it doesn't believe the parliament has sufficient legitimacy to elect a new President of the Republic. But for the time being this is a legitimate, constitutional alternative. At the same time, the parliament is already considering proposals for direct elections," Capiberibe said.

Roberto Requiao, PMDB senator from the state of Parana, told Sputnik that Temer should resign.

"Temer made a mistake. He doesn't have the popular support to govern. The reforms he proposed are rejected by the majority of Brazilians … and the testimony about his assistant, Rodrigo Rocha Loures, altogether strips him of the right to rule the country. Brazil needs to have a great political debate. What we heard from the recording of the conversation with JBS, quite clearly showed that corruption in the highest echelons of politics and business in Brazil is endemic. The people can't bear this any longer," Requiao said.