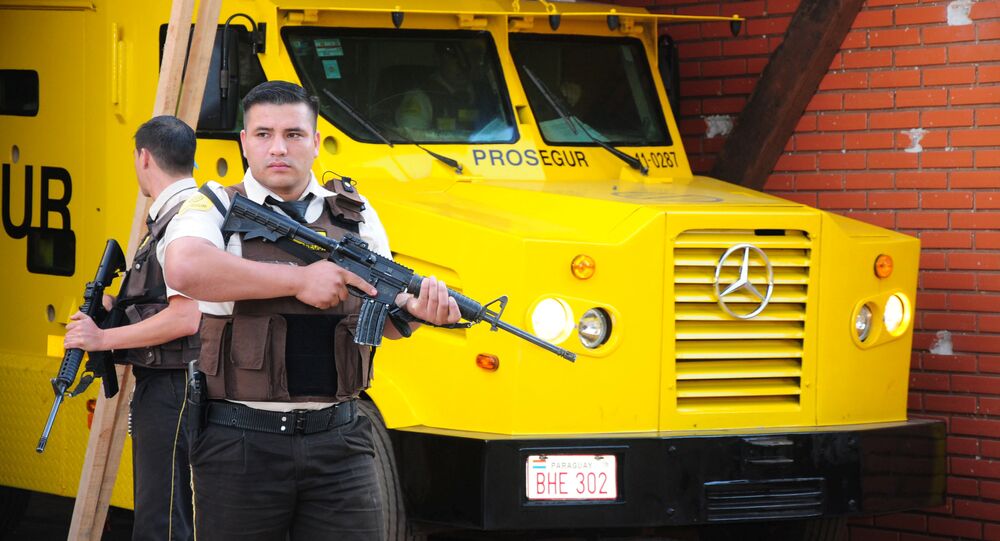 Police in Brazil are hunting for a gang who launched an outrageously bold and violent cross-border heist but questions are also being asked about why they left behind almost US$40 million in the bank vault in Paraguay.

The PCC, who are based in Sao Paulo, are the biggest and most powerful gang in Brazil. They were created in the 1990s in the wake of the Carandiru prison massacre.

Tweet: "In the possession of those detained and killed, they found heavy armaments, ammunition, bulletproof vests, lifejackets, boots."

They are heavily involved in the smuggling and trafficking of cocaine and other drugs and have thousands of members and associates in Sao Paulo — Brazil's biggest city — and across the country.

While re-election has been occupying polit attention, early 2017 has seen flare-up of gang violence along Brazil border. Near-daily killings

The PCC's leader, Fabiano Alves de Souza, known as Paca, is said to have his base in the Paraguayan border city of Pedro Juan Caballero.

But the 24 April raid was led by Diego da Silva, 27, who was believed to be the PCC's third-in-command.

The Brazilians, who were heavily armed, burst into a security depot run by the Spanish security company Prosegur and stole around US$11m from the vault after using explosives to get inside it.

The gang, who had brought anti-aircraft guns with them in case the Paraguayan police or army sent helicopters or planes, set fire to numerous vehicles to mask their escape.

Pictures from Ciudad del Este showed Prosegur's devastated depot and the governor of Alto Parana state, Justo Zacarias, said: "The security firm's premises has been destroyed and the attack caused chaos and terror in the city."

They fled in 19 cars and a hijacked Prosegur armored truck and transferred their booty to waiting boats on the Parana river.

They traveled 30 miles downstream but were intercepted by Brazilian police at Itaipulandia, not far from the world-famous Iguazu Falls, were there was a huge shootout.

Da Silva is understood to have been killed, along with two others, and nine of his men were arrested but the majority of the gang escaped with their ill-gotten gains.

Brazil's Federal Police said 50 PCC men were believed to have been involved in the attack — 30 entered the vault while another 20 confronted the police and covered the escape route.

But mystery surrounds why the gang left such a large amount of money behind in the Prosegur depot. Much of it is thought to have been in guaranis, the Paraguayan currency — a dollar is worth 5,572 guaranis.

"Around US$40m was in the vault. Much of it was in lower-value guaranis, which they left. They may have left (Brazilian) reals too and just taken dollars," said Paraguay-based journalist Laurence Blair.

He said there may have been another safe which they could not get into or it may have simply been that they did not have the time or the space to take away all the loot.

In February 2006, a British gang stole US$68 million (£53m) from a Securitas depot in Kent, loading it into cages and bags and driving off in truck.

© Sputnik / Grigoriy Sisoev
Alarming Statistics Show Brazil Has Higher Homicide Rate Than War-Torn Syria
But they left behind US$197 million (£153m) and the prosecutor Sir John Nutting QC, told their trial: "The only reason why no more than £53m was stolen was because the robbers could not fit any more cages into the lorry."

The Governor of Sao Paulo state, Geraldo Alckmin, has promised to tackle the PCC's control in the region but experts doubt he is capable and point out the gang has tentacles deep inside the police.

An uneasy alliance with the Red Command (Comando Vermelho) collapsed earlier this year and the PCC is regularly involved in shootouts with Rio's two other big gangs, the Third Command and the Amigos do Amigos (Friends of Friends).

Earlier this year armed police stormed a prison compound in Rio Grande do Norte state to separate the PCC and their rivals.

Another Prison Riot in Brazil Kills Four; Death Toll for Past Week at Nearly 100

Drug Gangs Take Back Control of Favelas in Rio