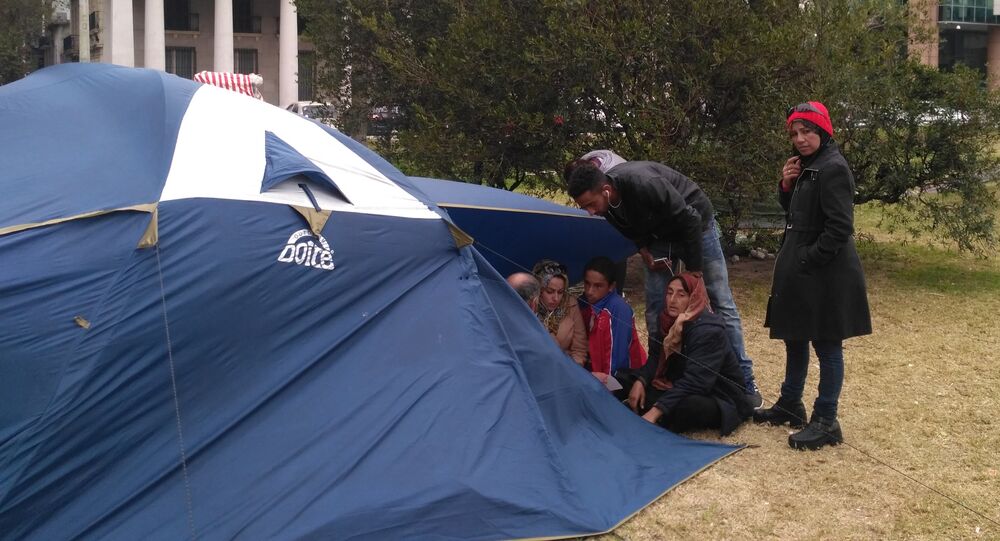 My Nightmare in Uruguay: Refugees Plead With UN to Go Back to Syria

Disillusioned with life in Uruguay, Syrian refugees want to go home but they say they are being prevented by intransigent local officials from the United Nations High Commissioner for Refugees (UNHCR).

© AP Photo / Hassan Ammar
Russian Officer Dies Stopping Terrorists From Entering Syrian Army Garrison
Life in Uruguay has turned out less idyllic than a group of Syrian refugees had hoped, and after just a few weeks they want to return home to Syria.

For the past three weeks, the group of 15 Syrian refugees, including children, has been living in tents in the capital Montevideo. Their campsite is just across the street from some government buildings.

They complain that the international authorities and Uruguayan authorities are not fulfilling their responsibilities towards them, and they want to return to Syrian.

"UNHCR has just washed its hands (of us) and said that we can't return to our country because of war," one of them, Ibrahim Alshebli, told Sputnik.

On April 10, the Syrians sent a request to Uruguayan human rights secretary Nelson Villarreal, demanding to speak to UNHCR representatives about their wish to return to their homeland.

Villarreal organized a press conference for the next day, but eventually decided to wait until UNHCR representative Michelle Alfaro arrived in the country from Buenos Aires.

The Syrians asked Alfaro for permission to go back home, but Alfaro told them their return isn't possible at the moment because of the war in Syria.

"We are asking for permission to return to Syria or any other country, but Syria is a priority, because that's our homeland. I lived well in Lebanon, too," Alshebli added.

© AP Photo / SANA
Reports About Capture of Daesh Leader Baghdadi Not True - Syrian President Assad to Sputnik
While the government continues to deny the Syrians the possibility of returning home, a deputy from the opposition Partido Nacional, Pablo Abdala, is calling for the refugees to leave their campsite in Montevideo, citing a law which prohibits spending the night in public places.

Alshebli said that if the government organize his family's departure from Uruguay, he "won't ask for anything more," and will simply leave the country.

In 2014, Uruguay accepted five Syrian refugee families, 42 people in total. However, the expansion of the resettlement program has been suspended because of problems with integration and finding jobs in the local labor market.

UN Reaches Over 560,000 People in Besieged, Hard-to-Reach Areas in Syria