Mysterious geoglyphs have been discovered deep within the Amazon rainforest. The ancient earthworks, forming circles, diamonds, and other geometric shapes, were revealed by recent deforestation in the Brazilian Amazon.

The glyphs were discovered by Lailson Camelo da Silva, a cattle rancher. He was shocked to find what he called an "Amazon Stonehenge" on recently-deforested land. He informed local archaeologists, who launched a study into the over 450 newly-discovered glyphs.

The team, led by University of São Paulo archaeologist Jennifer Watling, charted the glyphs, reconstructing some 6,000 years of history through the use of plant and soil samples.

Jennifer Watling
Geometric glyphs discovered in the Amazon. The area was recently deforested.

Although Watling's team did not conclude who built the structures and why, they hypothesized that they were most likely used for ritualistic or religious purposes. They did conclude that ancient humans had been altering the rainforest for millennia, and that the newly-discovered earthworks were about 2,000 years old. 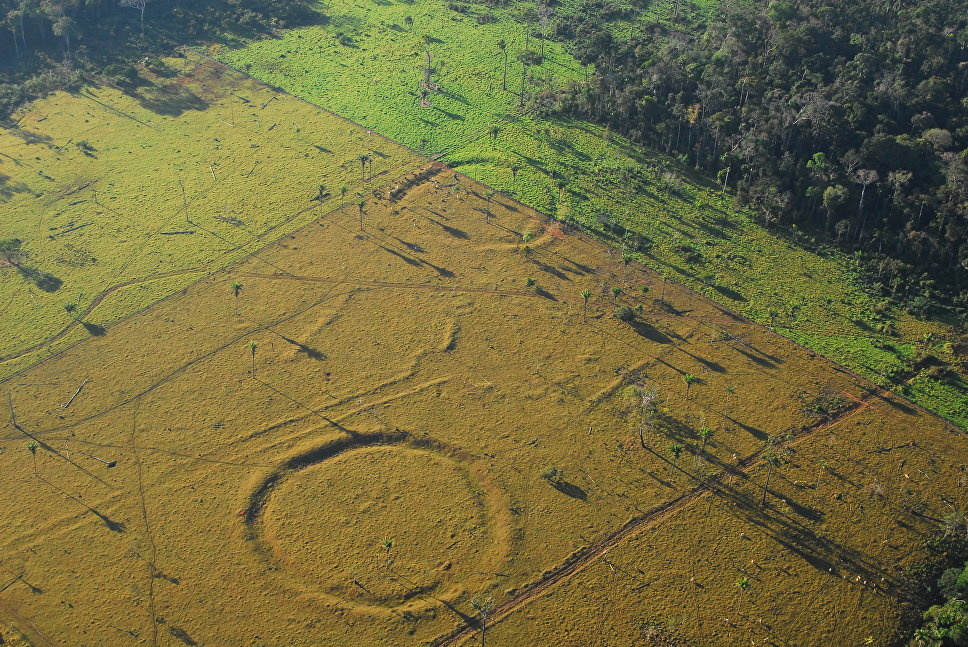 "The fact that these sites lay hidden for centuries beneath mature rainforest really challenges the idea that Amazonian forests are 'pristine ecosystems,'" said Watling. "We immediately wanted to know whether the region was already forested when the geoglyphs were built, and to what extent people impacted the landscape to build these earthworks." 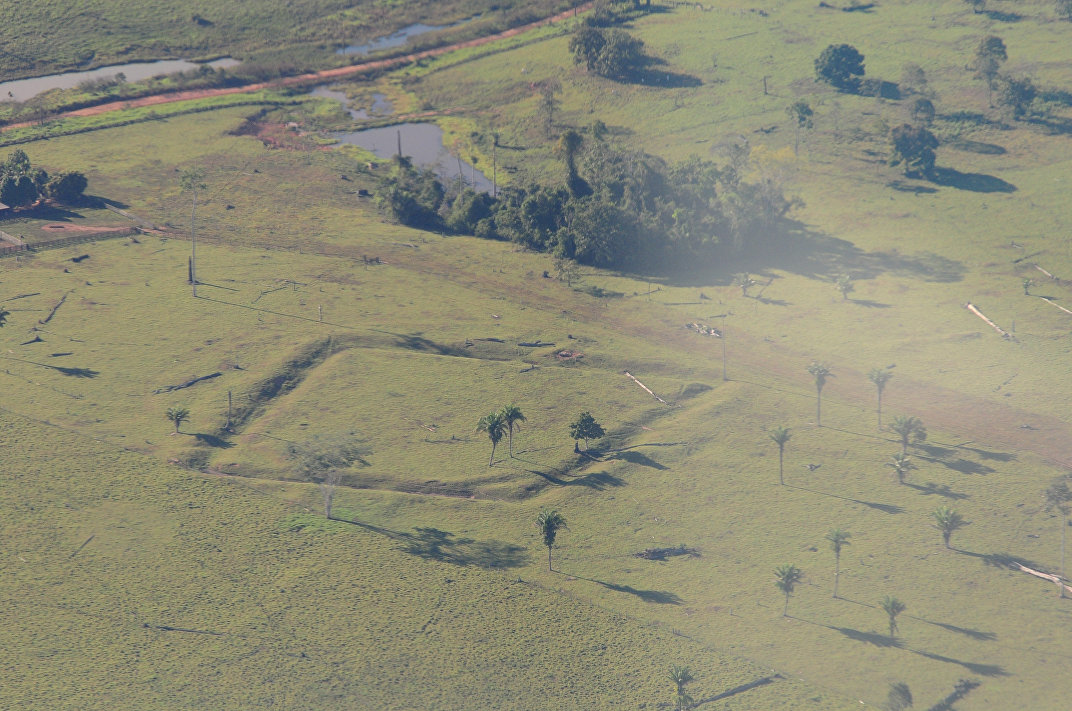 Jennifer Watling
Geometric glyphs discovered in the Amazon. The impressive size of some of the glyphs can be seen in aerial photography.

Acre is Brazil's westernmost state. In 1977, the first geoglyphs from pre-Columbian civilizations were discovered in local deforested lands, countering the assumption that the Amazon rainforest was a pristine wilderness untouched by humans. It actually suggested the opposite, that pre-Columbian people shaped the rainforest to their own ends, and have done so for thousands of years. 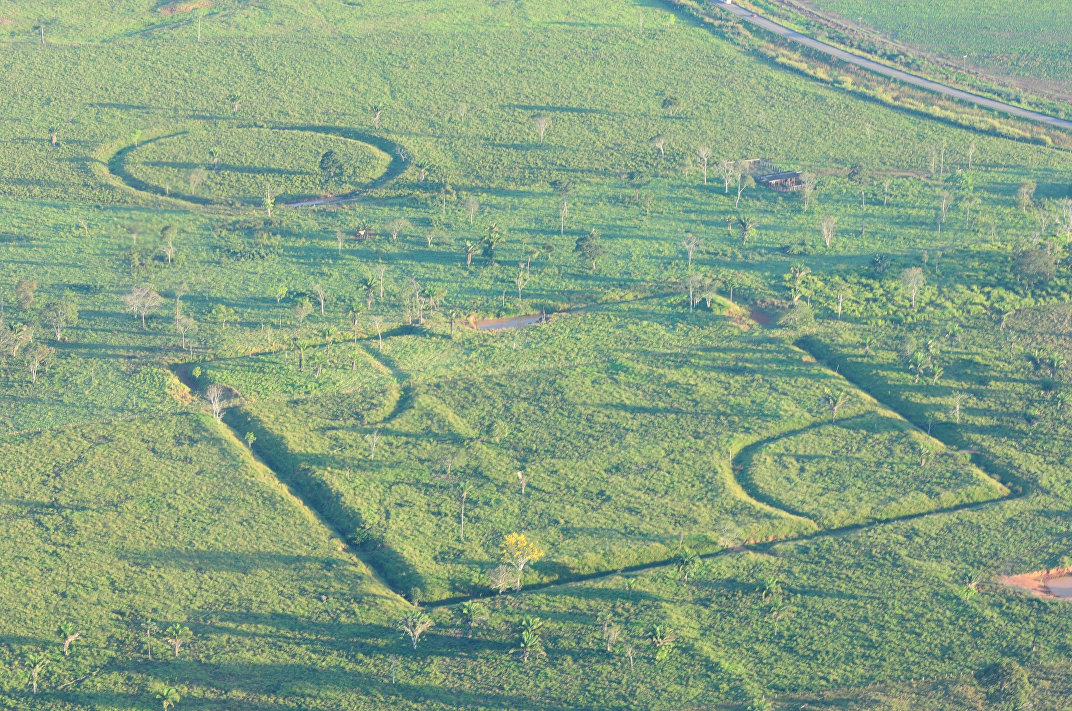 Jennifer Watling
Geometric glyphs discovered in the Amazon. It is unlikely that this particular glyph is an ancient baseball diamond.

The recent discovery of new geoglyphs serves as further evidence of this hypothesis. Watling claimed that the ancient civilization practiced sustainable forestry, replacing cut trees with ones more useful, such as palms.

Jennifer Watling
Geometric glyphs discovered in the Amazon. The glyphs are remarkably large and well-preserved.

"Our evidence that Amazonian forests have been managed by indigenous peoples long before European Contact should not be cited as justification for the destructive, unsustainable land-use practiced today," Watling cautioned. 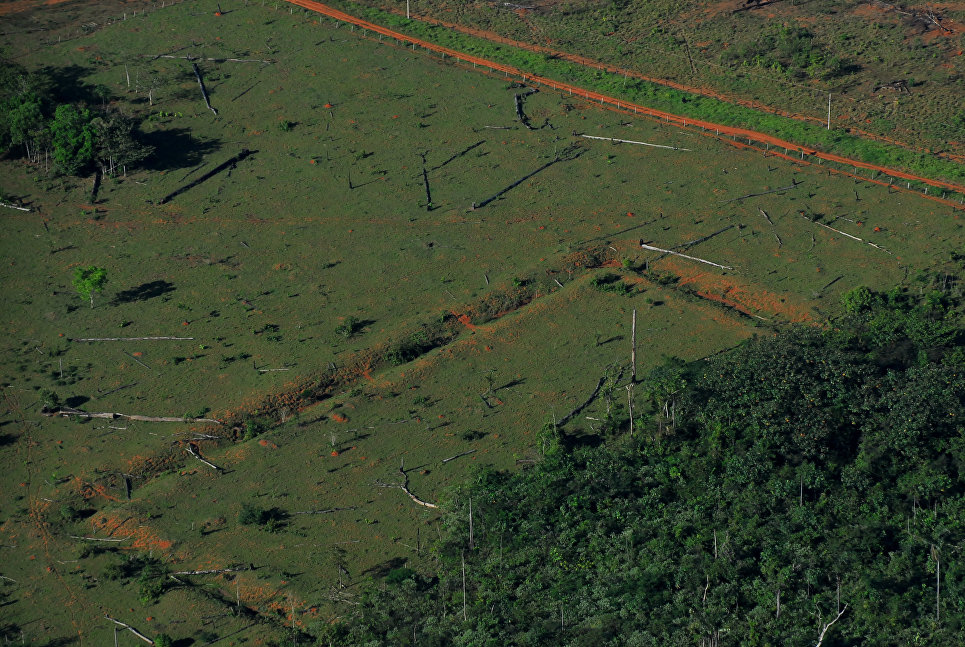 Jennifer Watling
Geometric glyphs discovered in the Amazon. The deforestation only revealed about half of this glyph.

"It should instead serve to highlight the ingenuity of past subsistence regimes that did not lead to forest degradation, and the importance of indigenous knowledge for finding more sustainable land-use alternatives."