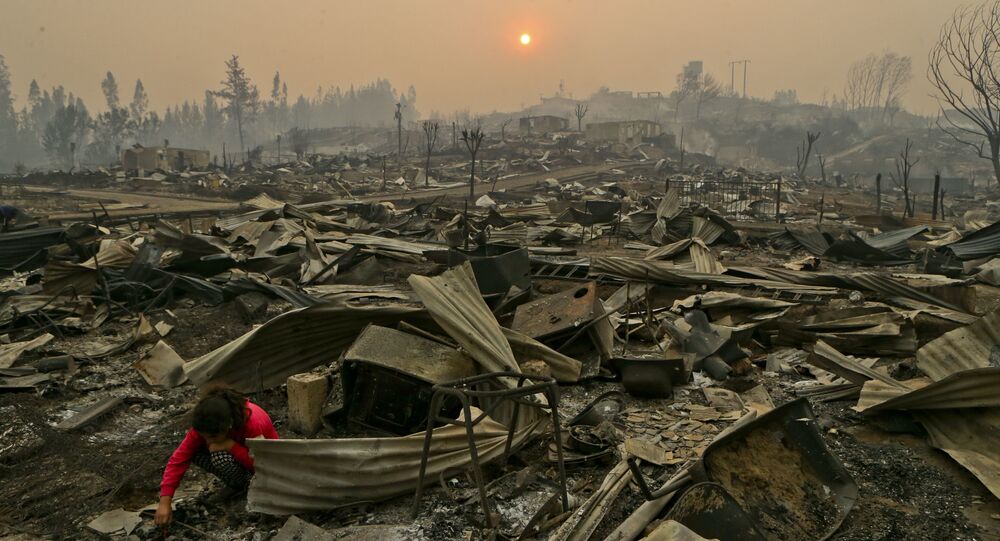 The worst wildfire to strike Chile in modern history has claimed 10 lives since November 2016, officials say. Over 1,000 buildings have been destroyed by the blaze, and some 6,000 Chileans have been displaced.

The ten dead include three residents, two policemen, and five firefighters. According to reports, three of the 10 died battling blazes on Wednesday, January 25. Firefighters took a moment to mourn one of their own who died on Wednesday helping a family evacuate their burning home.

My country is burning and is getting worst, please help us! 🇨🇱😢 #ChileNeedsHelp #PrayForChile pic.twitter.com/Sy3o9CJOF5

​The blaze has ravaged the town of Santa Olga, virtually destroying the settlement. Most of the destroyed buildings were homes, but the local post office and kindergarten were also engulfed.

​The fire is the result of a prolonged drought and record-breaking heat wave, and spread via strong winds. The disaster has destroyed an estimated 680,000 acres (over 1,000 square miles) of forest. Dry vegetation in Chile's verdant central regions burns easily, leading to over 90 uncontained forest fires currently.

A forest fire rages through houses on a hill as authorities declare a red alert for the area, Valparaíso, Chile — Rodrigo Garrido/Reuters pic.twitter.com/8RihlMb4p0

​"This is an extremely serious situation—of horror, a nightmare without an end," said Carlos Valenzuela, mayor of the nearby city Constitución. "Nobody can imagine what happened in Santa Olga. What we have experienced here is literally like Dante's Inferno."

CHILE — People walk amid the remains of burnt down buildings after a forest fire in Santa Olga. By @PVLphoto #AFP pic.twitter.com/Z51AXC4a9C

​Chilean president Michelle Bachelet has declared a state of emergency, calling the fire "the greatest forest disaster" in the history of the South American nation. Thousands of firefighters, hundreds of Chilean troops, and dozens of aircraft have been deployed to mitigate the damage, but the fires have raged for two months and are nowhere near defeated.

​Bachelete, claiming that Chile has "practically exhausted its capacity to fight the blaze,"is asking for international aid. The US responded by sending a Boeing 747-400 Water Bomber, an airborne firefighting aircraft that can carry almost 20,000 gallons of water or fire retardant. Russia sent an Ilyushin-Il-76 super-tanker aircraft with a 13,000-gallon capacity. Canada, Mexico, France, Portugal, and Colombia have all also provided assistance.

​The tireless efforts of Chilean and international firefighters prevented the flames from spreading to Penco, a town of nearly 50,000. But Chile's interior minister Mahmud Aleuy warned that more fires are likely to break out as temperatures and winds remain high while humidity remains low.

© AP Photo / Alejandro Zonez
Firefighters dig trenches in a effort to stop the advancement of a forest fire in Hualañe, a community in Concepcion, Chile.

The exact cause of the fires remains under investigation. Climate change, poor forest management, improper fire safety, and non-indigenous plant life have all been pointed to as potential causes.

At Least Two People Killed, Eight Missing Due to Floods in Chile