Leaked Recording: Pilot of Colombia Plane That Crashed Said He Was Out of Fuel

Leaked audio of the communications between the pilot of LAMIA flight 2933 and air traffic controllers reveals him frantically asserting that he had run out of fuel on the fatal flight.

© REUTERS / Paulo Whitaker/File Photo
Tragic Plane Crash in Colombia Takes Chapecoense Players’ Lives, Its History & Future
At least 71 people were killed in the crash on Monday, including charter members of the Brazilian Chapecoense soccer squad. So far, only six survivors have been found.

In the frantic audio recordings, the pilot is heard repeatedly requesting permission to land due to a "total electric failure" and lack of fuel, before slamming into a mountainside, the Associated Press reports.

The air traffic controller is heard attempting to provide the pilot with instructions, and the pilot stated that they were flying at around 9,000 feet before radio silence. The plane would soon crash into a mountainside only eight miles from the Medellin Airport.

A surviving flight attendant and a nearby pilot who heard the communications had also asserted that this was what they heard in the final moments before the crash.

"I remember I was pulling really hard for them, saying 'Make it, make it, make it, make it,'" Juan Sebastian Upegui, the co-pilot on an Avianca commercial flight who overheard the communications said. "Then it stopped…The controller's voice starts to break up and she sounds really sad. We're in the plane and start to cry." 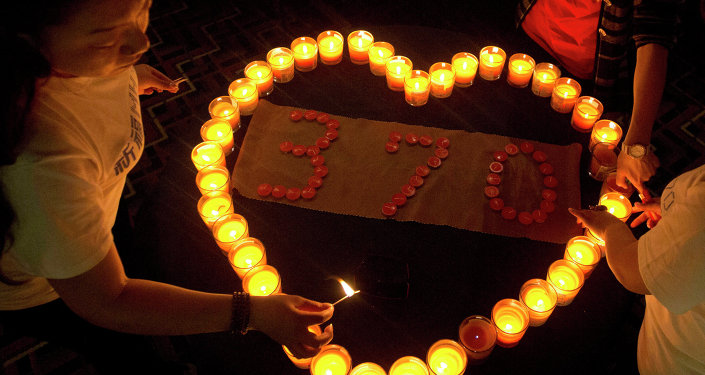 © AP Photo / Ng Han Guan
Sick of Waiting for Answers, MH370 Families Head to Madagascar to Keep Searching
Giving even more clout to this explanation is the fact that the plane did not explode on impact.

“These, along with the lack of an explosion upon impact, point to a rare case of fuel running out as a cause of the crash of the airliner, which experts say was flying at its maximum range,” the AP reported.

"If this is confirmed by the investigators it would be a very painful because it stems from negligence," Alfredo Bocanegra, head of Colombia's aviation agency, told Caracol Radio on Wednesday.

Despite the recording, investigators are not pointing to a singular cause of the crash, and their investigation is expected to take months to complete.

The Bolivian charter company who owned the plane, LaMia previously had it listed on their website that the Avro RJ85 jetliner could fly a maximum of 1,600 nautical miles — slightly less than the distance it intended to travel between Santa Cruz, Bolivia, and Medellin. Their website has since been taken offline.

US Ready to Provide Assistance to Colombia After Plane Crash

Colombian Journalist About Plane Crash: 'Most Likely They'd Run Out of Fuel'

Over 20 Brazilian Journalists Killed in Plane Crash in Colombia