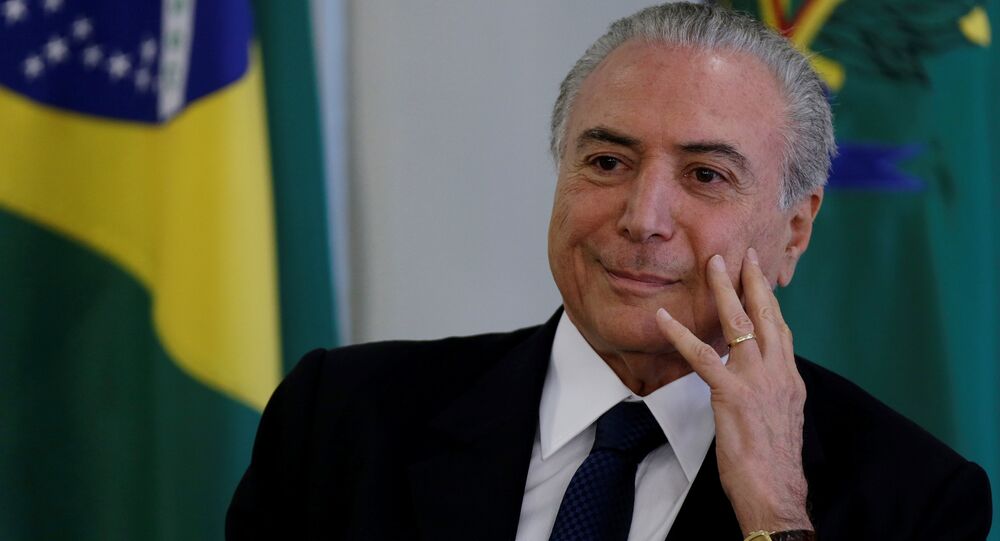 Leftist opponents of Brazilian President Michel Temer are seeking to have him impeached over his involvement in a recent corruption scandal. On Monday, Luiz Araujo, leader of the Socialism and Freedom Party (PSOL), submitted to the lower house of the Brazilian Parliament a request to begin the impeachment process against Temer.

© REUTERS / Ueslei Marcelino
Brazil Minister Resigns Amid Corruption Scandal Involving President Temer
Recently, Former Culture Minister Marcelo Calero, who resigned earlier this month, accused Temer of pressuring him to allow construction of luxury apartments in a historic district of the northeastern city of Salvador. The president has denied the allegations, but admitted speaking to Calero about the matter.

The latest corruption scandal risks undermining country’s efforts to recover from its worst recession since the 1930s.

Temer came to power earlier this year, after former President Dilma Rousseff was impeached over allegations of manipulating the budget, which she has denied. Earlier in November, Rousseff accused Temer of taking a large bribe.

In an interview with Sputnik Brazil, Chico Alencar, a lawmaker from the the Socialism and Freedom Party, commented on the impeachment motion against Michel Temer.

© AFP 2021 / NELSON ALMEIDA
Again and Again: Former Brazilian President Faces New Corruption Charges
According to the lawmaker, the corruption allegations against Temer can be proved by the resignation of Geddel Vieira Lima who held the post of government secretary and was Temer’s ally.

Vieira Lima was the man who invested in the construction of apartments in Salvador. He submitted his resignation after Calero told federal investigators that Temer has pressured him over the construction project.

"But what did the president do? Instead of condemning Geddel, he supported him. For us, it’s clear that this is a crime for which the president should be suspended from office. Temer is responsible for the policy the county is already tired of. This is why we’re trying to initiate impeachment," Alencar said.