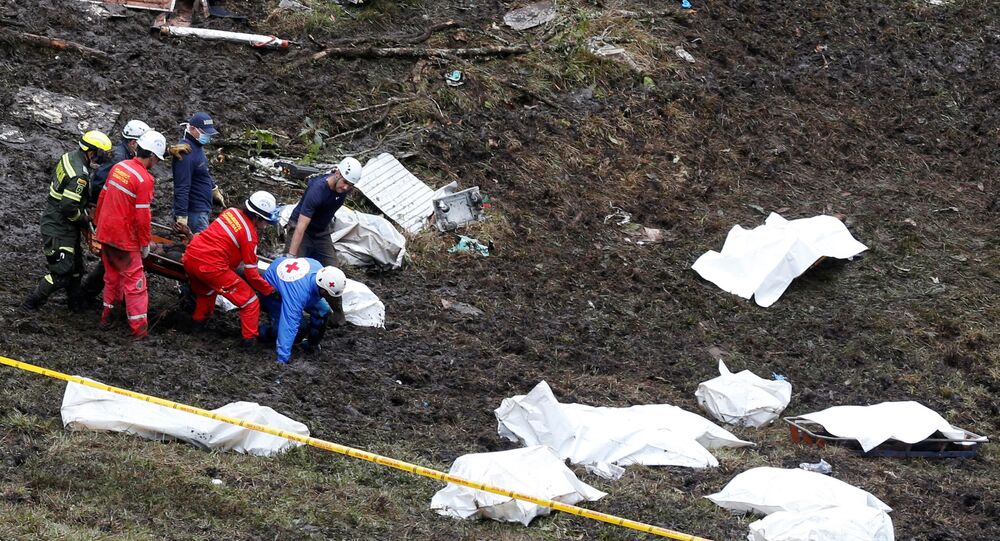 A chartered plane with a Brazilian first division football team crashed on its approach to the Colombian city of Medellin while on its way to the finals of a regional tournament. Sputnik takes a look at the possible reasons behind this civil aviation disaster.

The plane known as Avro RJ85 (Regional Jet 85) was a medium-range passenger aircraft. The crashed airliner made its debut flight in 1999.

There were 387 aircraft of this series that were made. The slightly modified Avro RJ85 can accommodate from 85 to 112 passengers.

The Avro RJ is designed for smaller airports located in the city, so it needs little distance in order to take off and land.

Brazilian aviation safety expert and former civil and military aircraft pilot Milian Heymann spoke to Sputnik Brazil about the possible causes of the crash saying that the RJ-85 is a reliable aircraft for such types of flights over mountainous terrain.

​“What draws attention is the fact that the plane did not burst into flames after the crash. This is a possible sign that there was a small amount of fuel, it was just enough to arrive at the destination. A lack of fuel may explain possible problems with electricity,” Heymann said.

He further said that without the necessary amount of fuel, the four engines aircraft could have stopped, which could have led to a loss of control by the pilot and eventually the crash of the aircraft. He stressed that this is just his personal opinion.

© REUTERS / Fredy Builes
Over 20 Brazilian Journalists Killed in Plane Crash in Colombia
Honored Pilot of the USSR, Chairman of the Civil Aviation Board of Public Transport Supervision, Oleg Smirnov, in conversation with RT said that it was “a good plane, it had been in service for a long time and it has shown to be safe and comfortable for passengers.”

The wreckage of the aircraft, bodies of the passengers and a few survivors were found by Colombian rescue services in mountainous terrain.

It is possible that the pilot was looking for a landing site. “If the pilot knows that he doesn’t have enough fuel to fly till the landing strip he starts looking for more or less flat area for emergency landing,” distinguished test pilot Magomed Tolboev told RT.

According to him if a pilot flies through mountains, he marks some plateaus on the map where in the case of emergency, the plane can land.

Fligtradar24 portal reported that on approaching the Medellin airport the plane started to fly in circles. This is usually done by the pilots in order to get rid of excess fuel so that the plane doesn’t explode on landing.

​However, Tolboev noted that when the pilot does that, he loses a lot of fuel and it is very important to remember not to overdo it as the fuel might finish before the plane manages to actually land.

So far, the voice recordings of the pilot with the dispatcher have not yet been made available so no conclusions can be made based on the technical characteristics of the aircraft. That leads to the biggest question.

According to the documentation, the practical range of Avro RJ85 with 85 people onboard is 2963 km. However, the distance between the point of departure of the plane and destination in Medellin was 2975 km.

“The plane was flying for more than four hours. It has four jet engines with a high consumption of kerosene and this distance in fact was the limit, as it usually flies for shorter distances,” Oleg Smirnov said.

The long distance of the flight and possible required maneuvers due to poor weather could have led to the plane running out of fuel, according to Smirnov.

The expert added that the fact that there are survivors from the plane indicates that it did not completely breakdown and did not catch fire. This gives hope that the flight recorders will be intact.

Their decoding will give a better picture of what actually went wrong. According to the expert it is possible that the decryption of the data will take place very quickly.

Up to 27 Possible Fatalities in Colombia Plane Crash Carrying 81