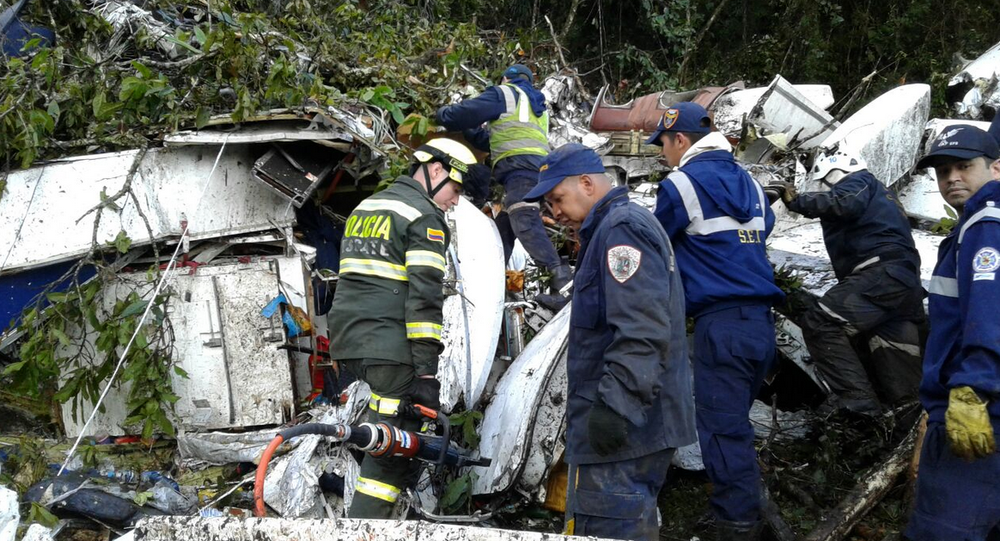 Marco Antonio Cumsille, an executive producer of Chilean sports channel, Deportes 13 spoke to Sputnik Mundo in an interview about the tragic plane crash in Colombia.

© REUTERS / Jorge Silva
Deadly Colombia Plane Crash 'Very Sad Day for Football' - FIFA President
“The death of most of the Chapecoense football players is tragic news for several reasons. This club is not only a part of the first division in Brazil; it was able to reach the finals of the South American Cup,” Cumsille said.

He further said that unfortunately, such incidents have taken place in the region before. In 1987, a plane crashed a few kilometers from Lima, with members of the Peruvian Alianza Lima football team on board. Everyone was killed.

Cumsille added that a “similar disaster occurred in Chile in the middle of the last century.”

Coming back to death of Chapecoense club players, the producer said that it is an occasion for mourning throughout the Latin America.

On November 30, the first match [of the two] of the South American Cup final between Chapecoense and the Colombian club Atlético Nacional was due to take place.

“Given these tragic circumstances, it is difficult to say how the winner of the Cup will be determined now,” Cumsille told Sputnik Mundo.

© Photo : Twitter/ MiOriente
At Least 13 Survivors in Colombia Plane Crash - Emergency Team PMU
However, he said that there is a similar historical precedent. At the end of 2001 in Argentina, in connection with the protests, the government of President Fernando de la Rua fell so it was impossible to hold the final match of the South American Cup, in which Argentines had to play against Brazilians.

The game was held but in March of the following year.

According to Cumsille, “I think in this case the game will also have to be rescheduled. Although for obvious reasons the two situations are not entirely identical.”

Talking about the plane crash and the airline itself, the executive producer said that he had never heard any negative reviews about the Bolivian airline Lamia, whose plane met its tragic end.

“The airline often organized charter flights for the football team and was known in the sports world across whole of Latin America,” he said.

According to the executive producer, the aircraft and airlines in Latin America today are reliable and quite safe. There are virtually no air crashes and flying conditions are also quite good.

“The main challenge for the pilots in Latin America is landing, as airports are often located in the mountains and one must have the skill to pilot in such circumstances,” Cumsille concluded.

A plane carrying 81 people, including Brazilian football team, crashed on its approach to the city of Medellin in Colombia. The chartered aircraft, flying from Brazil via Bolivia, was carrying members of the Chapecoense team.