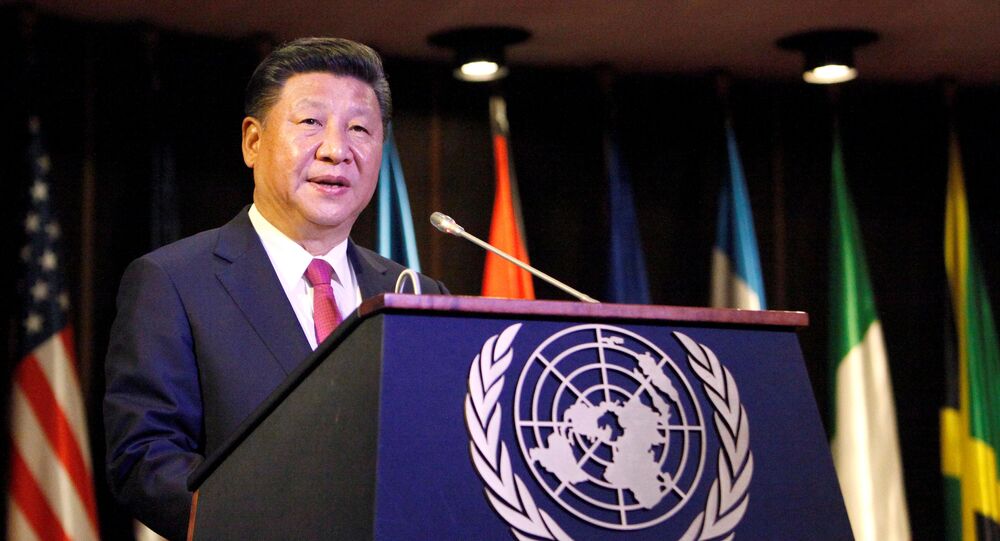 China Poised to Challenge US Supremacy in Latin America

Chinese President Xi Jinping has wrapped up his tour of Latin America, visiting Ecuador, Peru and Chile, and attending the 24th Asia-Pacific Economic Cooperation meeting in Lima, Peru. Speaking to Sputnik, Latin America expert Alexander Kharlamenko warned that in the next few years, US-Chinese rivalry in Latin America is guaranteed to heat up.

© Wikipedia / victor san martin
China, Chile Seek 'Comprehensive Strategic Partnership'
On Wednesday, speaking to reporters after meeting with Chilean President Michelle Bachelet, President Xi stressed that Beijing was prepared to strengthen dialogue and cooperation with the countries of the Pacific Alliance, a Latin American trade bloc which includes the Pacific Ocean-facing countries of Chile, Colombia, Mexico and Peru. Xi also called for the creation of an Asia-Pacific free trade zone.

Xi and Bachelet agreed to start negotiations aimed at expanding Chinese-Chilean bilateral trade. Similar commitments were agreed with the leaders of Peru and Ecuador.

Pointing to the several dozen bilateral agreements signed between China and South American leaders in the course of Xi's trip, observers have said that the Chinese leader's visit to the region was a success. Its main accomplishment was the agreement to create an Asia-Pacific free trade zone. Chile, Peru and Mexico have all signed on to the idea.

Experts also pointed out that US President-elect Donald Trump's hostility to the Trans-Pacific Partnership (TPP), a trade deal between twelve nations of the Pacific Rim, including Chile, Mexico and Peru and the major economic powers in Asia, but not China, has also affected the Pacific Alliance and its plans to increase trade with the rapidly growing Asia-Pacific region.

© REUTERS / Guadalupe Pardo
Will China Take Over Where the Asia-Pacific TPP Fell Short?
Speaking to Sputnik, Alexander Kharlamenko, director of the Moscow-based Latin America Research Institute, explained that China will certainly try to fill the vacuum that will form if Trump moves forward with his plans to kill the TPP.

"These countries are looking for an alternative to the US in the dynamically-developing Asia-Pacific region and, first and foremost, at the new leading force – China," the political scientist noted. "This, I think, is the primary reason that Xi was able to activate the process to create a free trade area in the Asia-Pacific region," he added.

"It's natural that all these countries are looking for ways to somehow confront the economic challenges facing them and to stabilize the situation. On the other hand, China is searching for new markets for export and investment. Major investment agreements have been signed, but under circumstances which have changed. Previously, these Latin American countries had counted on new markets and investments in the context of the TPP. Certain forces were attempting to [use] this project against China. The Chinese, as they tend to do, obviously sought to outmaneuver these forces and to integrate into this architecture. Now, everything must be rebuilt on the go. This, I believe, explains Xi Jinping's mission, and its results."

Kharlamenko stressed that a "sharp economic and political rivalry" for Latin America is virtually guaranteed to form between China and the United States in the near future. "It had been gaining momentum earlier, as it has in several other regions in the world, and now, it's obvious that it will intensify," the political scientist noted.

© REUTERS / Jonathan Ernst
Trump's World Order: How US Foreign Policy Could Change Under New President
Accordingly, he added, Beijing's ability to prove that it can challenge US hegemony will help determine its status as a great power politically, and not just economically.

"It's one thing when China frenziedly expanded economically and in terms of trade in North America, and in this context was able to advance its influence in other regions. Washington found this difficult to resist, fighting it with one hand, and shaking hands with Beijing with the other."

But President-elect Trump's election rhetoric took an unprecedentedly tough stance on China. "Specifically," Kharlamenko recalled, "he announced the possible increase in customs duties on Chinese exports to the United States. And this creates a much more serious situation. In the near future we will see the political manifestation of this worsening of relations, and this in turn will impact China's relations with Latin America."

As far as President Xi's trip is concerned, Kharlamenko pointed out that the Chinese leader was able to push forward with agreements on cooperation with these Latin American countries in spite of the ambiguous political situation facing all three countries.

Ecuador, for instance, faces elections in February, whose outcome is difficult to predict, given the background of sharp political changes across the continent, and the country's strong dependence on outside factors when it comes to its economy.

Nevertheless, Kharlamenko stressed that so far, the serious political risks associated with orienting their economies toward China has not affected the dynamic growth in trade and investment cooperation with these countries. On the contrary, Xi's visit gave a political impetus for Chile to join the China-led Asian Infrastructure Investment Bank.

Chile Wants to Join AIIB as Soon as Possible – President