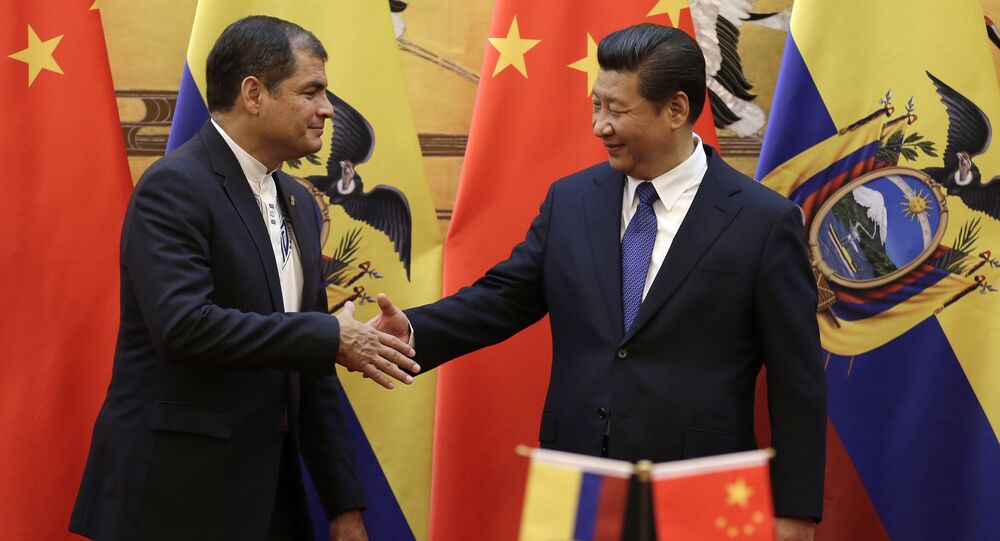 As the new US President promises a more distant relationship with Washington's Latin American neighbors, China is keep to develop its economic links with the region, Petr Yakovlev of the Russian Academy of Sciences' Institute of Latin America told Sputnik.

© REUTERS / Jonathan Ernst
Will Tariff Wall Against China Make America Great Again?
This week's visit is Xi Jinping's third to Latin America in the three years since he took office in March 2013. From November 17-23 the President will visit Ecuador, Peru and Chile, where he is expected to sign a range of agreements on infrastructure and economic development with the governments there.

Despite recent global economic uncertainty, China has an ambitious goal to increase its volume of trade with the Latin American continent to $500 billion, and invest $250 billion there. China is already the biggest trading partner of Peru and Chile, and the third biggest for Ecuador.

Petr Yakovlev, head of the Center for Iberian Studies at the Russian Academy of Sciences' Institute of Latin America, told Sputnik that Beijing is hoping to capitalize on less US engagement with the region under incoming President Trump.

"If before, Beijing was forced from time to time to look to Washington and check its actions in the region with the Americans, now there is a clear aspiration to act independently," Yakovlev said.

"China is trying to fill a certain vacuum created by the new US politics of protectionism and tense relations with some Latin American countries, especially Mexico. Here China is a waiting in standby mode and wants to occupy those niches that might be forming in Latin America."

Beijing is planning a major change in its economic relationship with Latin America, from supplying industrial consumer goods, to providing the industrial equipment necessary for new enterprises. In connection with this, China is making large investments in infrastructure projects, considered to be the driver of economic growth.

The project is worth over $2 billion, and was financed and managed by the Chinese company. In all, China has helped to build or reconstruct eight hydroelectric power stations and ten highways in Ecuador, and made more than $10 billion of loans and investments.

While China is seeking more engagement with the region, US President-elect Donald Trump has declared he wants to take a more isolationist and protectionism path. For example, he has blasted the Trans-Pacific Partnership (TPP) free trade deal, which was championed by Barack Obama as a way of deepening US trade links with 11 other countries including Mexico, Chile and Peru.

"Ecuador, Peru and Chile are the Pacific Ocean facade of Latin America, and there is close economic competition there between the US and China. In these circumstances, President-elect Trump's intention to torpedo the TTP agreement plays into China's hands. If Trump stops the ratification of this agreement, then Chinese projects to create new, alternative integratory mechanisms in the Asia-Pacific region will receive new impetus," Yakovlev said.

"There is already a lot more attention being paid to (Chinese projects), in Peru and other Latin American countries. Officials are already saying that they are ready to take part in these projects, which are essentially under Chinese leadership. Pulling the Pacific Ocean countries of Latin America to these projects, which China is developing across the entire Asia-Pacific region, is another objective of Xi Jinping's mission."