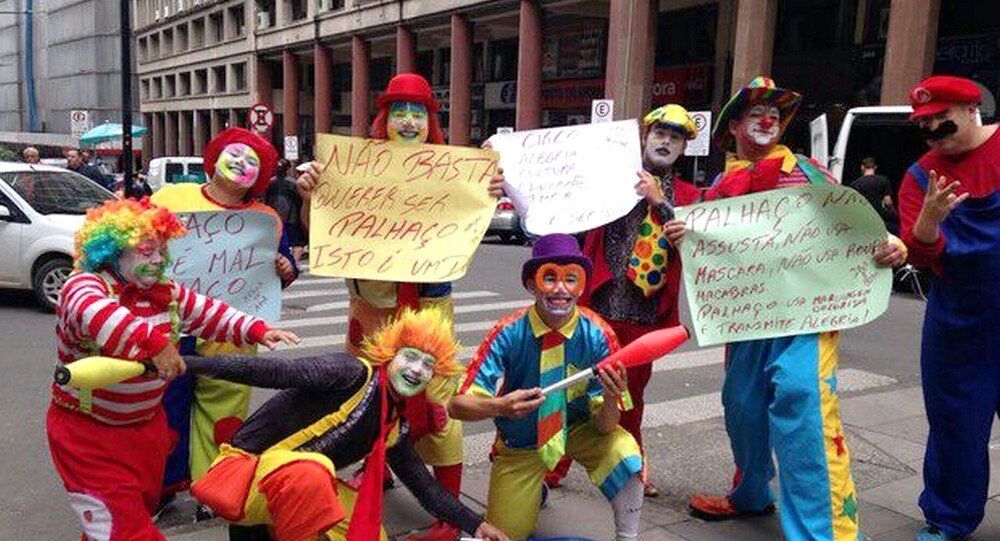 Brazil's "Association of Good Clowns" is holding a street demonstration to stop their professional reputation being tarnished by recent "creepy clown" attacks.

© Flickr / neal1973
Creepy Clown Attacks Car in Russia, Driver's Reaction is Far from Panic (VIDEO)
A group of "good" clowns in Brazil are staging a protest in opposition to a recent spate of attacks by the nefarious evil clowns which are besmirching the reputation of their profession, Sputnik Brasil reported.

In August 2016 there were reports of "creepy clowns" in South Carolina, a southeastern US state. Police there received reports of clowns trying to entice children into the woods, standing in their gardens, and knocking on doors.

Since then, there have been reports of creepy clowns accosting people across the US and other parts of the Western world. In Germany last week, there were several reported "horror clown" attacks, including clowns wielding chainsaws and baseball bats.

The problem has also spread to Brazil, where local clowns in the state of Rio Grande do Sul held a demonstration on Friday in the state capital Porto Alegre, in the hope of saving the reputation of professional clowns.

Divulgação Equipe Ariel Brandão/Palhaço Margarina
Clowns participating in the protest in the center of Porto Alegre
"This trend has a really unpleasant impact on us, as professionals of this art. I and my colleagues in this state appear at various events, for example at birthday celebrations, and when we go out on the street or arrive at these celebrations people start looking at us strangely," Ariel Brandao, who performs as "Sausage Clown," told Sputnik Brasil.

"Straightaway they start saying, after all this news from across the world and in Brazil, because of this trend from the US, 'look – they are killer clowns'."

"This has started to affect me. Customers are canceling work, replacing clowns with something else. This is one of the oldest professions in the world. Our goal is to bring joy to everybody, from babies to 100-year-olds," Brandao said.

Divulgação Equipe/ Palhaço Margarina
Ariel Brandão, the "Sausage Clown" at the protest
Brandao is a member of the "Association of Good Clowns of the state of Rio Grande do Sul," and one of the organizers of the protest. He said the aim of the demonstration is to show that professional clowns actually don't have anything to do with "creepy clowns."

"We want people to see us and say, 'look, what a great clown, he's a professional.' We don't want people to compare us to people who put on our clothes, and masks, not even make-up, who carry knives and axes and other things. They are using our likeness to spoil our image. It's like me putting on the clothes of any other profession and attacking people."

© Photo : Sarah Hickson
Rising Coulrophobia Not Cool for Real Clowns as Global Hysteria Continues
"Children suffer most of all. Whether we like it or not, children receive the idea that clowns are not good, but bad. Our work should be recognized as something good, something fun and educational like a circus, something cultural. The clown is all those things," Brandao said.

"We will continue to fight, and we have planned another clown show on Monday. We will continue until it becomes clear to everybody that we are not to blame for this new fashion, for what they are doing. We just want that recognition. We are real clowns, real professionals in the art of bringing joy to people."

US Halloween Face-Control: Clown Costumes Banned in Parts of Mississippi

No Joy For the Jesters: ‘Clown Lives Matter’ March Canceled Amid Threats