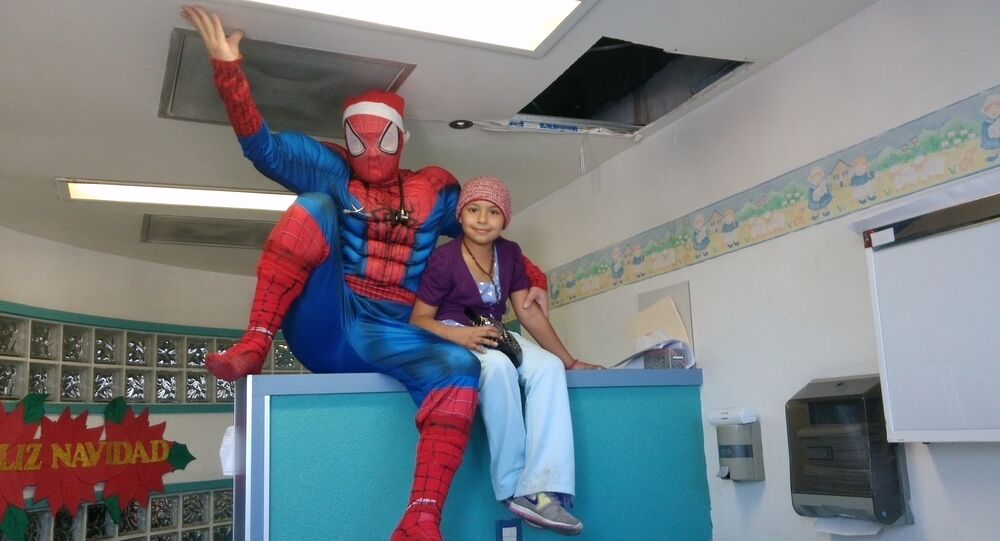 One Mexican doctor has taken to treating small children who are sick with leukemia dressed as Batman, Iron Man and other superheroes. His patients not only feel happier, but also seem to be recovering faster.

The unusual doctor,Sergio Gallegos Castorena, is one of a small number of people who was able to survive testicular tumor. At the age of 17, Sergio was told that he would die. His parents decided to take him to America to find a special treatment that would save the boy’s life. And they succeeded.

After intensive chemotherapy, he was cured, but it was not just medicine that saved Sergio’s life.

“Clowns came to visit me in the hospital. They brought joy and good humor. They helped me to forget my sufferings from chemotherapy's strong side effects,” Doctor Gallegos, an oncologist and pediatrician at the Guadalajara Hospital, told Sputnik Spain.

In 1989, Sergio and his family returned to Mexico and Sergio’s life has considerably changed.

“I got a second chance. I decided to be happy every day and bring joy to people around me. So I went into medicine to treat children ill with cancer as not everyone gets an opportunity to receive American therapy,” Sergio told Sputnik Spain.

Starting in1989, he attended university courses five day a week, while during weekends, Sergio dressed up as a clown and visited sick children at the department of pediatrics in a public hospital.

On Christmas day in 2007, Sergio decided to dress up as a Santa Claus and treat patients in this unusual outfit.

So the doctor decided to dress up as different characters each holiday for his small and young patients.

According to Sergio, the treatment of children with leukemia can last up to three years. This kind of illness reflects on the kid’s whole family as well.

“Do not think that the only one who suffers is the child. The method that I practice allows the whole family to get distracted from the real tragedy. Parents see that their kid is happy and that means a lot,” explained the doctor.

Even though Dr. Gallegos’ therapy has no medical grounds, his patients’ health improves dramatically.

“Since my first day in 2007, I cured 34 percent of patients from lymphocytic leukemia. Today, the number has increased to 85 percent. In fact, it's not just costumes that do the job. Behind all the fun, there is a lot of hard work,” Sergio told Sputnik Spain.

“A doctor can save a child’s life but if he is dressed up as Batman, in the eyes of a child he has superpowers,” concluded Sergio.