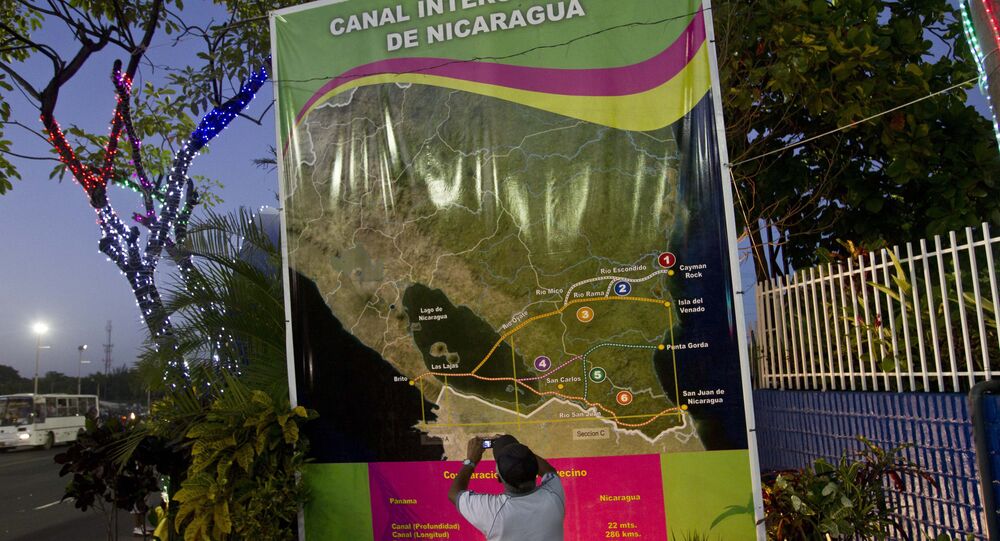 Iran's offer to help Nicaragua build a bigger, better rival to the Panama Canal is a political proposal intended to diminish US influence in the region, economic analyst Houshyar Rostami told Sputnik Persian.

"The people of Iran and Nicaragua are known in the world for their revolutions and resistance against pressure from outside," Zarif said, IRNA reported.

"I hope that Tehran and Managua will be able to enhance their economic relations in addition to their diplomatic ties."

Zarif talked about the construction of the Nicaraguan Grand Interoceanic Canal, a project to build a waterway linking the Pacific and Atlantic Oceans.

"Cooperation between Iran and Nicaragua can include collaboration in the construction of the [Grand] Interoceanic Canal [as well as] agriculture, energy production, petrochemistry, banking, lending, transportation, food and pharmaceutical industries, and science and technology," he added, Press TV reported.

"Even Chinese companies wouldn't be able to master this project in isolation, without the support of the Chinese government. It is really necessary to have an international consortium of a few large companies from different countries. However, for political reasons the initial phase has been entrusted to a Chinese company."

Rostami explained that Tehran is interested in seeing China, which has offered to finance the project, gain a foothold in the region and provide a counterweight to the US, which has military control over the nearby Panama Canal.

Chinese industrialist Wang Jing has agreed with the Nicaraguan government to finance the canal. Russia also supports the project in principle, and earlier this year agreed to supply $80 million of defense equipment to Nicaragua. The country ordered 50 modernized T-72B1 tanks, 20 of which were delivered earlier this year.

Rostami said that Zarif's comments in Latin America received a lot of attention back home, where the public criticized Zarif for devoting so much attention to Nicaragua.

© REUTERS / Alberto Solis
New Wider, Deeper Panama Canal Opens, Could Face Competition from Nicaragua
"Mr Zarif's announcement during his trip to Latin America was the subject of much discussion and criticism. In the main, he was criticized because Nicaragua is a peripheral country for Iran, it is not one of those countries with which Iran needs to strengthen its economic partnership."

"You can't argue with that. However, let's not forget about the political interests which are pushing Iran to strengthen its influence in these kinds of small, but strategically attractive countries, as a counterweight to the US," Rostami explained.

At 270km long, Nicaragua's proposed canal will be three times longer, as well as deeper and wider, than the famous Panama Canal, which re-opened earlier this year after a reconstruction project to expand its capacity to 600 million tons of cargo per year.

The canal was completed by the US in 1914 after other, failed European efforts to link the two oceans. The US handed over control of the canal to Panama in 1999, but retains the right to use military force to keep the canal open to traffic.