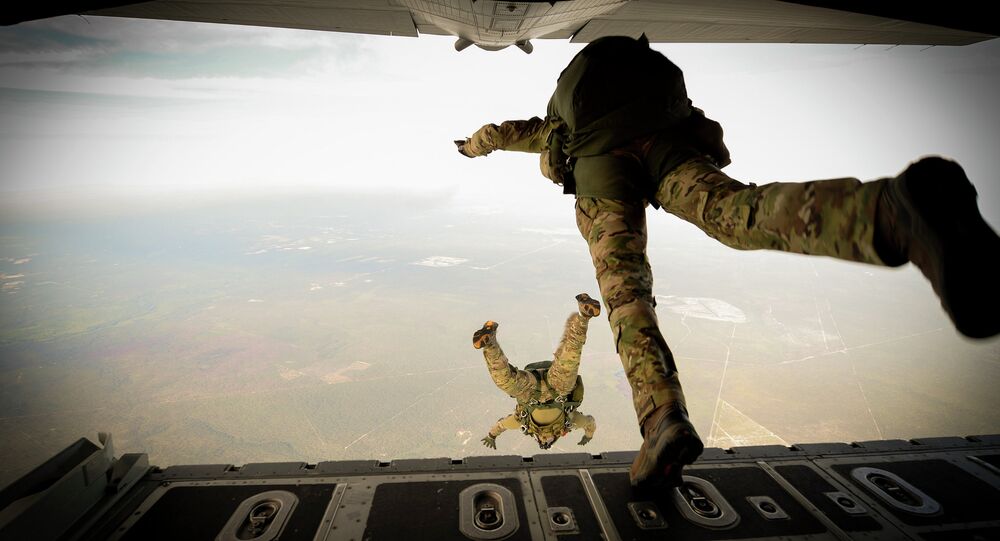 The United States Special Operations military group, specializing in unconventional military missions largely aimed at achieving secret political objectives, has seen an unprecedented increase in Latin America, despite that official US military aid to the region has been on the decline.

© Photo : U.S. Air Force
US Trained Militants That Formed the 'Core of Daesh'
The number of missions carried out by Special Operations forces, including the Green Berets, the Navy SEALs, and the Army Rangers, tripled in Central America between 2007 and 2014, a Tuesday report by the advocacy group Washington Office on Latin America (WOLA) revealed.

WOLA analyzed a trove of US State Department papers on the issue obtained through a Freedom of Information Act request.

WOLA’s Sarah Kinosian and Adam Isacson stated that most of those missions were carried out in the framework of Joint Combined Exchange Training (JCET), a program purportedly to train American troops to operate in specific countries.

During JCET training, US forces in Latin America held joint military drills with local forces, and taught combat skills, intelligence gathering and riot control techniques, the documents state. At the same time Americans familiarized themselves with the countries they worked in “with a minimal footprint," learning local languages, culture and terrain.

"With civil affairs and psychological operations among their chief missions, their purpose is as political as it is military," the report stated. "[JCET] activities often enhance US influence in host countries."

© Photo : Youtube / CATV NEWS
Made in America: State Dept. Launches $3Mln Manhunt For Daesh Leader Trained in US
In 2007 12 JCETs trained 560 foreign troops. By 2014, some 36 JCETs were training about 2,300 foreign troops. At the same time, Kinosian and Isacson said, “overall military aid to the region was decreasing."

The majority of US training missions fell within the so-called Northern Triangle countries of Latin America, including Guatemala, Honduras, and El Salvador.

Honduras had the largest number, with 21 registered training events. According to Kinosian and Isacson, most took place between 2011-2014, a period when "when serious allegations levied against Honduran security forces—murder, torture, rape and extortion—went uninvestigated and unpunished."

"Over the past eight years, nearly 4,000 US Special Forces personnel have trained nearly 13,000 Latin American security force personnel at a cost of $73 million," Kinosian and Isacson said.

© AP Photo / Militant website via AP
Sputnik Exclusive: Iraqi Forces Bust Secret Daesh Training Camp (VIDEO)
The unprecedented growth of US Special Operations missions was acknowledged by its commander, Army General Joe Votel, who made a speech upon his assignment to the position in 2014.

"I believe over the past several years, without even knowing it, we have been, and we are in, the golden age of special operations."

The US Special Forces conducted 135 missions in 2015, many of them secret. The annual training budget has reached $17 billion.

Six Years Later: Is Iraq Free From US Campaign of Endless War?