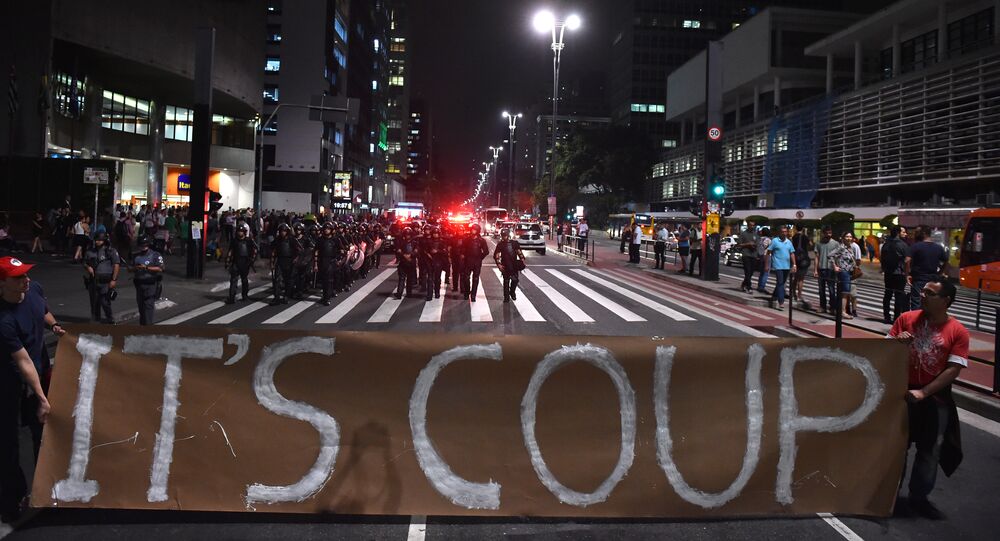 More than half of Brazilian Senators spoke in favor of President Dilma Rousseff’s impeachment on Wednesday with 61 Senators supporting the move and 10 opposing it. Vice President Michel Temer was confirmed as the country’s new President and will hold the post for the remaining two years and four months of Rousseff’s term.

© AFP 2020
Anti-Impeachment Demonstrators Clash With Police in Brazil’s Sao Paulo
“This is a sad day in Brazilian history. I expect the new government to continue its attempts to criminalize our public movements and crack down on dissent. This is already happening now with police violently breaking up a pro-Dilma rally in São Paulo earlier this week,” Erik Bouzan, the leader of the Workers Party’s youth wing, told Sputnik.

Louiz Araújo, President of the Party of Socialism and Freedom (Psol), warned about the dire consequences Dilma Rousseff’s ouster could have for Brazilians.

“First, this is a blow to our fragile democracy, which is largely formal and dependent on economic interests. Secondly, this means the end of a left government that hoped to govern by reconciling irreconcilable interests. And thirdly, our elite will use this to get rid of the hard-won civil rights enshrined in our 1988 Constitution,” Louiz Araújo said in an interview with Sputnik.

When asked about the chances of the Supreme Court revoking the Senate’s decision to  impeach Rousseff, Cláudio Pinho, a law professor in Brasilia, said he doubted it.

“Save for just a few members of the Supreme Court, the prevailing tendency is to keep the Senators’ decision in place,” he said.

© AFP 2020 / EVARISTO SA
Michel Temer Sworn In as Brazil's President After Rousseff Impeachment
Meanwhile, Dilma Rousseff’s leftist Latin American allies have lambasted the Brazilian Senators’ verdict. Bolivia and Ecuador said they were withdrawing their ambassadors and the Cuban Foreign Ministry condemned the move as a “parliamentary-judicial coup” against Rousseff.

In Washington, State Department spokesman John Kirby said that the United States would continue its strong bilateral relations with Brazil.

"We’ve seen reports that the Brazilian Senate in accordance with Brazil’s constitutional framework has voted to remove President Rousseff from office," Kirby said. "We’re confident that we will continue the strong bilateral relationship that exists between our two countries."

In a statement issued on Wednesday, UN Secretary General Ban Ki-moon extended his “best wishes to President Temer as he begins his tenure.”
“[I] trust that that under President Temer's leadership, Brazil and the United Nations will continue their traditional close partnership," Mr. Ban wrote.

Brazil’s New President: World Must See Country as Having Stability