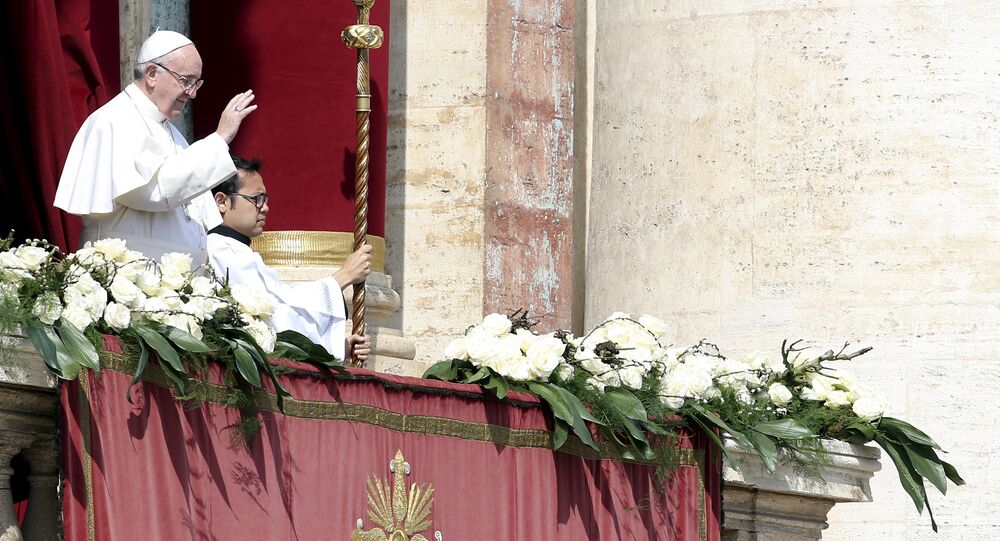 The popularity of Jorge Mario Bergoglio, now known of course as Pope Francis, or the ‘Pope from Argentina,’ has led Buenos Aires’ authorities run a free city tour, looking at the early life of the religious leader

“The tour was first organized two months after Jorge Mario Bergoglio was elected as the Bishop of Rome. His Eminence is aware of its existence. We managed to bring in a few of his friends and comrades from school to get to know more about his previous life,” Soraya Chaina, representative of Ministry of Tourism, told Sputnik.

© AFP 2020 / FILIPPO MONTEFORTE
Walls in Hearts: Pope Francis Urges Europe to Overcome Fear, Aggression
The tour begins and in the San José de Flores Basilica, in which the Bergoglio family prayed on Sunday Mass. At this basilica where Bergoglio, at the age of 17, decided to devote his life to the Catholic Church.

During the excursion it is possible to visit the  Monserrat district, where Bergoglio lived as an archbishop, and the Flores district, where he spent his childhood and where he began his spiritual activities. The tour also includes a visit to the Almagro district, where his favorite football club San Lorenzo was founded.

“I found district Flores beautiful and calming. Locals seem to be proud of Bergoglio. He was a beloved man even before he became the Bishop of Rome. Indeed, it is wonderful to see the ordinary man’s life before he became great,” Florencia Chiribao, 31-year-old Uruguayan architect, told Sputnik.

Residents of the area are so fond of Francis that they call him the "Pope from Flores."

“We are proud that every month for 20 years, our client has been Monsignor Bergoglio, now — the Pope,” said the sign on the barber’s door.

© REUTERS / Tony Gentile
Pope Francis, Hollande Hold Unofficial Talks in Vatican
The “Pope Francis” tour takes place on weekends and public holidays and lasts for three and a half hours.

Over the weekend, 1,152 visitors took the tour. This might be the start of a new rapidly growing industry, religious tourism.

According to global tourism statistics, about 300 million pilgrims go on religious tours each year, spending $18 billion in the process.

When the tour comes to an end, there are a number of souvenirs on offer, the best seller is a small model of the Vatican in white and yellow, representing the first and only Latin American Bishop of Rome.