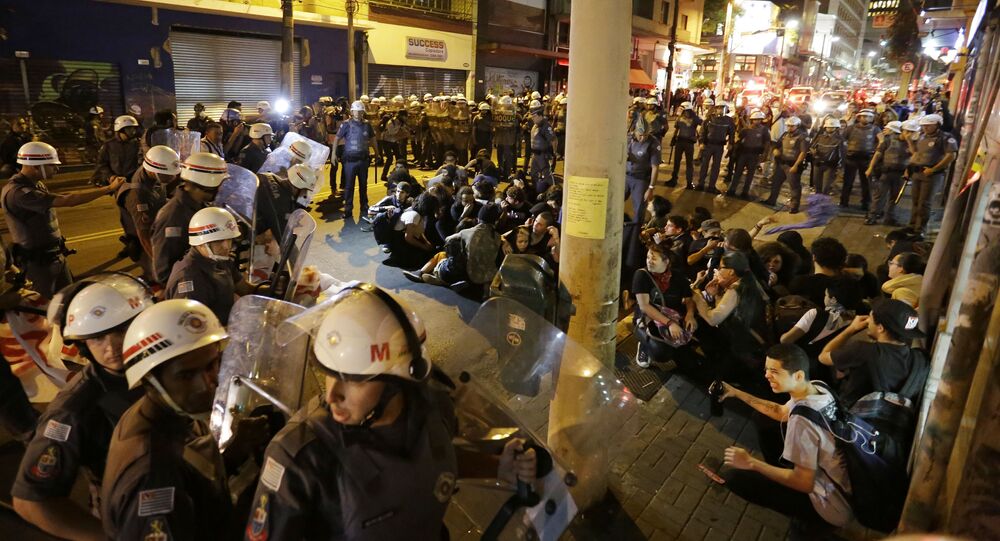 The opening ceremony of the 2016 Olympic Games in Rio de Janeiro was marred by protests that erupted in the Brazilian city.

© Sputnik
Rio Gripped by Protests as Olympics Go Into Full Swing (PHOTO)
Even as the Olympic torch was being transported along the coast, thousands of protesters gathered in front of the luxurious Copacabana Palace hotel.

Carrying signs and placards decrying the interim government and its head, Michel Temer, along with the infringement on workers’ rights and media support of the so called 'parliamentary coup' against Dilma Rousseff, whose party was hit by connections to the Petrobras corruption scandal. The protesters marched along the waterfront filled with foreign tourists.

José Carlos de Araújo, a lawyer and member of the Advocacy in Action (Advocaia em Ação) movement, told Sputnik that it is important to state their case while the city is in the spotlight.

"The society needs to mobilize and try to benefit from the Olympic Games which attracted various foreign delegations and even government officials. We need to seize the moment and expose the coup that removed the lawful government from power," he said.

Many protesters also believe that the security measures implemented by the authorities allegedly to protect the Olympic Games from possible attacks may in fact be used to suppress popular movements.

"A potential terrorist threat does exist, but it is mostly a threat to Americans and Europeans, not us. But since they come here, then yes, this threat exists," a protester named Val Carvalho said.

He also pointed out that a group recently arrested by the authorities had nothing to do with terrorists, and added that the media hype regarding that event was nothing more than a show aimed at whitewashing the ongoing crackdown.

Alessandro Biazzi, a teacher at the Federal Center for Technological Education of Rio de Janeiro, said that a "coup during Olympics is consistent with an international model of major events which is neither democratic nor inclusive." He stated that both the International Olympic Committee and FIFA share responsibility for the current state of affairs.

"Those who took to the streets to protest are the ones who truly strive to preserve the Olympic spirit," the protester declared.

Jaime Muniz Martins, ex-head of the Federation of Favelas’ Association of Rio de Janeiro (Federação das Associações de Favelas do Rio de Janeiro), blasted the media for manipulating information regarding the ongoing political turmoil, in the country and claiming that "the people, especially the poorest residents of favelas, are losing their rights." Martins added that the media lied when claiming that the coup was committed with the people’s interests in mind.

And many protesters were also eager to point out the foreign influence in the Brazilian crisis, condemning the privatization of natural resources and the alleged US involvement in the country’s affairs.

"They (the US) were unable to cope with BRICS. The coup drives Brazil into isolation regarding the strategic energy issue because pre-salt oil is now being sold to foreign transnational corporations; and the space program is once again handed over to the US," he said, referring to the Alcantara Space Center.

Equally vociferous protests were launched against suspended President Dilma Rousseff last year prior to her; opinions have been divided over her leadership and personal involvement in the Petrobras scandal. She was officially suspended from her role in May pending an impeachment trial.

Amid Fears of ‘Dirty Bomb’ at Rio Games, Top-Notch Detectors Sent to Brazil