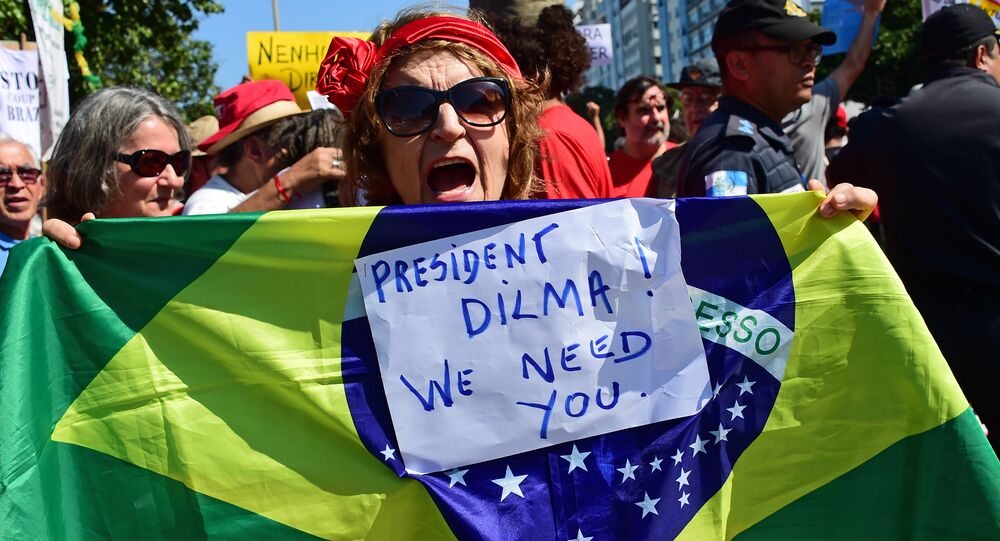 Jose Carlos de Araujo, a lawyer who is taking part in the protests against a coup that is keeping the legitimate government in Brazil from power, said that society should mobilize and take advantage of the Olympic Games, attended by different foreign delegations, and draw attention to a coup.

© AFP 2019 / EVARISTO SA
Brazil Coup Government Wins Gold for 'Total Destruction' of Social Security
MOSCOW (Sputnik) — Society should take advantage of the 2016 Olympic Games underway in Brazil's Rio de Janeiro to draw attention to a coup that is keeping the legitimate government in the country from power, protesters told Sputnik.

Brazil is currently on a bumpy political course, as Dilma Rousseff has been suspended from presidential office for 180 days, pending trial, over accusations of concealing the country's budget deficit ahead of the 2014 re-election. Vice President Michel Temer has assumed presidency during that period. As the country was readying to open the Olympics, protesters marched with banners along the streets of Rio, expressing their dissatisfaction with Temer.

"Society should mobilize and take advantage of the Olympic Games, attended by different foreign delegations and even government officials. We need to seize the moment and reveal a coup that is keeping the legitimate government from power," Jose Carlos de Araujo, a lawyer who is taking part in the protests, said.

On August 5, as Temer was declaring the Olympic Games open, he was booed and jeered.

© Sputnik / Алексей Куденко
Interim Brazilian President Announces Official Start of 2016 Summer Olympic Games in Rio
The protesters believe that a terror threat and security measures could be used by the authorities in order to silence those dissatisfied with the Temer government.

"Potentially, there is a terror threat. But it is directed mainly against Americans and Europeans, but not against us. but since they come here, there is such a risk [of a terror threat]," protester Val Carvalho told Sputnik, adding that a recently detained group of protesters had nothing to do with terrorism.

People chanting "Terrorists are the state" could be heard during the protests, according to a Brazilian teacher who took part in the rally.

Jaime Muniz Martins, the former head of the Federation of Associations of Favelas of Rie de Janeiro, said that major media outlets manipulated the information to their advantage, and accused them of portraying the coup in the country as a positive moment for people.

"People, especially the poorest residents of favelas, are losing their rights," Martins said, pointing out that favela residents gained access to healthcare and education under the administrations of former President Luiz Inacio Lula da Silva and Rousseff.

Another protester, Mozart Rangel, told Sputnik that the coup in Brazil was serving to isolate the country in terms of energy supplies and space program, as elements of those spheres were sold or transferred under the supervision of other states and foreign corporations.

According to the organizers, about 30,000 people took part in the Friday protests in Rio de Janeiro.