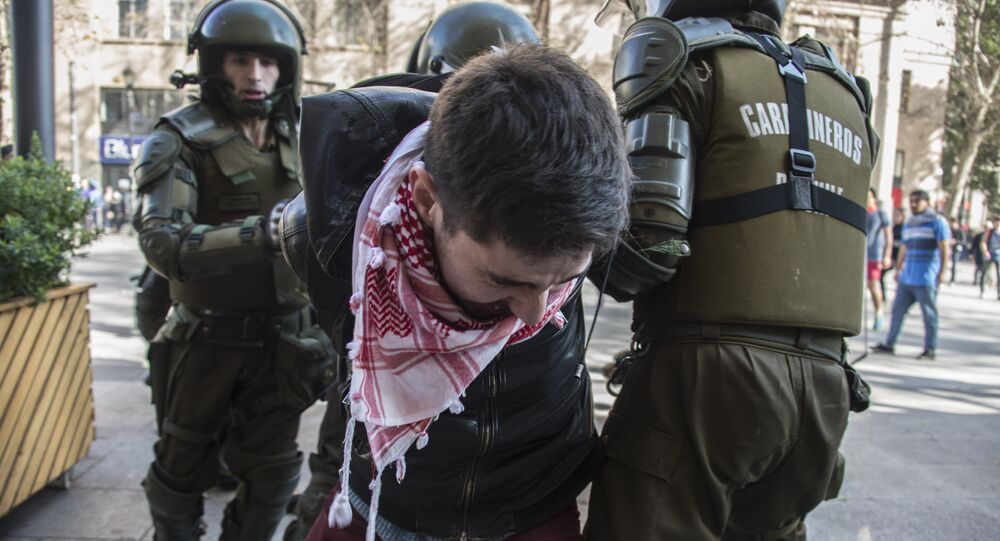 Thousands of Chilean students took to the streets on Tuesday in protest over the government's education reforms and demanding the resignation of the country's Education Minister Adriana Delpiano, local media reported.

#Chile: Photojournalist is arrested during march of students, in #Santiago today. #MarchaEstudiantil via @Kafkava pic.twitter.com/cQDXdHKsSE

​Clashes with police resulted in 140 arrests, with some instances of injuries reported, including the beating of one journalist.

Student protest have become increasingly common in the Latin American country since the government announced plans to introduce free education that have been slammed as ill-conceived and discriminatory.

#Chile: Protest in solidarity with students arrested during the march for better free education in #Santiago Yday. pic.twitter.com/zzcvgV352z

​While some 165,000 students can attend 30 universities for free this year, critics have pointed out that the reforms only cover households with the lowest incomes while leaving the rest ineligible. Several universities have also been exempt from the plans.

Police use water cannon and tear gas against students in #Santiago, #Chile — https://t.co/IBRGV0kXH1

​Education in Chile is one of the most expensive in the world, with Chilean students paying up to five times as much as their peers do in Organisation for Economic Co-operation and Development (OECD) countries. The problem has persisted since the rule of Augusto Pinochet, whose military government subjected the country to neoliberal market reforms.