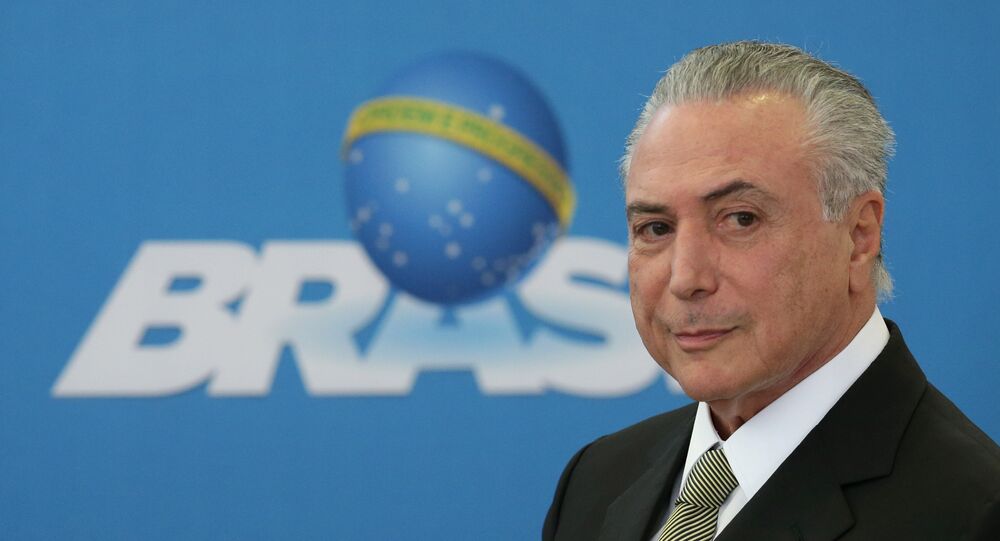 In two weeks, the highly-orchestrated rightwing impeachment of Dilma Rousseff, viewed by many Brazilians as a coup, has been beleaguered by a combination of incompetence by the Temer government and a series of leaked audio files implicating key cabinet ministers in their plotting of the “impeachment” as a means to derail a far-reaching corruption probe.

The façade of Michel Temer’s legitimacy unraveled just days into his administration, when Brazilian newspaper Folha de Sao Paulo released an audio recording and transcript of a conversation between the country’s Planning Minister, Romero Juca, and oil executive Sergio Machado, discussing how to put Temer into office to “stop the bleeding” from the so-called Car Wash Investigation into petroleum giant Petrobras.

At the time, Juca also served as the president of the Brazilian Democratic Movement, the same political party of the chief participants in the impeachment, Temer, Senate leader Renan Calheiros, and disgraced former lower-house leader Eduardo Cunha. Juca stepped down from office immediately following the release of the news story.

On Monday, it was Fabiano Silveira who became the second official to resign his post in the Temer Administration, after a second leaked recording exposed Brazil’s Transparency Minister, who is tasked with combating corruption, offering advice to Calheiros on how to undermine the Car Wash corruption probe, in which he, along with most of the country's high-ranking government officials, is implicated.

In the two weeks that Temer’s transition government has held power, it has moved to unravel the country’s social welfare state, eliminating the minister of culture, and has moved to replace regional commitments and the BRICS alliance with renewed deregulated system of trade with the United States. Temer, to many Brazilians is systematically reversing 13 years of policies advanced by the Workers Party.

With the once vibrant South American economic powerhouse reeling under a neoliberal agenda, Loud & Clear’s Brian Becker sat down on Wednesday with Aline C. Piva and Juliana Moraes, of the group Brazilian Expats for Democracy, to discuss what might happen next.

​"Brazilians have taken to the streets," said Piva. "When Michel Temer first assumed control of the government he started a rollback of the social policies that have been in effect for a decade and a half in Brazil. He cut back social programs and he extinguished the minister of culture. In less than one week he rolled back 13 years of social achievement."

The current administration is evidently corrupt, but what about Dilma Rousseff?

"There are no investigations under Dilma Rousseff’s name for corruption, and there is nothing that would show that she is a corrupt politician," explained Moraes. "What we are seeing is that the people who are looking to oust her actually have dirty records. The current interim president is supposed to be somebody who is unelectable. He has dirty records, which mean corruption charges against him, so for the next eight years he is not supposed to even be in office."

She also explained that the recent release of audio files exposing Romero Juca’s coup plot and Fabiano Silveira’s plans to undermine the corruption probe have led to cries for Temer to go, with many protesters labeling him "Golpista" for "coup leader."

Was this coup orchestrated to force US-backed neoliberal economics on Brazil?

"Absolutely," said Piva. "The first day of Temer’s administration made clear that the neoliberal agenda is back in place in Brazilian politics."

The activist explained that Temer’s administration has moved to revoke or offset existing commitments in Latin America, the developing world, and with Russia and China in favor of a push toward US-centric bilateral trade deregulation.

"Jose Serra, the new minister of foreign affairs, in his first speech, made very clear that Brazil is going to roll back the policies that led to more independence in the region," said Piva.

Moraes took a stronger line, comparing the present situation to the US-backed 1964 Brazilian military coup, noting similar involvement in the proceedings by the US ambassador. "Now we have Liliana Ayalde, the current ambassador to Brazil and the former ambassador to Paraguay in 2008 to 2011, when there was a coup there, who is writing op-ed in the right-wing newspaper O Globo about how Brazil is an essential market for American corporations, a must-play for US business."

She said that America aims to undermine the multilateral associations established by Brazil’s Workers Party with South American countries, and also looks to fracture the BRICS economic alliance for challenging the domination of the World Bank and the IMF. "Yes, there is some involvement by the US," stated Ayalde.