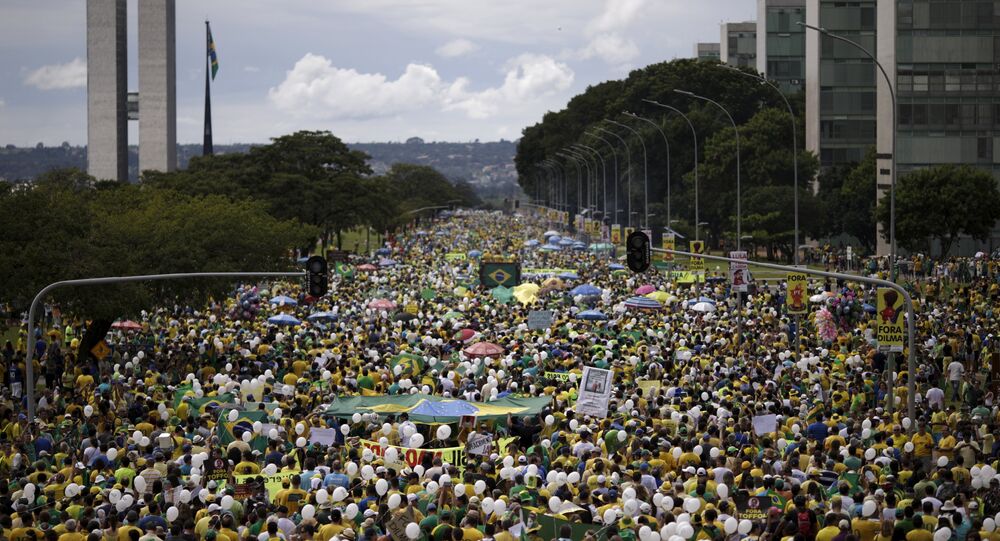 The Western-led effort to introduce austerity and privatization to Latin America against the will of the people has advanced, with yet another criminal investigation into Brazilian President Dilma Rousseff.

On Wednesday, embattled Brazilian President Dilma Rousseff awoke to yet another threat against her faltering political leadership as the country’s top prosecutor announced a new criminal probe of her administration, this time for obstruction of justice.

The 68-year-old Brazilian leader currently faces a 180-day suspension from office beginning next week, pending an impeachment trial by the Senate on allegations of breaking budget laws. The move to suspend Rousseff from office comes after a majority of the Lower House voted to advance impeachment proceedings. If 2/3 of the Brazilian Senate then supports impeachment, Rousseff will be permanently barred from office.

Rousseff finds herself hounded by growing opposition in the form of allegations in association with the so-called Car Wash investigation, a kickback probe focusing on state-owned oil giant Petrobras, construction contractors, and politicians from the Brazilian leader’s ruling Workers Party.

Workers Party supporters allege that the criminal probe, resulting in bribery charges against former Brazilian President and Workers Party founder Luiz Inacio Lula da Silva, amounts to nothing more than a Western-led coup d'état. These suspicions stem from the release of incriminating documents obtained through NSA surveillance and subsequently distributed to a rural Brazilian jurist.

President Rousseff shielded Lula da Silva from criminal prosecution, and the specter of imprisonment, by immediately appointing him her Chief of Staff, a move which granted the former head of state immunity against prosecution.

Despite the opposition against the Rousseff regime in Brazil’s legislature, public opinion has shifted strongly in favor of the country’s leader. Brazilians fear an ascendency of the unpopular Vice President Michel Temer and the opposition Democratic Movement, seizing political power against the will of the people and shifting toward neoliberal economic reforms that eviscerate the country’s public sector.

On Wednesday, the Brazilian President confidently condemned the criminal probe saying, "If an investigation is opened I am sure it will show that Senator Delcidio do Amaral was lying once again."

Nonetheless, the days of the Dilma Rousseff presidency and the democratically elected Workers Party appear to be numbered in the face of the latest investigation. Court documents released on Tuesday show Prosecutor General Rodrigo Janot requested authorization from the Brazilian Supreme Court to investigate Rousseff, Lula da Silva, and Petrobras for actively obstructing the Car Wash corruption probe.

Reports out of Brazil indicate a growing awareness among Vice President Michel Temer’s opposition coalition that Rousseff faces an uphill battle defending herself before the Senate, especially now that another criminal investigation is on the horizon. Temer began forming a transitional government this week ahead of becoming the country’s acting president. The coup beneficiary looks to serve out the remainder of Rousseff’s term, which ends in 2018, if the Senate votes in favor of impeachment.

International analysts speculate that a Temor regime would look to secede from the BRICS trade alliance, the powerful economic union developed to challenge Western trade hegemony. A potential dissolution or weakening of the BRICS alliance could have damaging economic ramifications for the group’s member states which include Brazil, Russia, India, China and South Africa.

Can't Stop Me Now: 'Republicans Are Unable to Stop Trump at This Point'