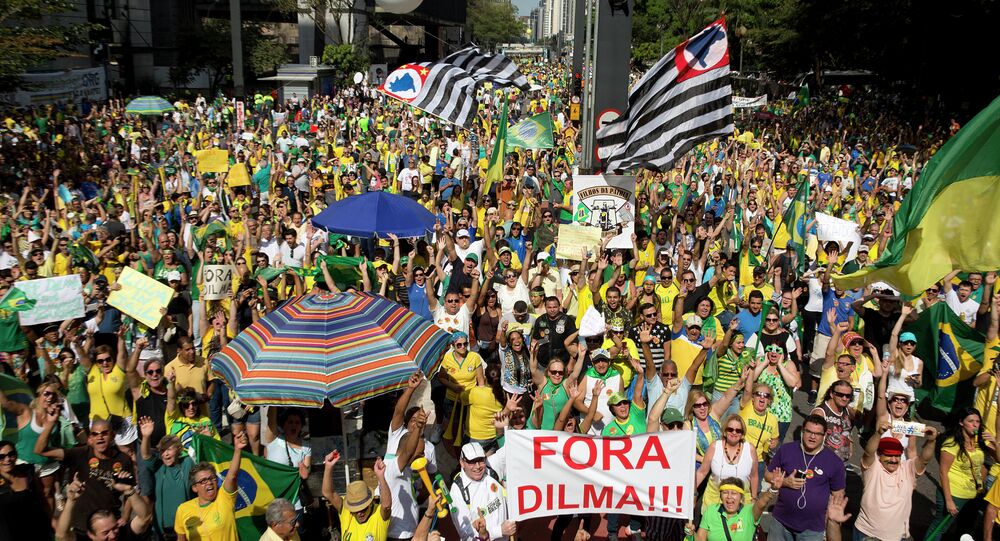 Brazil’s Government Driven to Verge of Collapse by Elites, US Intervention

Loud & Clear’s Brian Becker sat down Friday with journalists Pepe Escobar and Priscilla Chandretti to discuss the reasons behind street protests demanding the impeachment of President Dilma Rousseff on charges of corruption.

© AP Photo / Eraldo Peres
Dilmagate? Release of Tapped Calls Puts Brazil’s President in Line of Fire
Opponents criticize President Rouseff’s decision as a blatant attempt to obstruct the investigation by immunizing Lula da Silva from prosecution. Supporters, meanwhile, contest that the investigation is a politically motivated attempt by elites and the US to overthrow the government.

What is happening on the ground?

"We have had many protests in the last few days with the protesters decrying corruption, but there is also a lot of misreporting and attempts to inflate these protests," said Chandretti. "In my opinion, the facts of the case are fabricated to create this situation, the protests are mostly by the wealthy elites, and even though the workers are not happy, they are not joining the protests."

Escobar agrees, suggesting that there is rampant corruption in Brazilian politics, but that the investigation should be looking at opposition leaders instead. "Yes, it is a corruption scandal because a corollary of the historic exploitation of Brazil is that the elites are extremely corrupt and practically the whole Brazilian Congress is corrupt and it goes across political parties."

What is the political climate in Brazil?

"Everything in Brazilian politics traces back to slavery," explained Escobar. "Remember Brazil was the last country in the Western hemisphere to abolish slavery."

Escobar believes that, due to Brazil’s long history of slavery and the subsequent exploitation of its political process and resources by foreigners, there is an ingrained mentality among elites who see workers as inferior.

"You had 50 or 60 families that controlled all the wealth, and today you have a little more, about 200 families, but it is the same mentality, it is like the mindset of plantation owners if you were in the United States in the Deep South in the 19th century," Escobar said.

While oppression has historically been of poor, mixed-race, or black people, Escobar notes that those formerly disenfranchised groups are the majority of Brazil and, under the Workers’ Party, they’ve taken back control. "What Lulu did during his eight years in power is that he reversed that situation, creating a tremendous backlash from the elites."

Is the US media and government behind efforts to overthrow the government?

"There is a direct interference from abroad by our usual suspects," said Escobar. "It started with the NSA spying on PetroBras and President Dilma herself and most of the information from this surveillance was delivered to the 'carwashing investigation.' That was the genesis of this."

Becker suggests that it may not just be the US government interfering with Brazilian politics, but a concerted effort by corporate media to frame the story in opposition to the current leadership.

Escobar explained that there is an effort to "reverse the pink decades," and that it extends beyond the US government and the media. "Lula had a close relationship with the Cuban government, he was against Western business exploitation which influenced all of Latin America, and the US found this unbearable, but it is Big Oil that has the grudge against Lula."

He explained that state-owned PetroBras discovered and took sole claim to the "pre-salt" oil field, the largest oil deposit discovered in the 21st century, under Lula’s leadership. "US companies like Exxon-Mobil tried to swoop in to claim the oil, but Lula repelled them and now it is a gold mine of Brazilian wealth."

However, there is a renewed effort by Western interests to pillage Brazil’s oil wealth from the pre-salt discovery. "Now you see the Brazilian senate trying to change the law to open up the oil field to foreign companies and this is something that the Workers Party has always refuted so that is the very big reason for foreign intervention."

Is the government in danger of failing?

"We are in a very dangerous situation," said Chandretti. “There were a lot of illegalities in how the carwashing investigation was conducted from the very beginning, so you have the judiciary trying to take a place within the political process, trying to influence it.”

Escobar agreed, suggesting that the timing of the entire investigation is curious. "They seized on Dilma when she took office because Dilma is not a statesperson like Lula was. Lula is a statesman, a candid negotiator, and a first class politician, whatever his faults, and whether or not the corruption allegations against him are proven, but Dilma is more like a low level manager."

Escobar, holds out hope that the Brazilian government will be able to fend off the latest flurry of foreign sabotage. "If Lula goes back to the government now, and if he runs again in 2018, he will win, that is a fact, he is the most popular president in Brazil. This means the Workers’ Party will be in power for the next 10 years which the Brazilian elites and the US see as unbearable."