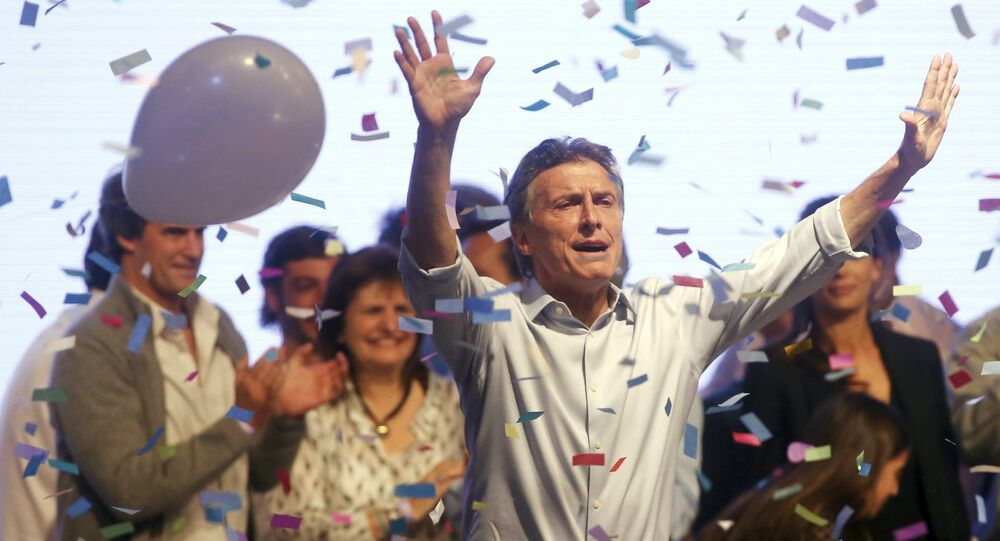 On Sunday, Argentina held a runoff vote to pick its next president, resulting in a narrow victory for conservative Let's Change coalition candidate Mauricio Macri over his center-left Front for Victory coalition opponent, Daniel Scioli. The question on everybody's mind now is: what should Argentinians, and the world, expect from the new government?

© AFP 2021 / ALEJANDRO PAGNI
Argentina Ruling Party’s Presidential Candidate Admits Defeat in Elections
An estimated 80% of Argentina's 32 million eligible voters went to the polls on Sunday to elect their next president, in a runoff vote between the two leading candidates from the first round of voting, held in late October. With 51.5% of the votes cast in favor of conservative candidate Mauricio Macri, the favorite of the country's big business and private media, the country is set for a hard right turn.

In the run up to the election, analysts in both Latin America and abroad had worryingly suggested that a Macri victory would result in a rollback of outgoing President Cristina Fernandez' policies. Her government had taken a stalwartly independent stance over the past decade, aimed at challenging the global hegemony of both Washington policymakers and Wall Street debt collectors.

Daniel Scioli, the candidate of the Peronist, center-left Front for Victory electoral alliance, had promised to continue the outgoing president's center-left-oriented politics domestically, and to pursue an independent foreign policy course abroad.

Throughout Fernandez' tenure (she was elected in 2007) and that of her late husband, Nestor Kirchner (elected in 2003), Argentina had aligned itself with the string of left-wing Latin American governments emerging in the region in the early 2000s, while pushing for new economic and political ties with the BRICS countries, including Russia and China. Now, with Macri's victory, the country's multipolar outlook is under threat.

At the moment, Russian-Argentinian political and economic ties are believed to be at historic highs, characterized by the Russian ambassador to Buenos Aires as "excellent" and "extremely constructive and trusting." Earlier this year, ahead of Fernandez' official state visit to Moscow in April, Argentina's Ambassador to Russia, Pablo Anselmo Tettamanti, went so far as to describe relations to be at the highest levels they have ever been in the countries' 130-year-long history of bilateral relations.

During her visit to Russia, President Fernandez met with President Vladimir Putin, signing over 20 memoranda on economic cooperation, said to amount to an "all-encompassing strategic partnership."

The agreements included joint projects on the development of hydroelectric, nuclear and fossil-based energy in Argentina, including the construction of the sixth bloc at the Atucha nuclear power plant, along with a $2 billion memorandum on the construction of a new hydroelectric dam. Meanwhile, Russian energy giant Gazprom signed a memorandum on the exploration and development of gas fields with Argentine state gas company YPF, a deal amounting to $1 billion in investments. Russian company Uralmash was also tapped to build a plant manufacturing oil extraction equipment, amounting to an additional $1.9 billion in investments.

© Sputnik / Alexei Druzhinin
Argentina Keen to Deepen Cooperation With Moscow - Trade Commission
In the course of the visit, the two countries promised to conduct consultations on the use of each other's national currencies for trade, pledging to increase cooperation in the military-technical sphere, accelerating cooperation related to the GLONASS satellite navigation system (Russia's alternative to the US-built GPS network), and negotiating the prospects of increasing bilateral food trade (which presently amounts to about $1.3 billion annually).

In the sphere of political cooperation, President Fernandez voiced her support for Moscow's position that the situation in Ukraine could only be resolved by peaceful means. The Russian president, for his part, pledged his support for "Argentina's striving for direct talks with Britain to achieve a prompt resolution to the Mavinas [Falklands] Islands dispute."

Visiting Moscow in July, Argentinian Vice President Amado Boudou emphasized that Argentina's diplomatic moves toward improving relations with Russia were based on the fact that the two countries "share a very strong position with a common vision of the need for a multipolar world to ensure the existence of an inclusive and autonomous policy."

Now, following Macri's election victory, Argentina's strategy of promoting regional integration in Latin America, and a multipolar world order, may be coming to an end. Despite Mexican economist Ariel Noyola Rodriguez suggesting only months ago that the Russian-Argentinian partnership signaled "Washington's incapacity to sabotage the construction of a multipolar world," it seems that the analyst may have spoken too soon.

With Fernandez (and her husband before her) becoming a major thorn in Washington's side, the latter unhappy over the Peronists' efforts to extract the country and the region from its subservient position in the US's so-called 'backyard', the election of Macri, who has promised to immediately improve relations with Washington, must come as a welcome change.

The conservative politican has already hinted that he would give less weight to Mercosur –the South American trade bloc aimed at ensuring regional economic integration and development, and shift the country's diplomacy away from close cooperation with the leftist governments of Venezuela, Bolivia, Ecuador and Brazil.

And while his victory may not nullify the existing economic and other cooperation agreements reached with Russia, China, and other BRICS countries over the past decade, it does threaten Buenos Aires' general trajectory of development –the country's moves toward regional integration and a multipolar world independent of Washington's influence.

For the Argentinian People: A Return to Neoliberalism?

As far as the Argentinian people are concerned, Macri's victory is feared by his critics to mark a throwback to neoliberal dogmas which plagued the country prior to Kirchner's 2003 election victory.

For their part, the British and American business press couldn't help but gloat over Macri's victory. The Financial Times suggested that this was "the beginning of a new political era for South America's second-largest economy." The Wall Street Journal, meanwhile trash-talked Fernandez and her party, suggesting that her economic policies, "uncivil rants against her political opponents, and a substantial loss of judicial independence and press freedom during kirchnerismo" contributed to Scioli's defeat. Bloomberg Business focused on the election's effects on the markets, finding it crucial to point out that "in anticipation of a Macri victory, bond yields fell to an eight-year low and the local stock market rallied to a record high."

But not everyone is convinced that this 'new political era' will bring positive changes, at least for ordinary Argentinians. In the run up to the vote, Scioli and his supporters warned that Macri's proposals, which promised a return to neoliberal economic policies, would amount to "savage capitalism," eroding social welfare and creating an economy which catered to a wealthy minority.

© AFP 2021 / BRENDAN SMIALOWSKI
No Brains in Washington
It's worth recalling that before the Kirchners, Argentina was viewed as a textbook example of a developing country enveloped by the so-called Washington Consensus, a set of neoliberal economic dogmas which resulted in extremely high unemployment (over 25% in 2003), high poverty rates (nearly 55%), and a high Gini index.

Under Fernandez and her late husband, the country pursued social and economic policies that amounted to the creation of a mixed Keynesian economy, promoting government intervention where necessary, support for medium and small businesses, and a push for export growth via regional economic integration.

According to pan-Latin American news channel Telesur, these efforts resulted in the reduction of unemployment to 6.6% in 2015 (with 5 million jobs created over the past ten years), the reduction of poverty from over 50% to 6.5%, the creation of 50,000 small and medium-sized businesses, a major industrialization drive via the Industrial Parks National Program, increases in the share of GDP spent on education and pensions (from 3.6% and 4.1% in 2003 to 6.5% and 7.7% of GDP in 2013, respectively), and the near doubling of public investment, all the while reducing the national debt from 166% of GDP in 2003 to 41%.

In the area of social policy, Kirchner and Fernandez began a comprehensive reform of the country's justice system (making the Supreme Court independent), while annulling the 'laws of pardon' which gave immunity to the leaders of the country's military dictatorship of 1976-1983 accused of crimes against humanity. The country also became the first in Latin America, and the tenth in the world, to pass equal marriage laws, in 2010.

Now, these gains, which came at a cost of high inflation (offset to an extent by annual negotiations between unions, employers and employees on adjusting wages) are under threat, with Macri's critics saying his policies (including tax cuts, social spending cuts, and privatization schemes) will favor big business and the country's oligarchs, sidelining the problems of social inequality, and reverting the country to its 90s' era social and economic malaise.

© REUTERS / Ivan Alvarado
Cooler Heads to Prevail: Argentina, Russia Likely to Maintain Cooperation
Critics have also pointed to Macri's promises of beginning negotiations with the predatory 'vulture fund' creditors that rejected the debt restructuring which took place following the country's default in 2002, giving an indication not only of his upcoming domestic economic policy, but also his possible subservience to the Western-dominated economic institutions which Argentina rejected under the Kirchners.

Ultimately, only time will tell whether Argentina's new government will continue to pursue policies based on the economic and political pragmatism which have brought Buenos Aires closer to other countries looking to challenge global unipolarity (with some analysts already suggesting that they will).

As far as Argentina itself is concerned, it remains unclear how a return to the neoliberalism which devastated the country's economy in the early 2000s will do it any good. As Russian social media users and bloggers commenting on the election results lamented, it seems that too many Argentinians have forgotten the neoliberal catastrophe and 'de-sovereignization' of the 90s, processes which Russians themselves know only too well.