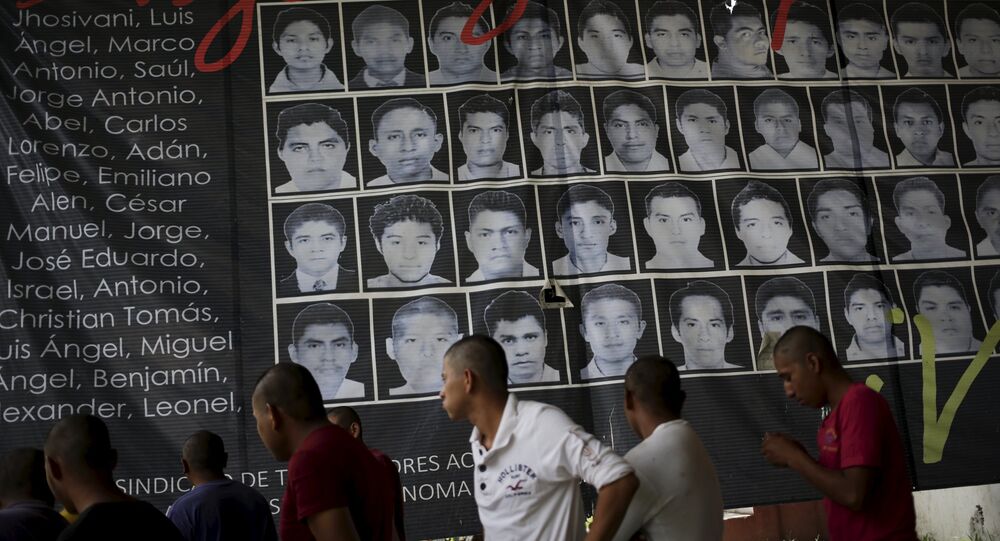 In September 2014, 43 male students from the Ayotzinapa Teacher Training College went missing in southwestern city of Iguala, State of Guerrero, after they participated in a protest against discriminatory hiring and funding practices in the city. The students were last seen being forced into police vans after the officers opened fire, killing six.

The Mexican government blamed the abduction and murders on local drug cartels. However, there is evidence that the local police and army were complicit in the kidnappings. The victims' families and teachers' unions have claimed the government was quick to shift the blame to criminal gangs to close the case.

An independent panel of international experts appointed by the Inter-American Commission of Human Rights (IAHCR) published a report on Sunday refuting the official claim that the 43 students had been burnt at a trash dump hours after they went missing, Human Rights Watch (HRW) said.

According to the watchdog, the report challenges the official account of events presented by the Attorney General’s Office, as the expert group found no evidence to support the hypothesis and claimed it was impossible to cremate 43 bodies in a trash dump.

"This report provides an utterly damning indictment of Mexico’s handling of the worst human rights atrocity in recent memory," Jose Miguel Vivanco, Americas director at HRW said in a statement. "Even with the world watching and with substantial resources at hand, the authorities proved unable or unwilling to conduct a serious investigation."

The investigators urge Mexican authorities to reinforce their efforts to bring those responsible for the forced disappearances of the students to justice, to clear up their whereabouts, and "thoroughly investigate links between authorities and organized crime groups," HRW said.

The kidnapping, disappearance and alleged deaths of the students became one of the biggest scandals during the administration of Mexican President Enrique Pena Nieto, whose six-year term began in 2012.

In early November, 2014 the former mayor of Iguala and his wife were arrested in Mexico City on charges of masterminding the abductions. The former Iguala police chief, wanted on allegations of his involvement in the atrocity, remains at large.

US Should Investigate New Mexico Church Bombings as Hate Crimes

Mexico Calls on US to Investigate Police Killings of Immigrants