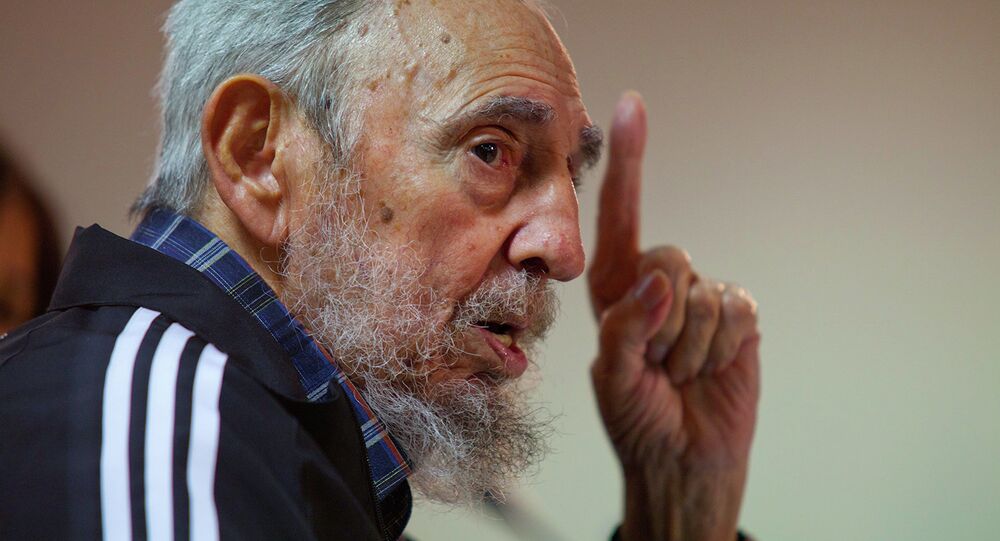 On His Birthday, Fidel Castro Wants US to Repay Cuba the Millions it Owes

Fidel Castro turned 89 on Thursday, and to mark his birthday, the former Cuban President requested that the United States pay back the "many millions of dollars" owed to his country because of the 50-year-long old embargo.

© AFP 2021 / HO/www.cubadebate.cu/Estudios Revolucion
For the Love of Cheese: Fidel Castro Makes Rare Appearance at Food Summit
Fidel Castro ceded power to his brother Raul in 2006, when he stepped down because of failing health. Since then, the former Cuban president has remained outside of the public eye, becoming a frequent contributor of essays to communist party newspapers.

On his 89th birthday, Castro wrote one such essay in his "Reflections" column for the official Granma newspaper, in which he insisted that the US owes Cuba quite a bit of money.

"Cuba is owed compensation, the equivalent of damages, amounting to many, many millions of dollars, as our country has reported and irrefutably documented at the United Nations," he wrote.

The essay’s publication, and Castro’s birthday, come on the eve of the historic reopening of the US Embassy in Havana. The embassy’s reopening is part of a restoration of diplomatic relations between the US and Cuba, and has been in the works for eight months since US President Barack Obama and Raul Castro announced plans to restore relations after half a decade.  US Secretary of State John Kerry is also expected to arrive to Havana for the opening ceremony.

Castro’s essay does not offer an exact number as to how much he thinks Washington owes Havana, nor does he mention Kerry’s upcoming visit. The former president does however go into analyzing the aftermath of World War II and the amount of money the US has accumulated since.

For their part, the US State Department has responded to Castro's statement, saying that the reestablishment of diplomatic relations between the US and Cuba will most likely not include discussions on the reparations for the losses Havana has endured under the trade embargo.

"There are lots of issues that in the process of normalization I suspect will be discussed," State Department spokesman John Kirby said during a press briefing on Thursday. "I have seen nothing that would indicate that [reparations] is one of them."

US President Obama also wants to lift the embargo, but US officials insist the process will take time and will require congressional action, as it does not fall under restoring diplomatic relations.

Many Republicans, who control both the House and the Senate, are against the idea of normalizing ties between the two countries, arguing that Cuba needs to improve its human rights record before the trade embargo could be lifted.

Fidel Castro’s Daughter to Address Agriculture Trade at US Summit