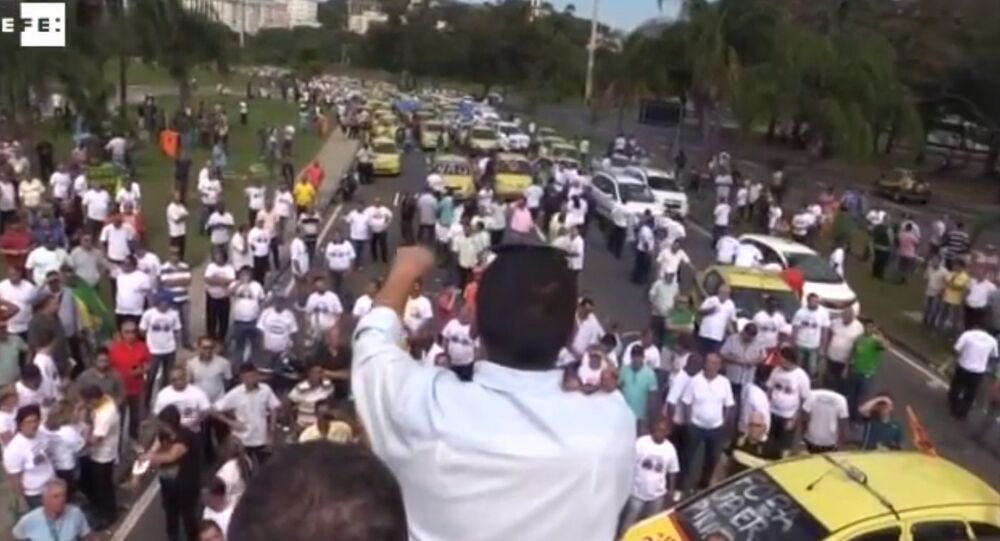 More than a thousand yellow cabs blocked one of the main traffic routes in Rio de Janeiro on Friday, as taxi drivers protested against the rideshare service Uber.

© AP Photo / Eric Risberg
Uber Facing $7.3 Million Fine or Getting Booted Off California
The line of cabs stretched for about three miles, stalling traffic on the one of the city’s busiest roads in the midst of morning rush hour. Outraged taxi drivers honked their horns, and Uber Technologies Inc responded, offering free rides to customers on what it called a “difficult day for getting around,” the Guardian reported.

“We want to combat the illegal [drivers]. We are the official ones, we have a responsibility, we are professionals who have families,” protesting taxi driver Alexander Campos stated.

Protest of taxi drivers in #Rio against @Uber pic.twitter.com/vY8wVY2zZv

Watching the citywide protest of cab drivers against @Uber in Rio from my parents's window. Cray. pic.twitter.com/S8R6VdoYBZ

Uber is a mobile app-based rideshare service that allows customers to connect with non-professional drivers for a cost that’s generally lower than that charged by licensed cab drivers.

The company claims clients have a right to choose how to ride across the city, pointing out that “innovation [in the sphere of public transportation] is crucial.”

© AFP 2020 / Ane Christine-Poujoulat
Uber Violent: Paris Cabbies Burn Cars in Protest Against Illegal Ride Share
The Uber Revolution has sparked waves of protests across the globe, as local taxi drivers complain that Uber drivers aren’t properly regulated and have fewer overhead costs, which makes them unfair competition, according to the Guardian.

Lawmakers in Sao Paulo and Brasilia have already voted to ban Uber following taxi driver protests there against the company; those bills are waiting on executive approval before they go into effect.