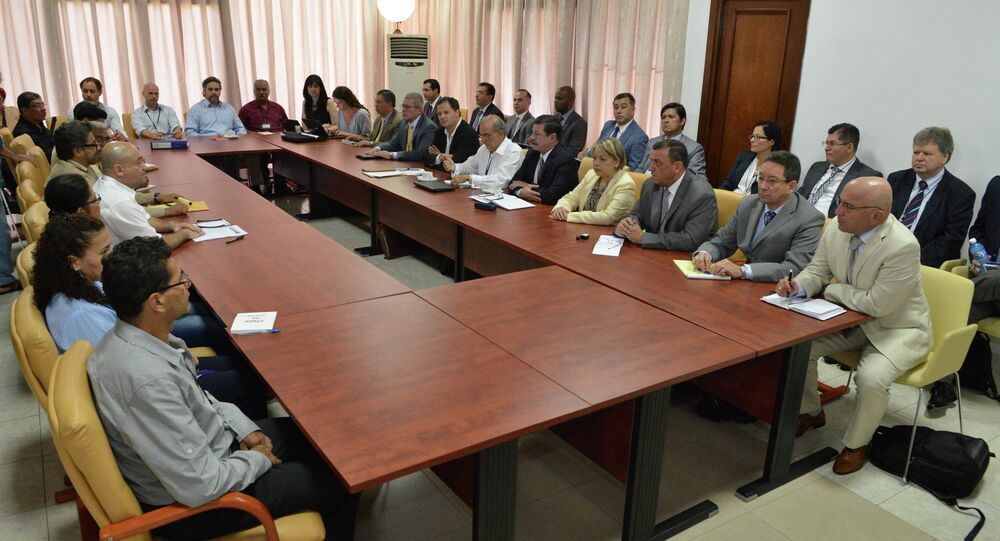 Members of the Revolutionary Armed Forces of Colombia (FARC) have forced drivers to empty oil they were transporting in a forest area in the southwestern Putumayo Department, with the environmental sabotage being staged amid moderate progress in the rebels’ peace talks with the government.

MEXICO CITY (Sputnik) – According to local reports, about 200,000 gallons of oil were emptied in the Putumayo forest area from 19 tanks on Tuesday.

The incident comes amid last week’s progress in peace talks between FARC and Colombia’s government that reached an agreement on the creation of a joint Truth Commission on June 4.

Colombian President Juan Manuel Santos wrote on his Twitter page on Tuesday that he instructed the Ministry of Environment and Sustainable Development of Colombia to deploy the necessary devices to mitigate environmental damage by the oil spill in Putumayo.

In a separate post, the president wrote that he had asked the military forces to strengthen security measures to prevent such "terrorist acts" in the future.

© AFP 2021 / YAMIL LAGE
Colombian Government Forms Truth Commission With FARC Amid Peace Talks
The commission will gather testimony from victims and witnesses of Colombia’s civil war, although it will not be able to use the information to build criminal cases against FARC members, government troops or other fighters.

The FARC rebel group was established in 1964 as the military wing of the country's Communist Party. Since then, military confrontation between FARC and the Colombian government has been ongoing, with over 200,000 people having been killed in the civil war.

The two sides have been engaged in peace talks since November 2012, and have reached a number of important agreements including one on landmine removal. The issue of punishment for those responsible for killings and kidnappings during the civil war remains unresolved.