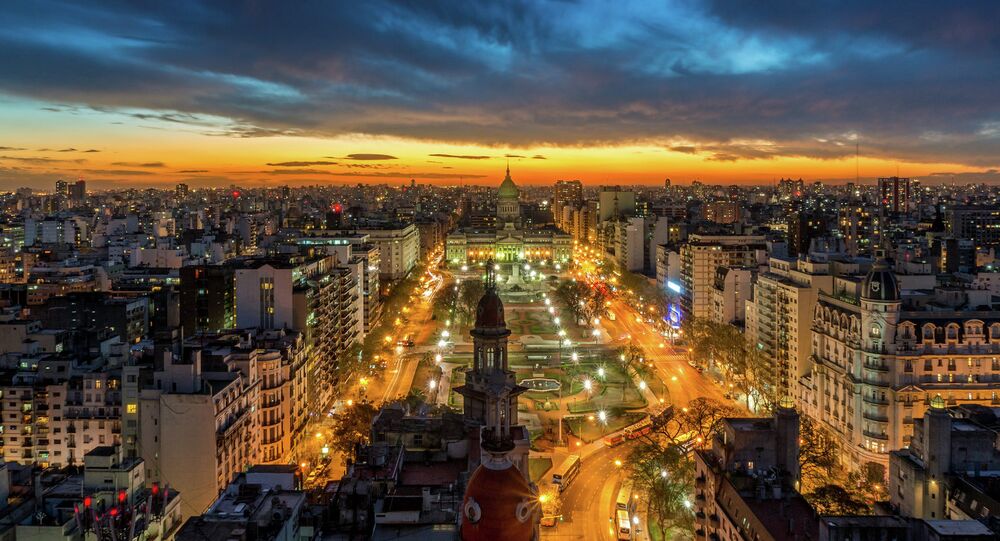 Speakers at the First International Forum for Emancipation and Equality have sharply condemned US policy toward Venezuela, with Bolivian Vice President Alvaro Garcia Linera saying that the US poses a threat not just to Venezuela, but to Latin America as a whole.

© AP Photo / Ariana Cubillos
Venezuelan Opposition Leader Would Be Considered 'Terrorist' in Spain
Participants at the International Forum for Emancipation and Equality in Buenos Aires have sharply condemned US foreign policy, with Bolivian Vice President Alvaro Garcia Linera going so far as to say that the US poses a threat not just to Venezuela's sovereignty, but to the sovereignty of Latin America as a whole.

"The United States poses a threat to the sovereignty of the countries of Latin America. It constitutes a serious threat to the lives of Latin Americans," Linera noted, adding that the US and Europe should recall their bloody history and remove their military and predatory corporate influence from the countries of the Third World before demanding political concessions from Venezuela.

Ignacio Ramonet, Spanish journalist, writer, and co-founder of Media Watch Global, agreed with Linera, commenting on what he sees as concrete instances of US interference in the internal politics of both Venezuela and Brazil. Ramonet stated that not a single day has passed since the death of Venezuelan President Hugo Chavez that the US and its allies have not planned for the overthrow of that Maduro government, citing a recent coup plot involving the bombing of the presidential palace and the murder of President Maduro and National Assembly Chairman Diosdado Cabello. "Now…Barack Obama has thrown off his mask, thrown morality aside and threatened Venezuela with a naval blockade," Ramonet added.

© Sputnik / Igor Mikhalev
US Lawmakers Urge Revoking Venezuela Diplomat Visa Over Opposition Comments
Ramonet stated that in his view, the Brazilian corruption scandal involving the partially state-owned oil company Petrobras is part of a "campaign aimed at delegitimizing the Brazilian government and resulting in new presidential elections, preventing the president from completing her term." The journalist pointed out that in the Brazilian Prosecutors' case against 54 officials, including 12 senators, 22 members of parliament, and the speaker of both the parliament and the senate, all but one are members of the governing coalition.

Pointing to the popularity of the democratic socialist policies promoted by Hugo Chavez and his counterparts throughout Latin America over the past 15 years, Ramonet noted that these policies are supported by the working masses because they have been successful in pulling 50 million people out of poverty and giving these people back their dignity.

On Saturday, Konstantin Kosachev, the head of Russia's Federation Council Committee on International Affairs, noted that Russia was concerned that the US may be planning a "déjà vu" repeat of the "Ukrainian scenario" in Caracas. Kosachev stated that the technology for producing revolutions includes street demonstrations, loud accusations of corruption against authorities, followed by "concern" from the US State Department over local law enforcement "exceeding the norms of permissible force," along with sanctions.

© REUTERS / Jorge Silva
Venezuela Seeks To Monetize Its Gold Reserves Amid Severe Cash Crunch
Kosachev recalled that US Congress recently passed a Law "On the Protection of Human Rights and Civil Society in Venezuela," which has been followed by sanctions and overt support for opposition forces accused of aiming to overthrow the Maduro government. Kosachev noted that "given all that has unfolded before our own eyes in Kiev over the past year and a half," the Russian Foreign Ministry's concerns over events "do not seem an exaggeration."

"These attempts to 'ignite' instability around the world from several ends at once, if one also recalls what is going on in the Middle East, cannot but cause the most serious concerns from any reasonable person," Kosachev concluded.

Kosachev's comments echoed those of Jesus Faria, Vice President of Venezuela's ruling United Socialist Party, who told Sputnik earlier this week that "the protest movements, the way we know them in Venezuela, are intended to burn the country down…This is the same tactic as we have seen in Ukraine, when the neo-fascist groups…toppled the legitimate government, setting the country on fire socially."

© AP Photo / Ariana Cubillos
Latin American Countries Unite Behind Venezuela in Clash With US
On Thursday, Nicholas Maduro responded to the US decision to list Venezuela as a threat to its national security, demanding "via all global diplomatic channels, that President Obama rectify and repeal the immoral decree declaring Venezuela a threat to the United States." Supporting her Venezuelan counterpart, Argentina President Cristina Fernandez de Kirchner noted that it's "absolutely incredible…absurd and unjustified" for a global superpower like that United States to think that a country like Venezuela could pose a threat to its security.
...
Reddit
Google+
Blogger
Pinterest
StumbleUpon
Telegram
WhatsApp
637