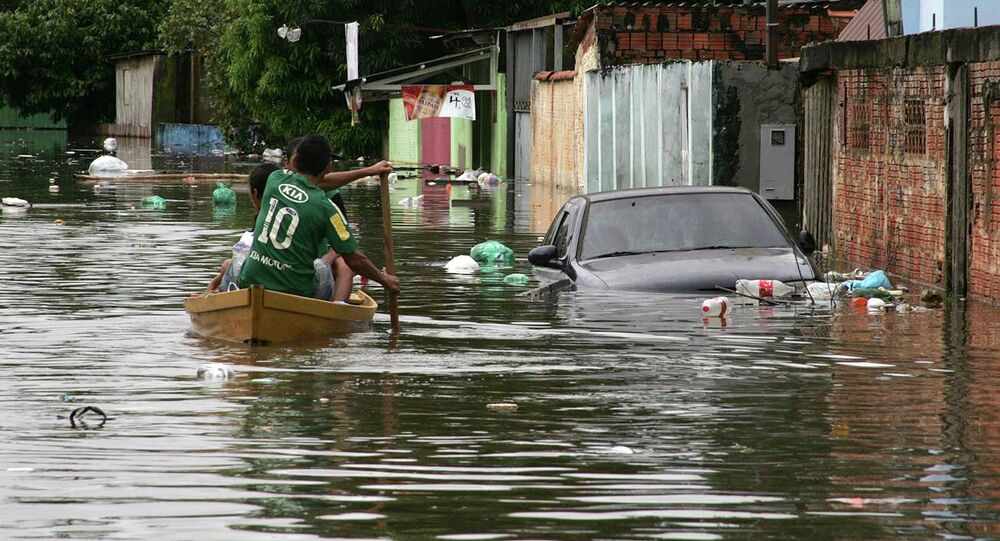 Severe Flooding in Brazil Forces More Than 80,000 to Evacuate

Weeks of heavy rain have caused the River Acre to burst its banks, with emergency services estimating at least 75,000 people in the state of Acre have been affected, and more in Bolivia and Peru.

© AP Photo / Karel Navarro
At Least 20 People Dead in Peru Amid Floods – Civil Defense Agency
Flooding in the northwestern Brazilian state of Acre has affected more than 80,000 people, according to media reports, after the River Acre, which runs through Peru, Brazil and Bolivia, overflowed at the end of February.

Local authorities report that as of March 3, almost 7,500 evacuees are living in shelters in Rio Branco, the state capital, alone, with floods reported in 53 districts; over 24,000 buildings have been affected.

On February 27, the WHO-affiliated Pan American Health Organization reported that a "State of Public Calamity" had been declared in the Departments of Acre, Amazon, and Santa Catarina as a result of the rise of the Acre River, which is reported to have reached a level of more than 18 meters, far surpassing its usual depth; local authorities have said that in some areas the river is up to 14 meters above its usual level.

© AP Photo / Richard Drew
Shocking Sea Level Rise Off New York Promises Future Floods
On February 23, neighboring Bolivia declared a state of emergency after more than 4,000 people were forced to leave their homes in the northern town of Cobija as a result of the flooding. The Bolivian government announced that neighborhoods located close to the river would have to be relocated, and the mayor of the town of San Pedro de Bolpebra, which lies on the banks of the river close to Bolivia's borders with Peru and Brazil, told the media that a new town would have to be built after the settlement was almost completely destroyed.
...
Reddit
Google+
Blogger
Pinterest
StumbleUpon
Telegram
WhatsApp
45