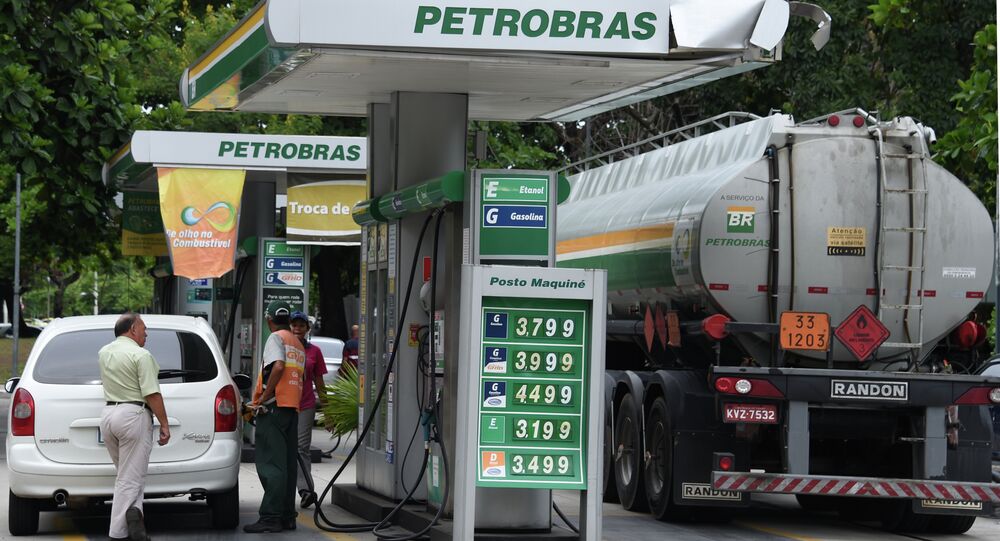 Federal prosecutors have asked the Supreme Court for permission to investigate 54 people in connection with an ongoing corruption investigation into South America's largest corporation.

© AFP 2021 / VANDERLEI ALMEIDA
Petrobras Shares Tumble Following New CEO Appointment
A spokesman for the Brazilian Supreme Court has confirmed a request from Brazilian Attorney General Rodrigo Janot to launch investigations into 54 individuals, many of whom are said to be high-ranking figures in politics, in connection with a corruption scandal at Brazil's majority state-owned energy giant.

The investigation into corruption at Petrobras, named 'Operation Car Wash,' was launched in March 2014 when the first arrests were made after federal investigators uncovered evidence of a fraudulent scheme under which executives at Petrobras and other companies set the price of contracts artificially high, and pocketed the resulting difference. It is alleged that some of the illegally gained funds ended up with Brazil's ruling Worker's Party, while other money was pocketed by the individuals who were implicated in the scheme.

Paulo Roberto Costa, a former director of the company who was among the first to be arrested, became a state informant in August and gave the names of 12 senators, 49 deputies and one governor who had received embezzled funds from Petrobras. Politicians from three parties were on Costa's list of names, one of whom was Joao Vaccari Neto, treasurer of Brazil's ruling Workers' Party. Costa alleged that politicians received a 3 percent commission on Petrobras contracts during his time with the company, from 2004 to 2012.

© REUTERS / Sergio Moraes
Petrobras Corruption Probe Complicates Support for Rousseff
In November, Brazilian police arrested at least 18 people who were suspected of being involved in the scheme, including top executives of companies which had contracts with Petrobras, in an operation involving more than 300 police and 50 tax officials. In December 35 individuals, including executives from some of the country's largest construction firms, had charges filed against them. "These people stole the pride of Brazilians," Attorney General Janot told a press conference, adding that the investigation is "far from being at an end."

Brazilian President Dilma Rousseff, a member of the Worker's Party, told the media that the scandal "is a symbolic case for Brazil," and "will change forever the relationship between Brazilian society, the Brazilian state and private companies."

In February the chief executive of Petrobras and its broad of directors, of which President Rousseff herself was chairwoman  from 2003-2010, left their posts amid growing calls for their resignation as the scandal gained traction; Petrobras' share price has fallen by 70 percent since September.

Supreme Court Justice Teori Zavascki, who received the petitions on Tuesday from Attornery General Janot, is set to decide in the next few days whether to approve the investigations and release the names of those under suspicion of involvement in the scheme.

Petrobras, which until 1997 held a legal monopoly on oil production in Brazil, accounts for over 90 percent of the country's total oil production, with an average output of 2,539,000 barrels a day. In 2010 the Brazilian government increased its stake in the company to 64 percent after a share offering which gave it the third largest market cap among the world's oil-producing companies after ExxonMobil and PetroChina.

Dilma Rousseff Sworn in for Second Term as Brazilian President