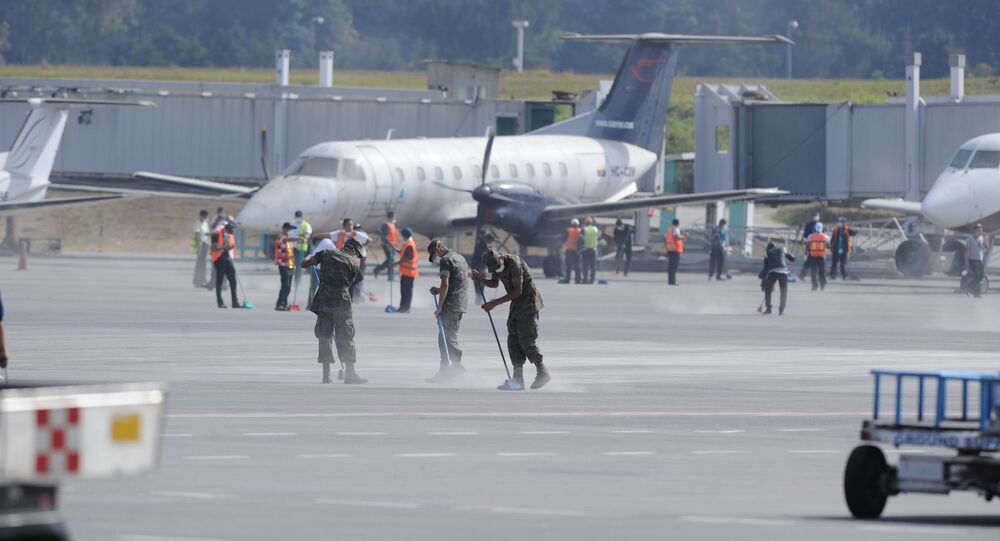 Guatemala's National Coordination for Disaster Reduction has evacuated at least 100 people in the vicinity of the volcano, advising others to stay in their homes as ash continues to blanket the south of the country.

© AP Photo / Moises Castillo
Guatemalan Fire Volcano Wakes Up, Country on Alert
Guatemala's Volcan de Fuego, 'the Fire Volcano', which has been showering the south of the country with ash and debris, has resulted in evacuations and the temporary closure of the capital's international airport. Casualties have also been reported, among them 13 injuries and 3 deaths.

The volcano closed Guatemala City's La Aurora International Airport over the weekend as columns of ash landed on the runway and blocked visibility.

The Twitter account of Guatemala's National Coordination for Disaster Reduction (CONRED) reported late Sunday night that three people had been killed and 13 injured.

Officials say that the volcano has forced the evacuation of at least 100 people in the area, and has resulted in the closure of schools in the Sacatepequez area. CONRED warned residents in the country's south to stay in their homes, wear masks or wet clothes to avoid the inhalation of contaminants, to cover their water tanks, and to be aware of evacuation routes in case things get worse.

The active volcano, 18,000 feet above sea level, is located about 60 kilometers southwest of the capital, near the Pacific coast, bordering the states of Chimaltenango, Escuintla and Sacatepequez. It erupted on Saturday, and has been spewing ash and rock throughout the south of the country ever since. The largest eruption in recent years occurred in 2012, when 35,000 people were evacuated.

Storm Cuts Off Traffic, Leaves Thousands Without Electricity in Norway

Five Dead, Over 100 Injured in Turkey Amid Heavy Storm