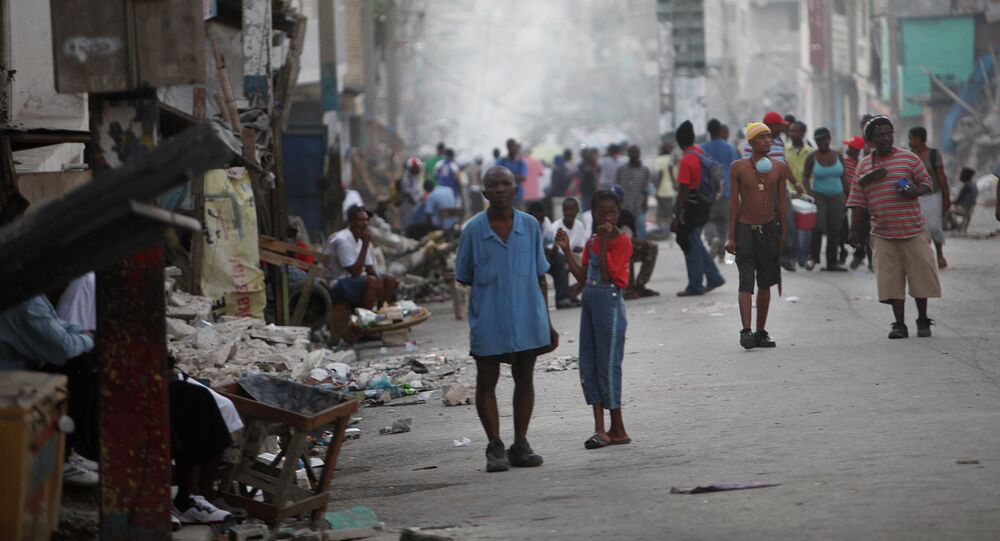 The Haiti's economic activity and health system is improving and is now better-able to handle a post-quake cholera outbreak that has claimed some 8,700 lives.

"The efforts of the Haitian people and their partners in the international community are yielding promising results, including four consecutive years of positive GDP growth," Clinton said in a statement Monday, stressing, however, that "there is still much more to be done to widen the circle of opportunity [in Haiti] and create the capacity for long-term development that relies less on foreign aid".

Meanwhile David Lowrance, director of the Haiti office of the US government's Centers for Disease Control and Prevention (CDC), said Haiti's health system is improving and is now better-able to handle a post-quake cholera outbreak that has claimed some 8,700 lives.

© Sputnik / Artem Tokarev
Thousands of Haitians Still Homeless After 2010 Earthquake: Amnesty Int'l
"CDC has made significant investment in the national laboratory and disease surveillance systems in Haiti," Lowrance said in a statement Monday, adding that these systems "are vital to preventing, detecting, and responding to public health threats before they become crises".

The situation was aggravated by tropical storms, and consequently by a cholera epidemic, which continues to this day.

On Sunday, UN Secretary-General Ban Ki-moon praised the progress that has been achieved in Haiti, but stressed that there is still a lot of work to be done in ensuring institutional stability and sustainable development in the country.

Weakening Response to Haiti Cholera Outbreak Could Have Disastrous Consequences