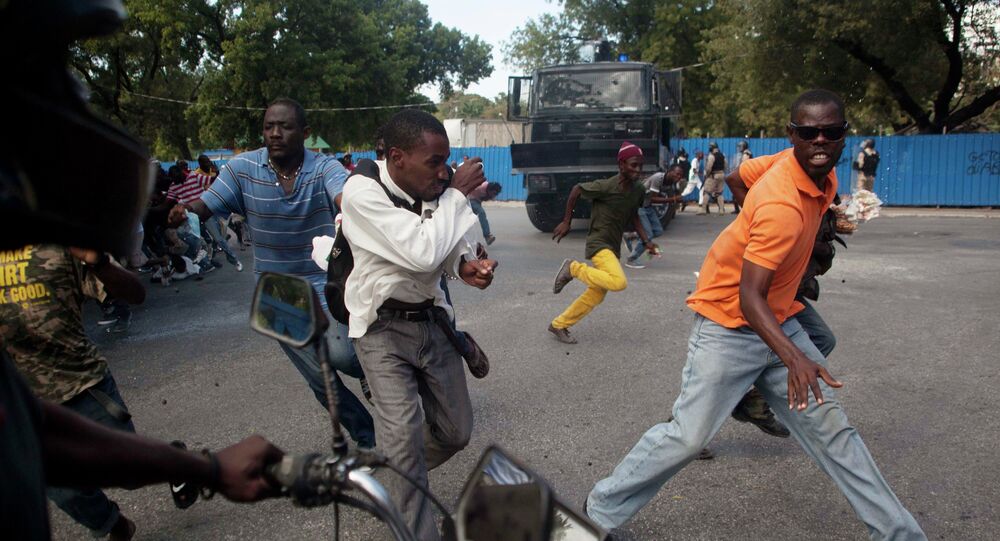 Protests in Haiti Continue Despite Efforts to Reach Election Deal

If no agreement is reached between the opposition and the government by midnight, the Haitian parliament will be dissolved. Protests have been going on since December 2014 when people took to the streets over delayed parliamentary elections.

The protests come ahead of the Monday deadline for the dissolution of the country's parliament. If no agreement is reached between the opposition and the government by midnight, the Haitian parliament will be dissolved.

Martelly was to call a general election back in 2011. However, no elections have occurred.

A wave of protests over the delayed elections in Haiti began in December 2014. Protesters accused the government of corruption and abuse of power. On Sunday, police in Port-au-Prince, the capital city of Haiti, fired tear gas on hundreds of protesters who were demanding the president's resignation, according to the BBC.

© AP Photo / Dieu Nalio Chery
Haitians Protest Current Government, Urge President Putin to Help
The opposition has repeatedly accused Martelly of plotting to rule by decree and have demanded his resignation. As a deal with the opposition, the country's Prime Minister, Laurent Lamothe, resigned on December 14 and was replaced by Evans Paul. This move has had no effect and the demonstrations have continued.

The ongoing political crisis has been exacerbated by the devastating 2010 earthquake which resulted in over 200,000 deaths, destroyed the country's infrastructure and left thousands of Haitians living in temporary camps.

Protesting in #Haiti is a combination of running with the bulls and carnival. Rara bands play, people dance and run. pic.twitter.com/44AOMIPsRJ