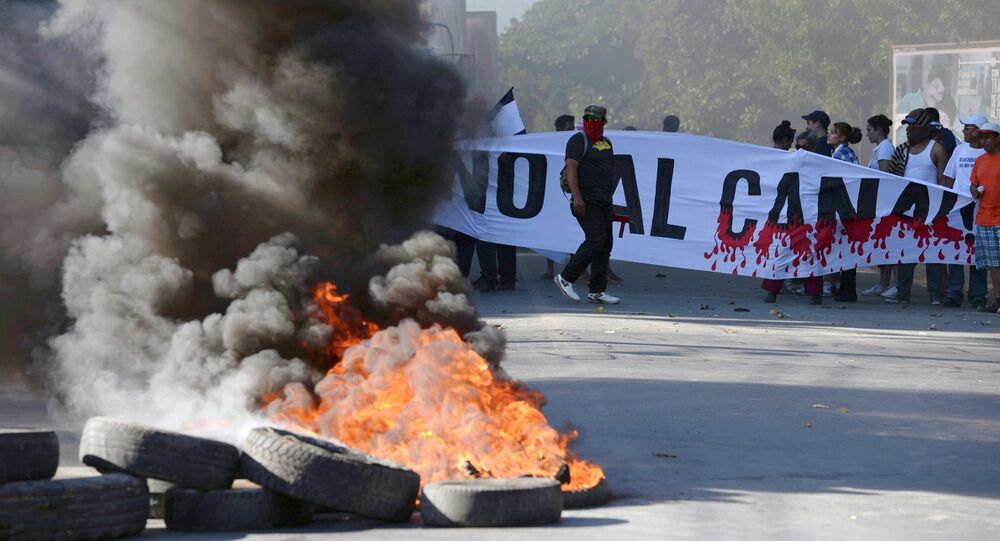 The farmers are dissatisfied with the compensation they were offered for their lands by Nicaragua’s left-wing government and the implementer of the project.

MOSCOW, December 23 (Sputnik) —The opening ceremony marking the beginning of works on a $50 billion interoceanic Panama canal Monday evening was marred by demonstrations as locals protested against mass displacements and environmental pollution.

© Sputnik / Yuri Nikolaev
Nicaragua to Start Interoceanic Canal Construction on December 24: Reports
The protesters blocking the roads were mainly comprised of the environmentalists and the farmers from 40 local villages, through which the construction will pass. The environmental activists fear the destruction of natural habitat, the pollution of Lake Managua – Nicaragua’s biggest source of fresh water — and the potential activity of nearby volcanoes.

The farmers are dissatisfied with the compensation they were offered for their lands by Nicaragua’s left-wing government and the implementer of the project, the Hong Kong Nicaragua Development Investment (HKND) group.

According to the various estimates, the project will also displace between 30,000 and 120,000 people that live along the canal’s future route.

"This project will bring no benefit to the people of Nicaragua, it will only benefit the Chinese," Danilo Lorio, the leader of protests on the western shore of Lake Nicaragua told South China Morning Post. "The compensation offer for our lands is ridiculous."

The 173-mile-long Nicaragua canal, designed to rival the Panama canal, will link the Pacific Ocean with the Caribbean Sea. The ambitious project includes the construction of an international airport and two ports capable of handling ships carrying up to 25,000 containers. According to The Guardian, the Panama canal is currently able to handle the ships carrying no more than 5,000 containers — this figure will reach 12,000 containers after the expansion of the canal that is already underway and due to be completed by 2016.

The Nicaragua canal project is expected to be complete by 2020 and will cost a total of $50 billion. The contract allows the HKND to operate the canal for 100 years.

No environmental impact report regarding the construction has ever been released to public.