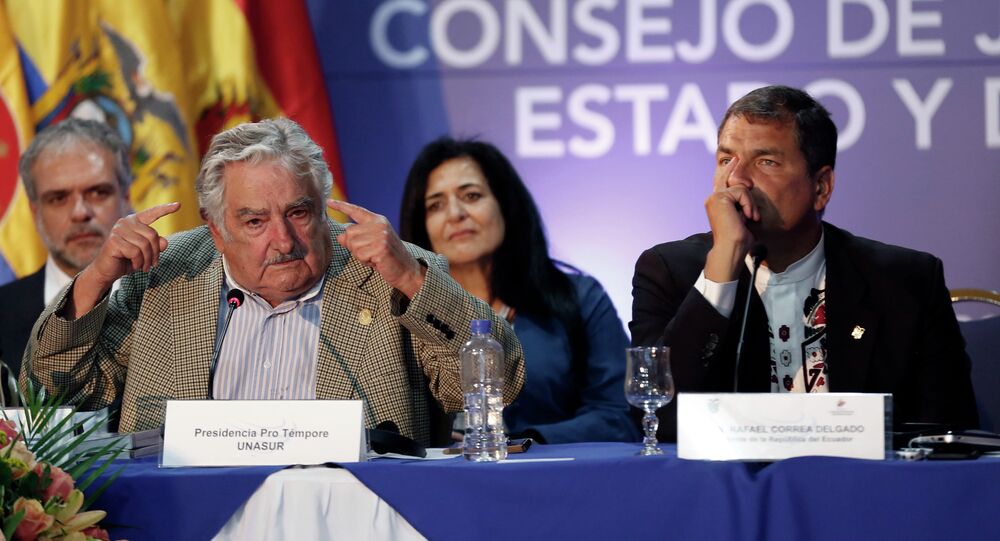 Russian officials are attending the Union of South American Nations summit this week, with the possibility of signing an agreement on cooperation between Russia and the intergovernmental organization.

MOSCOW, December 5 (Sputnik) — A representative from the Russian Foreign Ministry is set to attend the Union of South American Nations (UNASUR) summit, which will include discussions on a possible memorandum on improved cooperation between Russia and UNASUR, Telesur reported.

The summit is being held Thursday and Friday in Guayaquil and Quito, Ecuador; it will be attended by Alexander Shchetinin, the director of the Latin American Department of the Russian Foreign Ministry.

Every country in South America is a member of UNASUR, with the exception of French Guiana, which is a Department of France. Russian Ambassador to Ecuador Yan Burlyai had told Russia’s TASS information agency that Shchetinin is expected to meet with UNASUR Secretary General Ernesto Samper to discuss the possibility of a memorandum of cooperation between the UNASUR’s General Secretariat and the Russian Foreign Ministry.

Burlyai also noted that the Russian delegation will convey a message from President Vladimir Putin to Ecuadorean President Rafael Correa.

Burlyai explained that Russia’s interests coincide with UNASUR’s in the development of a politically and economically multipolar world, and that Russian engineering, technical knowhow, and equipment may be useful for regional development projects in areas such as railway construction and energy generation facilities. He noted that “for many decades,” South America was “mainly oriented at Western countries in economic cooperation…Now it is quite useful for them to have the alternative [of using] Russian companies such as Russian Railways, Gazprom and Rosneft.” Russia, on the other hand, stands to benefit from increased economic and trade cooperation with the 12-nation bloc, with its combined population of 400 million people and a $4 trillion economy. Latin America has already assisted Russia in its efforts toward trade diversification following the introduction of sanctions and countersanctions over the ongoing conflict in eastern Ukraine.

The UNASUR summit, with the participation of Russian Foreign Ministry officials, follows Putin’s annual State of the Nation address to the country’s Federal Assembly on Thursday, where he stressed the importance of Russia’s increasing economic cooperation with Latin America, Africa, the Middle East and Asia.

The UNASUR bloc, which became a legal entity in 2011, is an intergovernmental union composed aimed at regional economic and political and defense integration of South America. It comprises 12 countries, including the four members of the Andean Community of Nations, Bolivia, Colombia, Ecuador and Peru; the members of Mercosur, Argentina, Brazil, Paraguay, Uruguay and Venezuela; as well as Chile, Guyana and Suriname, with Mexico and Panama as observers.