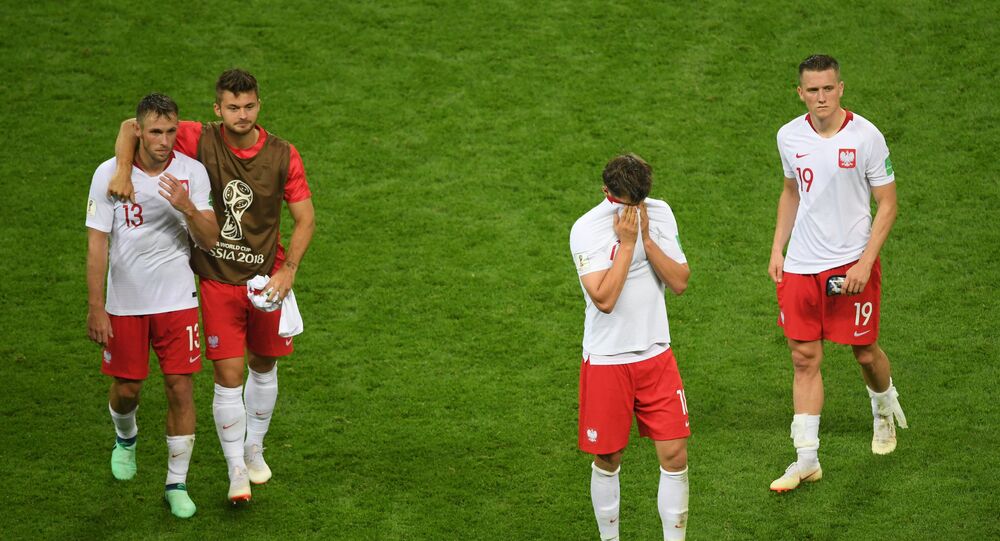 KAZAN (Sputnik) - Poland head coach Adam Nawalka apologized on Sunday for his side's crushing 3-0 defeat at the hands of Colombia in the Group H match, which eliminated Poland from the FIFA World Cup.

Colombia opened the scoring late in the first half through defender Yerry Mina. Radamel Falcao doubled Colombia's lead in the 70th minute with a clinical finish and Juan Cuadrado made the game safe with 15 minutes to go.

"We played as well as we could. We lost to a strong team. The game was equal until the first goal. We changed our scheme of play, started

© Sputnik / Alexander Kryazhev
Colombia Defeats Poland 3-0: Chance for FIFA World Cup Playoff Looms
Adam Nawalka also said that his side was well-prepared physically and was not affected by the hot weather in Sunday's knockout defeat to Colombia in Kazan, however, had lost to the better team.

“I don’t think that the heat affected us. Physically we were well-prepared, but our opponent was better. That is why we couldn’t match them,” Nawalka told reporters at the post-match press conference late on Sunday.

In turn, Poland midfielder Maciej Rybus said that the team had played well for 15 minutes against Colombia in Sunday's Group H match, but then something "went wrong" with their opponents punishing Poland with three unanswered goals.

"Today we've played against a very good team. A better team than we are… We played well for the first 15 minutes and then something went wrong and the opponent punished us," Rybus told journalists on Sunday.

"We'll be preparing for the next match, we want to win. We understand that we won't be able to make it into the knockout stage but we have to play for our fans and give them a little to cheer about. It's well-understood that everyone is upset, we are too. It's a pity that we've lost two games," Rybus said.

"Colombia were better than us as a team, both technically and tactically. We couldn’t do anything. They were so much better, so ahead of us. We lacked skills. They are the strongest team that we faced over the past few years. Even Germany and Portugal were easier to play against,” Lewandowski told journalists late on Sunday.

The Poland captain added that his side only had themselves to blame for exiting the tournament and they should have played better in their opening match against Senegal.

FC AS Monaco and Colombia captain star striker Radamel Falcao, who missed the previous tournament in Brazil due to a knee injury, netted his first World Cup goal during Colombia’s solid 3-0 victory over Poland in Sunday's Group H match. Midfielder james Rodriguez, in turn, made two spectacular assists and was named as the man of the match.

"Falcao did not play at the FIFA World Cup four years ago, but he was a part of our team. Now he is with us on the pitch and he deserved the goal. He has been working hard to be here. He has been waiting for that goal for four years, and we are waiting for him to score again," Rodriguez told journalists on Sunday.

© REUTERS / Ricardo Moraes
Japan Beats Ten-Man Colombia 2-1 in Teams' 1st Match at 2018 FIFA World Cup in Russia
Meanwhile, Colombia midfielder Abel Aguilar sustained an injury in Sunday’s group stage game with Poland. Aguilar was unable to continue the game 30 minutes into the first half and had to be carried away on a stretcher. He was replaced by Mateus Uribe.

Colombia head coach Jose Pekerman explained that Aguilar felt pain after raising his leg too high. “We need to perform an examination to find out what happened to him. I hope he will recover soon,” the head coach told journalists at the post-match press conference.

Earlier, the media reported that Sanchez, who conceded a penalty and was sent off three minutes into Colombia's 2-1 defeat at the hands of Senegal on June 19, had received death threats.

"I would like to mention Carlos Sanchez, who has had a rough few days. We dedicate our victory to him," Pekerman told journalists. The head coach added that he could not confirm that Sanchez had been receiving death threats.

"I cannot confirm that [the information about threats to Sanchez]. He has been very emotional about his mistake… It's a very touchy subject for Carlos," Pekerman said.

© Sputnik / Maxim Blinov
Colombia Midfielder Sanchez Picks Up First Red Card of 2018 FIFA World Cup (PHOTO, VIDEO)
Colombia have three points and currently sit third in Group H behind Senegal and Japan, who both have four points. They can still reach the round of 16, but will most likely have to beat Senegal in their final group game, which will take place on Thursday.

Poland have now been defeated in both of their group matches, losing to Senegal 2-1 in their first match of the World Cup and are bottom of Group H with zero points. Poland will play Japan in their final game on Thursday before heading home.

The 2018 FIFA World Cup kicked off on June 14 and will continue until July 15, with the matches being played in 11 cities across Russia