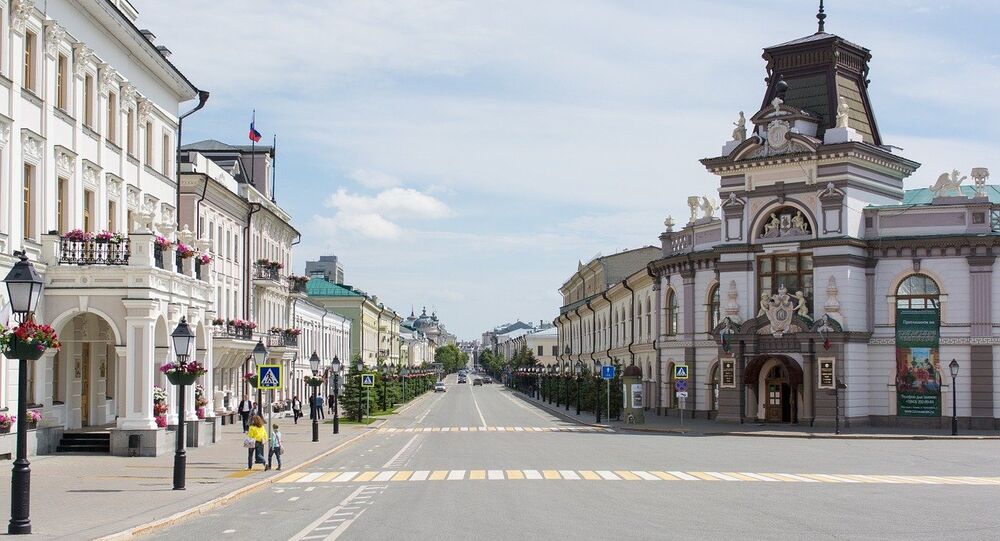 Tatarstan's capital Kazan is one of the cities which will play host to the 2018 FIFA World due to kick off in Russia in June. Sputnik has created an unmissable to-do list for all the tourists and fans who will be in Kazan during the main footballing event of the year.

The national Tatar cuisine is something even the most discerning tourists will appreciate – it’s not only very tasty it’s also quite cheap!

When in Kazan, you must try echpochmak, an appetizing pasty with meat and potatoes, as well as chak-chak, a dessert which is made of dough filled with Kazan-made honey and which is used to greet guests.

The Old-Tatar Sloboda is a historical district of Kazan, where local poets and 'enlighteners' once lived.

Walking across the streets of the old Tatar settlement, one can see authentic wooden houses, monumental mosques and cozy courtyards. In the numerous artisan shops you can find original handmade souvenirs.

Syuyumbike is a leaning tower in Kazan which is enveloped in myths. Legend has it that in the 16th century, the Queen of Syuyumbike decided to commit suicide by jumping from the tower in a show of protest against Russian Ivan IV the Terrible's proposal to marry her.

There is also a legend that if you lean your head or your back against the tower and make a wish, it will almost certainly come true.

The Cat of Kazan

Kazan cats are said to have saved the Winter Palace in St. Petersburg from rats in the past, and their descendants currently protect the St. Petersburg State Hermitage Museum's masterpieces from rodents.

© Sputnik / Maksim Bogodvid
The sculpture of the Cat of Kazan. (File)

The Cat of Kazan monument is installed on the city's Bauman Street where residents and tourists can pat the bronze animal just for luck.

The miraculous list of the Icon of the Kazan Mother of God was transferred to Kazan by then-Pope John Paul II in 2005.

Nowadays, it is kept in the Holy Cross Cathedral, which was built on the historical site where the icon was found.

Pancakes Made on Sviyazhsk Island

The island city of Sviyazhsk located thirty kilometers from Kazan is known for its delicious treats, such as domestically made bread or flat cakes.

© Sputnik / Maksim Bogodvid
The Cathedral of the Joy of All Who Sorrow, on the right in the background, in the island town of Sviyazhsk

The town of Great Bolgar near Kazan includes the remains of an ancient Bulgarian civilization on the Volga River, such as fortifications, the famous White Mosque and many more artifacts.

In the museum-exhibition complex "Memorial sign in honor of the adoption of Islam by the Volga Bulgars in 922," tourists can see the world's largest printed Koran, the sacred book of all Muslims.

Selfie Near the Farmers' Palace

The unusual facade of the Farmers' Palace continues to attract tourists and photo bloggers from all over the world.

The facade's central feature, which is built in the form of the "tree of life", is said to be especially suitable to make selfies.

Frogs and the Raifa Monastery

Raifa Monastery is a friary located not far from Kazan.

A picturesque pond where frogs live is situated near the monastery and legend has it that the frogs do not croak so as not to interfere with the prayers of the monks.

The State Theater of Galiassgar Kamal

The theater presents various performances in the Tatar language, including comedies, dramas, musicals, as well as masterpieces of world classics and works of national authors.

Simultaneous translation into Russian and English is provided for those spectators who do not speak Tatar.

Apart from Kazan, ten more Russian cities will host matches of the 2018 FIFA World Cup, due to be held between June 14 and July 15.These include Moscow, Kaliningrad, St. Petersburg, Volgograd, Nizhny Novgorod, Samara, Saransk, Rostov-on-Don, Sochi and Yekaterinburg.