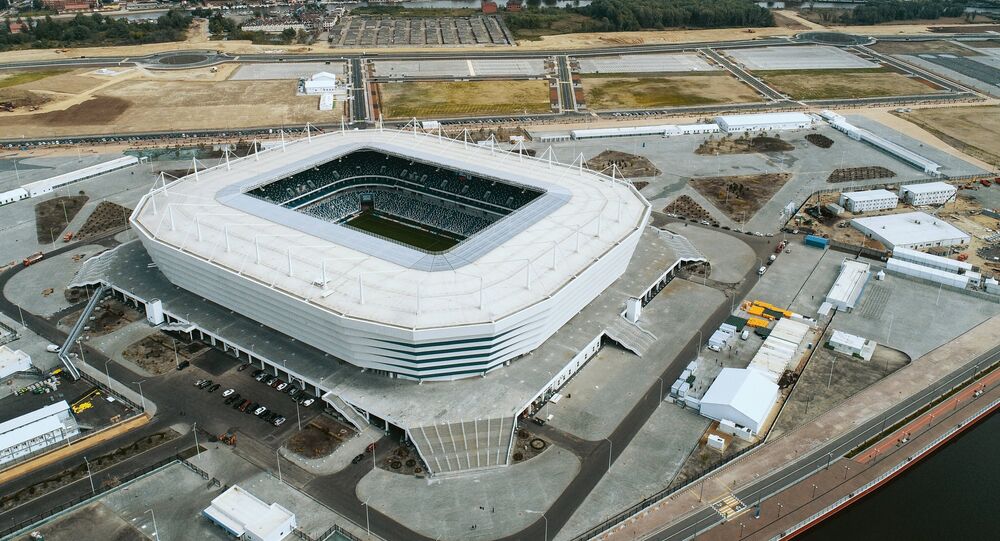 More than 17,000 volunteers from all over Russia and across the globe are at the 2018 FIFA World Cup. Valeria Alexeychenko and Martin Lewis are volunteers, they're working in Kaliningrad.

Unique, extraordinary, special… These are the words that best describe people who've dedicated their lives to helping others. Some may say that volunteering is heroism and self-sacrifice, but volunteers don't see it this way. It's perfectly normal for them to be in the midst of events, to be involved in major goings-on and, as cliché as it sounds, to be useful to the world and society.

"Hello, my name's Martin. Nice to meet you. How are you?"

Martin is 72. He's only been volunteering for 6 years, but he's already been to many big events, including some global ones. He was a volunteer at the Olympic Games in London and Rio, the European games in Baku, Azerbaijan and some other European sporting events. It all started with the 2012 London Summer Olympics.

"I returned to England after having lived in Brazil and only by chance I saw an advertisement for volunteers. It was a very good chance. I worked with the other volunteers at the Olympic Games and I found that volunteers are the best people in the world," he says.

It was difficult to be selected because of the enormous number of applicants. About 250,000 potential volunteers were interviewed to select 70,000 highly-qualified and highly-educated individuals, many of them knowing more than one language.

Before the start of the World Cup Martin decided to learn Russian, so for 2 months before he arrived Russia every morning he listened to an app and learned a few more words every day. He's already learned the days of the week, months and numbers; he knows some everyday phrases. Martin admits he's got problems with listening: "Different people have a different skills, mine is talking. I can talk more easily than listen."

Martin works in the ticket clearing sector and that's to help the ticketing staff when there are problems with the tickets. Sometimes the barcode readers don't work properly and the barcode can't be scanned for some tickets.

"This may be one in 5,000, a small percentage but always it happens at different events. And when this happens it's just before the game starts so many people are running to try to get this fixed and we help the people who fix it by organizing the spectators," he says.

© Photo : Secretariat of tourism Aguascalientes
Mexican ‘Day of the Dead’ Parade Held in Russian Capital (PHOTO, VIDEO)
On June 28, the England-Belgium match was held in Kaliningrad, which Martin's looking forward to not just because his team playing but because he was going to take part in it — he'll carry the flag before the start of the game. That's very honorable; he's going to tell this to his two children and four grandchildren. He says his family's very supportive and proud of him.

"We exchange messages every day, and photographs and I think probably in the future they will do volunteering."

Martin looks good for being 72. "I take care of myself, with my eating habits and also with sports. I play football every week at a good level. While I've been here at the dormitory we've played every two or three days. And I have organized all of the football."

READ MORE: Make Football, Not Love? Who Can't Have Sex at FIFA World Cup in Russia

Martin is leaving Russia in a couple of days. He says his most precious experience is the memories and the energy he felt at the World Cup. He's planning to go to Japan for the 2020 Olympics. Martin's also planning to come back to Russia. "My partner lives in Germany, next year we're coming to Russia on holidays. We'll do the historic cities — we'll spend 2-3 days in Moscow, 2-3 days in St. Petersburg, then we'll do some smaller cities."

"I don't have as much volunteering experience as Martin but hopefully that's yet to come," Valeria Alexeychenko says.

Valeria is 21, she's already volunteered for some events, the 2017 World Festival of Youth and Students was the largest one. At the World Cup she's using the experience she gained there though she was accepted very late.

"They were asking why I was doing that, but I just wanted to get involved in a global event like the World Cup. It may sound ambitious, but I wanted to make my mark on the world, be part of a great team. Volunteers have very positive energy and I wanted to be part of such a huge event," she says.

Valeria studies passenger and cargo transportation engineering at the Immanuel Kant Baltic Federal University.Maybe it was her major that contributed to her "GrabNDrive" project of reaching the final of the "2018 FIFA World Cup Voluntary Heritage" national social projects competition which is now going to be implemented.

"We're helping other volunteers find alternative routes around Kaliningrad. The GrabNDrive program is a kind of a database of driving volunteers. If a volunteer needs to get to work, they ask for transport and get help," she explains.

GrabNDrive has already gained popularity among Kaliningrad's volunteers so Valeria's jokingly calling herself a volunteer for volunteers.

"There's a huge volunteer center at the stadium. Every day it hosts various interesting events — we get speakers telling us about their lives and sporting achievements. In our free time we dance, listen to music and enjoy ourselves. We're like a big family, there are so many people and we've become very close, that's really exciting!"

Valeria admitted the volunteers' schedule was really hectic — on game days they may be work more than nine hours a day.

Volunteers are really into what they're doing. They say, if you've tried volunteering, "there's no going back"! Volunteer once — volunteer forever.

"I think many volunteers hear words like ‘stop it, you're never home, we hardly hear from you, we're worrying.' But once you tell your family about all the experiences and emotions you get, once you tell them you're carrying the flag, they see your motives. These emotions are things to remember, these are the things we'll tell our families — Martin will tell his grandchildren and when I have children I'll definitely tell them about this. It's stunning, it's inexpressible, it's overwhelming," Valeria says.