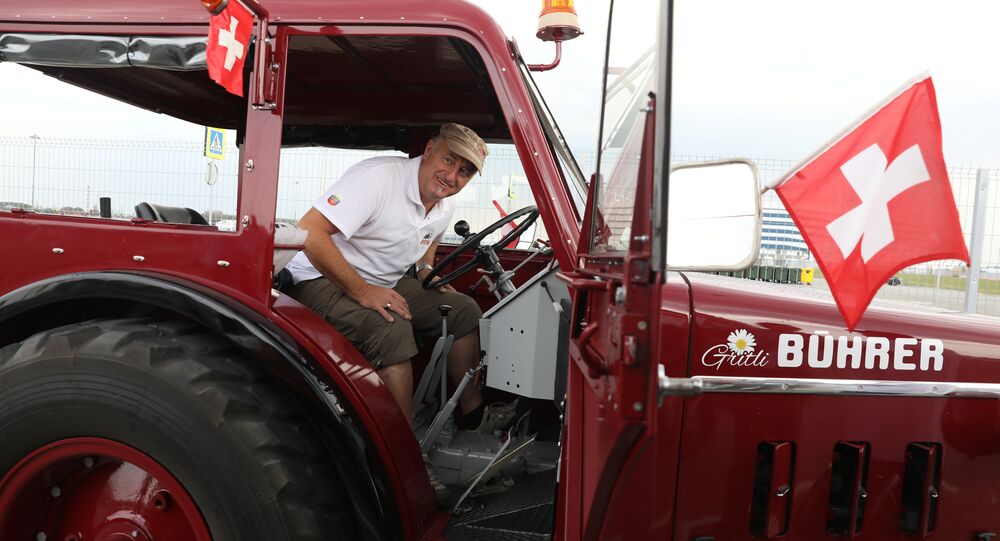 GENEVA (Sputnik) - Three Swiss fans arrived in Kaliningrad by a tractor on Thursday, the football enthusiasts said, just in time for the match between Switzerland and Serbia, which will be played in the western Russian city on Friday.

Beat Studer, Werner Zimmermann and Josef Wyer set off from the Swiss city of Lucerne on June 8, traveling to Kaliningrad in a vintage tractor through Germany and Poland and driving at an average speed of 19 miles per hour.

"Stupid ideas come only when you are a little bit drunk," Wyer was quoted as saying by the UK-based media outlet The Sun.

According to British media reports, Beat Studer, who runs a tractor museum, and two of his friends came up with the idea to visit Russia after their national team qualified for FIFA 2018 World Cup Finals. However, their plot was to undertake anything positive, so they have opted in favor of an unconventional transport.

Moreover, the journey is described as "a fan trip with a good cause." Three friends decided to devote their adventure to Swiss children's charities and have raised already nearly $20,000. All the money they receive from donations will be given to Joy Prevails, a foundation created by former Swiss President Adolf Ogi.

© REUTERS / Vasily Fedosenko
Diehard Fan Arrives in Moscow From Germany on Tractor to Watch FIFA World Cup
According to the story of Swiss fans, the trip was quite calm. However, just before entering the Russian border zone, Studer, the driver, was breathalysed by the police officers in Poland for suspected drunk driving.

Switzerland, who held Brazil to a 1-1 draw in their first World Cup game, will face Serbia on Friday and then will take on Costa Rica on June 27 in their final Group E match.